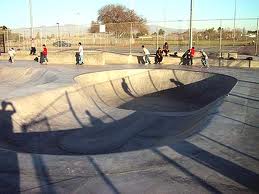 The San Benito County Board of Supervisors on Tuesday approved a lease extension with the city of Hollister, which will allow for expansion of the city-operated park into an adjacent basketball court at Veterans' Memorial Park. The approval, while unanimous, was not without some issues raised by Supervisor Anthony Botelho, who questioned the logic of the city choosing to expand an existing facility rather than spend money in other areas of the city.

"I appreciate Hollister wanting to put more of an investment in a county park (but) was is Hollister's logic or the parks commission's logic?" he asked at the supervisors' meeting. "Why doesn't Hollister put a skateboard park at the Brigantino (Park) area on (Hollister's) west side? Is that (current) skateboard park so impacted or there's so little money available that we can't have a skateboard park on the west side of Hollister?"

Sara Fontanos, a management analyst for the county, said the expansion of the current facility would cost much less than a new park.

"There is the extra space already right next door," she said, noting that she expects the city to seek funding for a new park through grants or development fees in the future.

Botelho then added, "I'd like to see some sort of emphasis on the west side of Hollister. I see a real need over there."

Supervisor Jaime DeLaCruz said the county should help the city build a skate park and that he, too, believes the city is seeking the short-term solution of an expansion of the current park "with the long-term idea of building a big one" in five to 10 years.

Supervisor Robert Rivas said the expansion plans don't address needed infrastructure improvements such as lighting and parking. "There are certain times in the day when it's really impacted out there" parking-wise, he said.

Speaking in favor of the expansion agreement, Supervisor Margie Barrios said, "any time we can have immediate solutions for the needs of kids, I have to support this effort. I think it's going to be really well used. There's already high demand."

Supervisor Jerry Muenzer said he believes Vet's Park is "overdeveloped and over-utilized already," though he supports the expansion of the skate park because it will be in an area of the park that is already developed as a little-used basketball court.

Hollister City Councilman Raymond Friend, addressing the board during the public comment section, said he spent several days watching youth utilize the skate park, as he had concerns about safety at the Memorial Drive facility.

"I was amazed at how those kids policed themselves," he said. "There was no body pushing anybody. If they were on BMX bikes they waited their turn." He also pointed out that "it was the community that was behind" the expansion effort. "The city council didn't say we need to expand the skateboard park."

In response to a question from Botelho, Friend said he expected that a new skateboard park could be built at Brigantino Park "in 10 years."