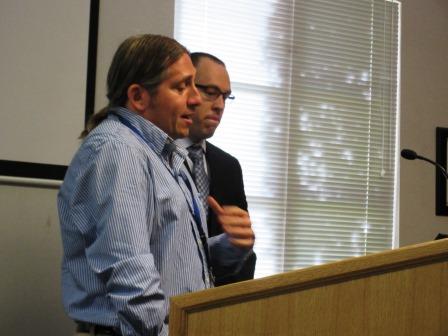 Approval of a proposed county ordinance that would allow collection of fees related to fire and other emergency calls was put off at the Aug. 4 Board of Supervisors' regular meeting.

District 1 Supervisor and Chairwoman Margie Barrios said the board needed more information and in-depth discussions before it could vote on the ordinance, which is the same one that was discussed by the Hollister City Council in May and eventually tabled.

Fire Recovery USA Regional Account Manager Bridget Bugbee presented to the Board the idea of “recovering revenues that can come back to the (fire) department.” The revenues could come from billing at-fault parties or from the insurance of the same parties. How much, whom to charge and other details could be determined later, Bugbee said.

She said that Fire Recovery needed the ordinance before a contract could be drawn and any recovered revenues can go back to the county.

Both District 2 Supervisor Anthony Botelho and District 4 Supervisor Jerry Muenzer said they wanted the Board to consider recovery cost when they saw the presentation at the Fire Committee meeting.

Botelho said, “the jury is still out on cost recovery; our services are at a bare minimum. We need more stations, more firefighters. We even need more police (officers).”

District 5 Supervisor Jaime De La Cruz was alarmed at the prospect of charging people who accidentally get hurt.

Bugbee clarified that, “80 percent of most emergency calls are medical (in nature) and the other 20 percent of calls are about motor vehicle accidents or hazmats. This other is what we’re targeting.”

She estimated that “There’s $60,000 to $70,000 annually that can potentially be taken back (from some damages caused by fire) to keep (the Hollister Fire) department open.”

District 3 Supervisor Robert Rivas said, “We’re short of revenues, but it’s challenging my understanding of government. It’s difficult to wrap my head around it. Citizens pay taxes for our services. This does not make sense. It disrupts our function as government. I can’t support it.”

Hollister City Manager Bill Avera observed that Rivas comments were the same as made by some city council members. But “the ordinance can be a stand-alone. It can only be for Hollister and not the whole of San Benito County or vice-versa. Those funds are earmarked for equipment, not staffing. We do suffer not keeping up on our equipment. They’re aging. We can always make a recommendation where to spend the money. And it’s not a whole lot of money,”

Newly introduced Fire Chief Bob Martin Del Campo related his experience helping out in hurricane devastated areas and said “even FEMA has fees. They operate nationwide. What works for the nation should work for us, too.”

Frequent board meeting attendee Marty Richman dismissed it as “Baloney! We don’t pay taxes for firemen to sleep and eat at the station. We do for them to respond. I have no problem with collecting fees. But everybody has paint thinner or gun powder (or other flammable or dangerous substances) in their garage. You can’t charge every time there’s an accident. You can sue (the) people (at fault), instead. The county gets sued anyway.”

Botelho said he didn’t disagree with the complaints, “But it’s about a small amount of calls. We do need equipment. We have additional costs. Maybe the sales tax, the revenue neutral in this County (might help.) Let’s not rule out anything without exploring everything. Maybe at the end of the day we won’t even do (cost recovery).”

Barrios said she personally supported cost recovery but that more information and discussions were needed. She tasked County Administrative Officer Ray Espinosa to put the matter on the next agenda.

Coinciding with the deliberations on cost recovery from fire calls was the introduction of Del Campo. He said that being in Hollister “felt familiar.” He cited Botelho, Avera and Rivas as former firefighters and fellow civil servants.

Barrios presented a certificate of Recognition to Don Kelley for his leadership to promote and develop the Parks and Recreation programs, services and projects.

Barrios said, “because of him, we have a plan for parks and recreation” and that Kelley “had a lot of vision.”

Kelley said he is “leaving (the commission for family reasons” but hopes to come back “to see the plan through.”

He said of his tenure, “it was a great ride” and “the fun and challenge was in forming partnerships.” He also said, “The plan is what you get when you listen to everybody.”

Emergency Services Manager Kevin O’Neill introduced to the Board National Weather Services’ Larry Smith, who presented the board with a Storm Ready sign and a certificate.

Smith spoke about the three to four months’ work when Emergency Services and National Weather partnered to make the county “ready for the next big weather emergency.” He said it was mostly improving communications between both groups, such as when a lightning storm hit south of San Benito.

Sheriff-Coroner Darren Thompson invited the board to Tuesday night's National Night Out. Traditionally held every first Tuesday of August, the event is meant “to enhance relationship between the community and the (law enforcement) services.”

Thompson said “Food, games and music” await everyone who comes.

He also appealed to each supervisor to bring swim trunks and go in the dunk tank “instead of me” between 5:30 and 7:30 when some county officials would take a soaking in the name of fun. He also said Del Campo will open the ceremonies at 6 p.m. with a flag salute.

All items in the consent agenda and regular agenda were approved in one of the shortest meetings of the board recently.