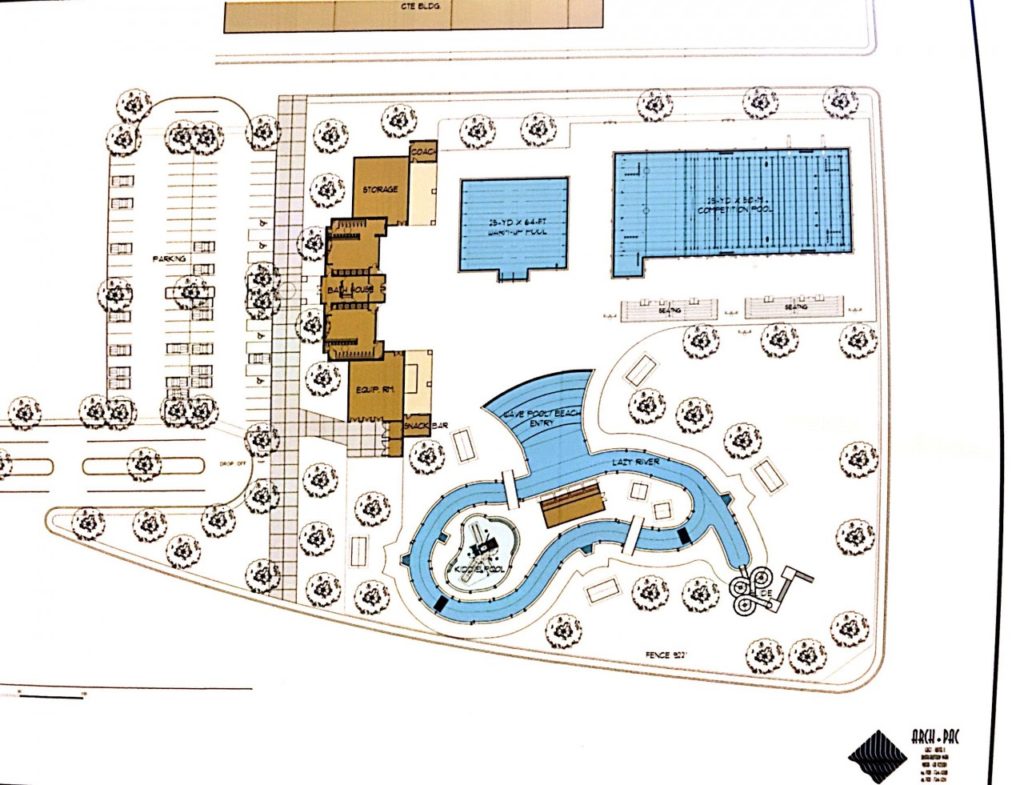 A rendition of what the proposed center would look like. While nothing is yet set in stone the pools would be located on the soon to be Nash bypass road. According to San Benito High School officials, it is estimated that approximately 60 percent of students don’t know how to swim. This year, with the help of Measure U bond funds, the school district set out to change that. In March, SBHS truseets authorized the acceptance of request for qualification applications for an aquatic center that would include a competition pool and a learn-to-swim pool on campus.

Partnering with Hollister for Aquatics, the district is embarking on something much bigger — an aquatic complex consisting of a water slide, above-ground water feature with shallow infant area, a lazy river, wave generator, beach entry, snack bar and meeting room.

Spearheaded by San Benito Aquatics head coach Jud Shutts and SBHS Trustee John Corrigan, the nonprofit organization was created after they saw the need for a place where the community could learn to swim and practice when the school closed its pools in 2015.

“When San Benito High School had to close their pools, a parent on the SBA team, John Corrigan, mentioned that it was horrible and now there was no where for the high school to practice or learn swimming," Shutts said. "We also realized that the local residents no longer had any water they could use for recreation. John has a son, Josh, at the high school and three younger daughters coming up, so he had a long-term interest. I saw a huge need for public water for the community as well as a competition venue to help develop our swimmers within SBA. We formed the Hollister For Aquatics nonprofit organization to get the pool(s) at the high school opened and developed a long-range plan for a new, world-class aquatic center that would become a destination attraction, bringing in visitors and tourist dollars and making the aquatic center profitable.

Shutts said they spent "hundreds of hours researching the pool manufacturers, going to clinics, talking to pool operators, coaches, manufacturers, architects, and politicians, developing a plan for an aquatic center that would be self-sustaining and bring in tourist dollars as well as meet the needs of the community.”

To make the pool complex profitable, Hollister for Aquatics is proposed to operate like a business. It would be responsible for generating the income to sustain the facility, running and scheduling programs, maintaining the costs, and hiring and firing employees. Available to the public seven days a week and during school hours for high school use, the pool complex is designed to sustain various programs for the community including water aerobics, swim lessons, YMCA programs, safety programs and swim meets. The school and complex would be separated during school hours.

“The competition pools were pretty easy to configure and meet the needs of the high school, but the recreational aspect is key to profitability," Shutts said. "Pools are expensive to build and to run so they need to generate programs that the community and surrounding areas are willing to pay money for. I feel that the current design meets those needs and will make the combination of the high school and recreation aquatic center the best in Northern/Central California."

Although he is now semi-retired, the former competitive athlete said he took this project on as a way to give back to the community. He started a Go Fund Me account to help reduce the amount of money needed from the city and county and to help with the operation of the aquatic center. Seventeen days in, the fund had raised $75 toward its $30,000 goal.

“My passion is for the community to have water for education and recreation that it hasn't had for two years and to give the youth something to do during the summer and jobs during the summer and school year and recreation for the community as a whole regardless of age and ability,” Shutts said. “Not everybody can play at sports, but everybody can use a pool.”

At the intergovernmental meeting on April 6, Shutts and SBHS Interim Superintendent Shawn Tennenbaum presented their vision for the partnership to committee members. While they hoped to get commitments at the meeting, they were instead met with mixed support.

District 4 County Supervisor Jerry Muenzer said, “I don’t know whether this can get my support without seeing private money — substantial private money.”

District 5 Supervisor Jaime De La Cruz said he thought an aquatic center was a wonderful idea but feared that the money would end up coming out of the county's General Fund. “It’s a wonderful concept but I promise that nobody wants to pay for that hidden cost,” he added.

Hollister Mayor Ignacio Velazquez said, “I’m committed to this — finding a way to do it without General Fund dollars.”

Hollister City Councilman Karson Klauer said, “I’m still a little wary on whether or not this will actually make money for all the parties involved because most things don't, at least from my point of view. Our programs usually don’t make money and if it does it barely makes it so then if we’re not going to make money my first concern is being able to teach kids how to swim and especially the lower-income, more economically-disadvantaged kids because they are the ones that can’t afford to go to somebody’s house and spend 20 bucks for a half-hour lesson. I just want to make sure that if this ends up happening, that pool needs to be available for those kids, we need to find a way."

Later in the discussion he added, “I look at this as a fairly risky endeavor for the city. I like that there is talk about other funding sources but I just don’t see how you’re going to come up with that much money except from the General Fund."

During public comment, Peter Hernandez said, “One of the things that keeps coming to mind is what the city and the county lose by not considering this more…There is a lot already lost in the fact that the city hasn’t grown, the county hasn’t grown, and if there is no investment, then there is no gain. At least if you are willing to put in that thought and time into what it would take for you guys to collaborate and make this work then I couldn’t see too much happening in Hollister as far as the public seeing any difference or any good reason in why they should stay here.”

While no action was taken at the meeting, the committee decided more research needed to be done.The Board of Supervisors is expected to discuss the matter at its April 11 meeting. 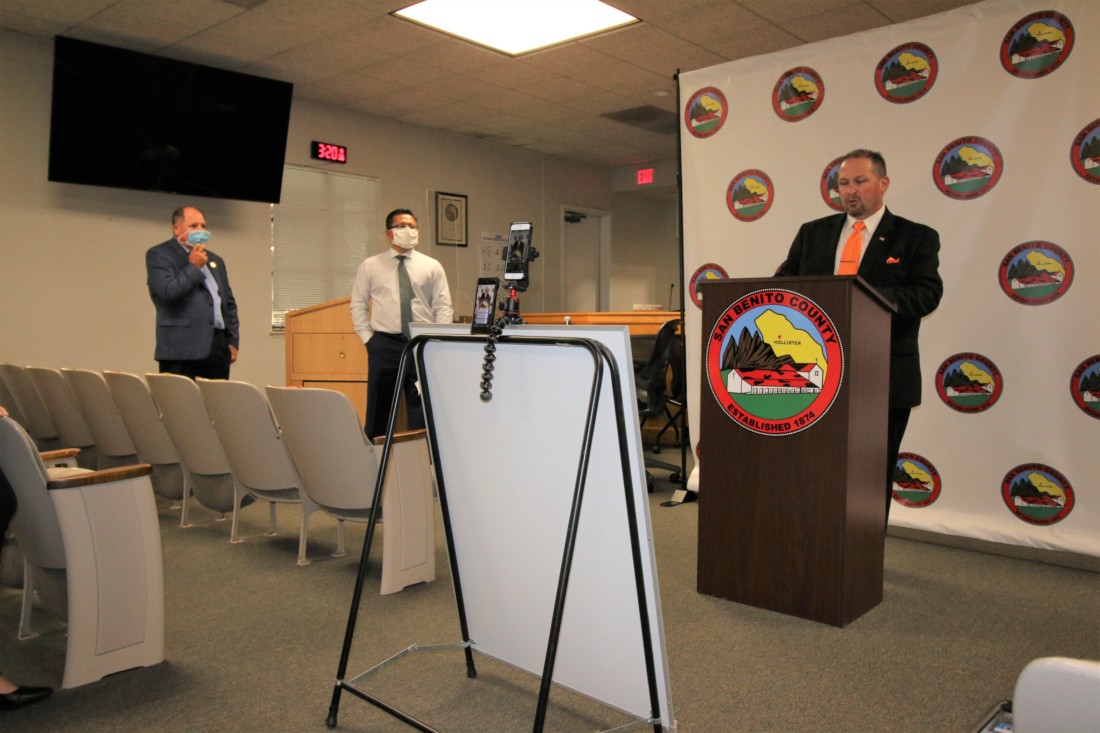 County to allocate $1.5 million in grants for small businesses

Funds will be managed by the Workforce Development Board and disbursed by Aug. 31. 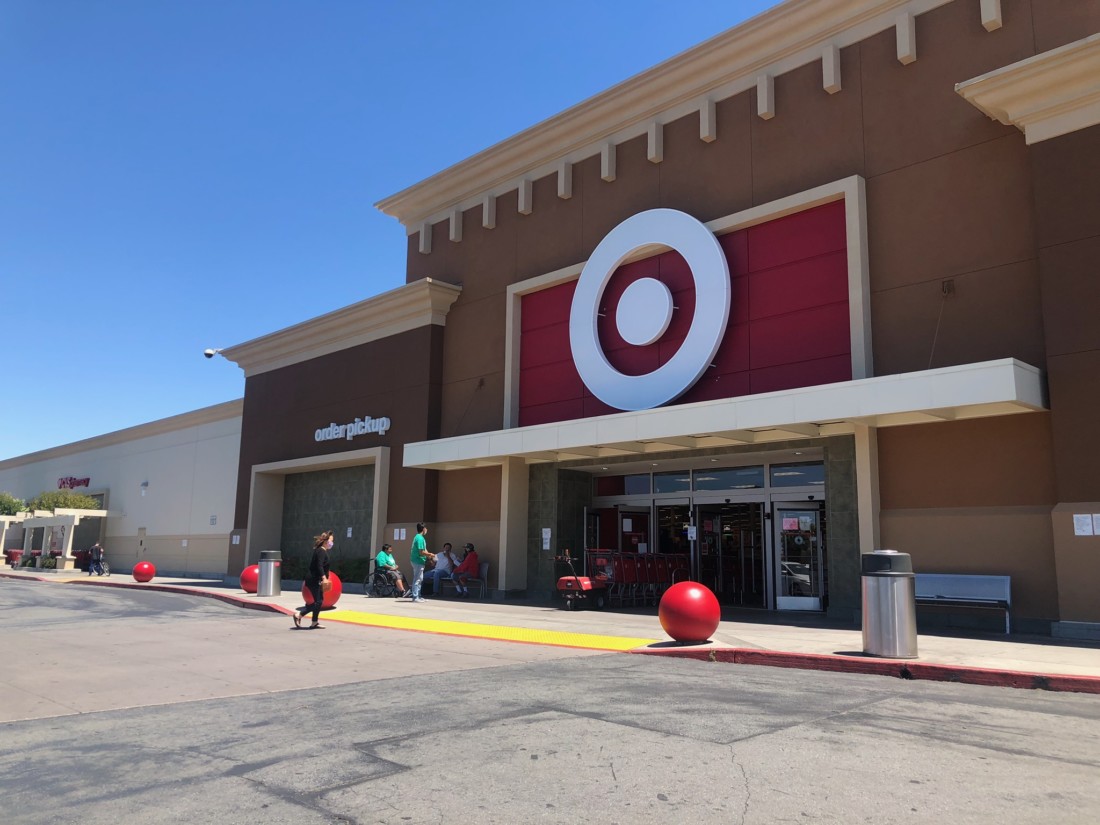 Five workers are on sick leave and in quarantine.