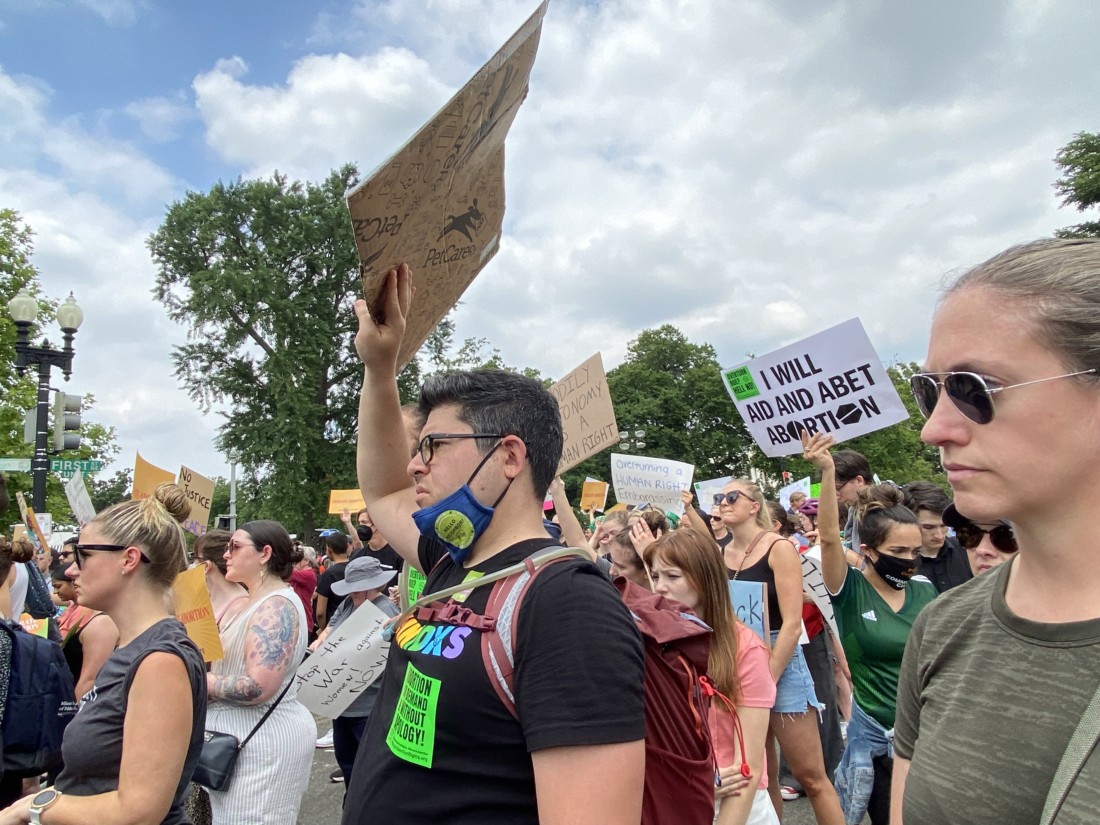 People protesting outside the Supreme Court Building June 24 after Roe v. Wade was overturned. Some protesters chanted obscenities at justices who voted to overturn the case. Photo by Jenny Mendolla Arbizu. 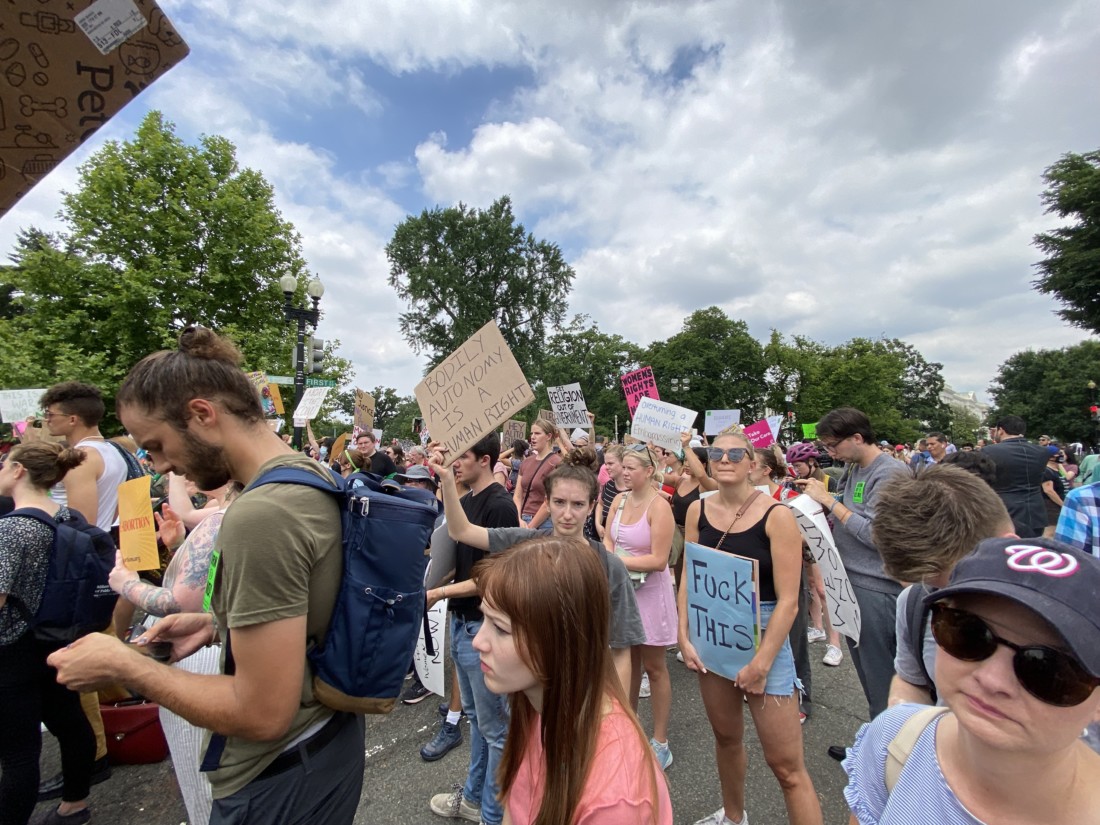 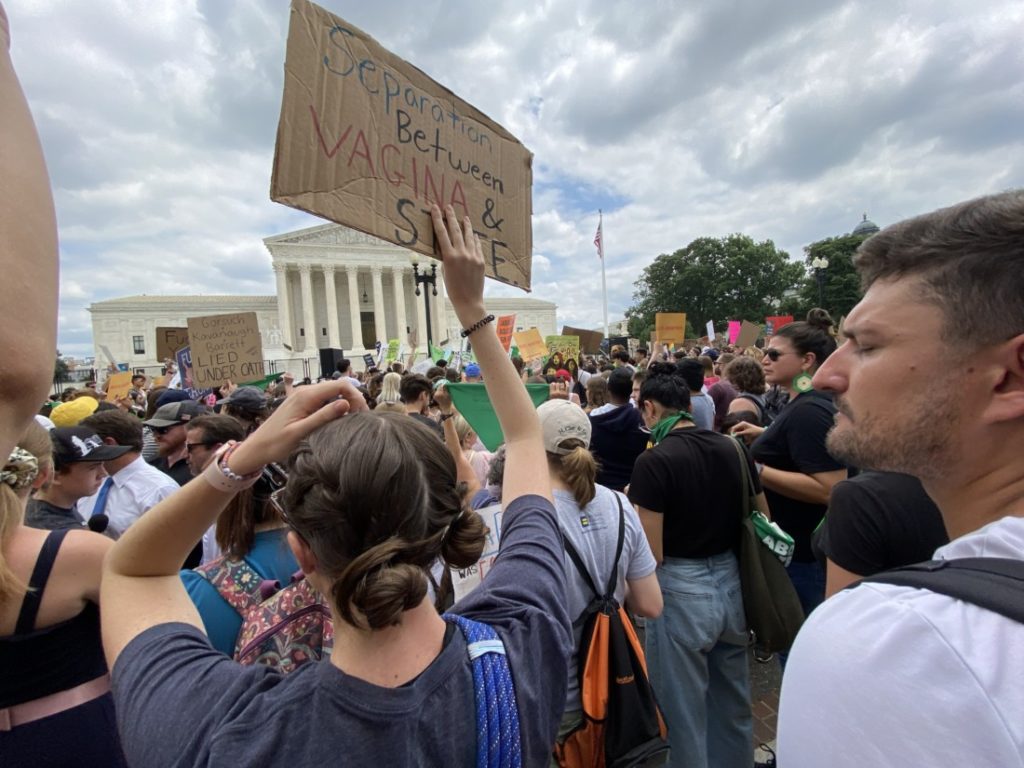 The U.S. Supreme Court overturned Roe v. Wade on June 24, ending constitutional protections for abortions which had been in place since 1973. The decision leaves abortion laws up to individual states.

Justice Samuel Alito wrote in the court’s 79-page opinion, “We hold that [Roe v. Wade] and [Planned Parenthood of Southeastern Pa. v. Casey] must be overruled. The Constitution makes no reference to abortion, and no such right is implicitly protected by any constitutional provision, including the one on which the defenders of Roe and Casey now chiefly rely—the Due Process Clause of the Fourteenth Amendment.”

He went on to state that “Roe was egregiously wrong from the start. Its reasoning was exceptionally weak, and the decision has had damaging consequences.”

The court’s 6-3 decision stems from the Dobbs v. Jackson Women’s Health Organization case in which it challenges Mississippi’s Gestational Age Act, which prohibits knowingly inducing or performing an abortion after 15 weeks of pregnancy.

“The Constitution is neutral and leaves the issue for the people and their elected repre- sentatives to resolve through the democratic process in the states or Congress—like the numerous other difficult questions of American social and economic policy that the Constitution does not address,” Kavanaugh wrote.

Justices Stephen Breyer, Sonia Sotomayor and Elena Kagan wrote the dissenting opinion, saying, “The Mississippi law at issue here bars abortions after the 15th week of pregnancy. Under the majority’s ruling, though, another State’s law could do so after 10 weeks, or five or three or one—or, again, from the moment of fertilization. States have already passed such laws, in anticipation of today’s ruling. More will follow.”

The 60-page dissenting opinion argued that the ruling would impact primarily poor women who do not have the means to pay transportation costs to another state for an abortion.

In response to the anticipated decision, as a leaked draft of the court’s majority opinion was published on May 2, California said it will partner with Washington and Oregon to committing “to defend access to reproductive health care, including abortion and contraceptives, and to protecting patients and doctors against efforts by other states to export their abortion bans to our states.”

Congressman Jimmy Panetta (D-20th District) wrote on his Facebook page: “Overturning Roe revokes the right to choose that women have relied on for 50 years. A majority of Americans support this right and are against this decision. The House passed the Women’s Health Protection Act, but now all of us must fight to make our voices heard in November.”

In a later post, he stated that he joined people protesting the decision outside the Supreme Court.

California Senator Anna Caballero (D-12th District) released this statement: “It is an alarming and sad day for our country. The United States Supreme Court has issued a ruling that takes away the fundamental rights of women and people to make their own health care decisions. The right to an abortion has been settled law for 50 years, and women’s lives have been better for it. The decision to have an abortion can be a difficult, heart-wrenching choice, and one not made lightly—but with the advice of medical personnel and trusted friends and family. The government should have no right to interfere or intervene. It is a personal, constitutional right.”

Assemblyman Robert Rivas (D-30th District) released this statement: “Today’s Supreme Court decision to overturn Roe v. Wade was appalling and offensive – and it is likely a disturbing harbinger of more rights being stripped away from millions of Americans. While this decision did not come as a surprise, it is still troubling to see the extent to which the right-wing Court will go to attack the rights of women and betray their oaths of office.”