Two men were seen fleeing from the fire scene and are suspected of attempted burglary of Babe Ruth League snack bar and then deliberately setting fire to a tool shed. Damage to nearby light may delay baseball season. 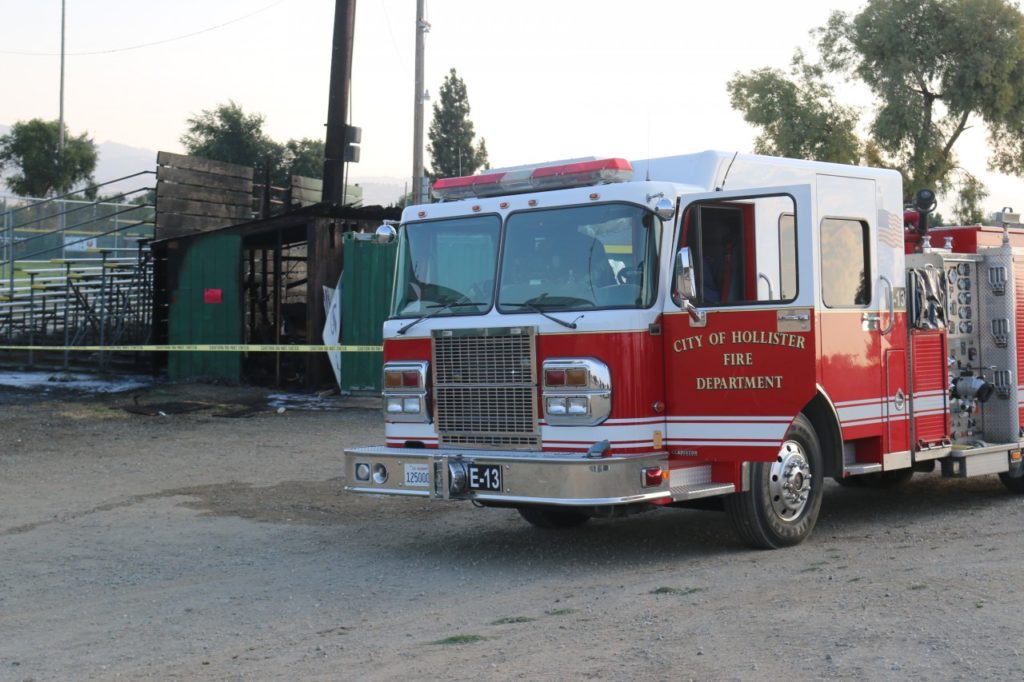 Two engines from the Hollister Fire Department responded at 4:30 p.m. Sept. 7 to a reported wild land fire at 1023 Memorial Drive at the north end of Veterans Memorial Park near Hillcrest Road, according to Division Chief Leo Alvarez, who is the city’s fire marshal.

Upon arrival, firefighters discovered the blaze was actually a structure fire. He said after a preliminary investigation it was obvious the fire was set intentionally. An eyewitness told Alvarez that he saw two men, in their 20s or 30s, jumping over the cyclone fence next to Hillcrest Road, running from the direction of the fire.

“When we arrived on the scene it was a wooden storage unit of about 10-by-20 feet and it was not a grass fire,” Alvarez said. “We had two trucks (one from each fire station) respond to it in a full-structure response because we didn’t know the actual site. When we got there, we saw what was going on so the first fire truck pretty much took care of it and the second engine pumped water to the first engine to continue flowing water.”

He said the person who called the fire approached him at the scene and told him he saw the two men jumping over the cyclone fence at approximately the same time that he noticed the fire and called the fire department. Alvarez said the man described the men and their clothing, but could not divulge the descriptions to BenitoLink because the police department has yet to begin its investigation.

“There was no way that fire could have started by accident,” Alvarez said. “As soon as the fire was out we started the investigation. We try to preserve the scene, so we don’t blast water all over the place and then we looked for evidence of arson. It looked like there was only one entrance to that shed and the fire started right at the door.”

Alvarez said there was further evidence that someone had used “construction spikes” in an attempt to break into the snack bar and he believes the same person or persons were the ones who set the fire with an accelerant. The blaze was contained within five to six minutes and the firefighters spent more than an hour of salvage and overhaul operations, he explained. They wrapped up and were back at the station at 8 p.m.

A power pole for stadium lighting was also badly charred from the fire and Alvarez called PG&E to secure the power, but PG&E informed him it was not their pole, that it was on private property and belonged to San Benito County. The department then called the county public works to inform them.

He said the park is a great place, but it needs better security.

“If they would have had cameras it would have sealed the deal,” he said. “Right now, the fire captain is still working on the investigation and he will do the full report.”

The park has been the scene of numerous vandalisms and thefts over the past 10 years.

Greg Lopez, president of the San Benito County Babe Ruth League, said that when he made it to the baseball field, he found one of the league’s equipment sheds and its contents were completely destroyed by the fire. He said the shed contained a golf cart, field maintenance equipment, fertilizers and paint, a brand new backpack leaf blower and other equipment.

“The biggest loss was our golf cart that we use to tow around the drag was completely destroyed,” he said. “The light standard also suffered major damage and it’s no longer safe. That’s a big deal because we lost our lighting that of the home plate area, which does not allow us to play evening games anymore. We’ve got to get that fixed as soon as possible and it’s going to be a big ticket item.”

Lopez said he is working with the county to determine what it will pay and what the league will be responsible for. He said most of the equipment was insured and if they’re not it will cost several thousand dollars to replace them. The shed belongs to the county, he said, and they’re looking at replacement cost. He estimated it would cost about $8,000 if made out of wood, and more if they decide to build a metal shed.

Lopez said the fall season is set to begin on Sept. 16, but the fire damage will set the season back a couple of weeks.

“We’re in the process of talking with the other leagues to see if we can borrow their fields, but I haven’t heard back from them yet,” he said. “We’re hoping to get this stuff fixed and only have to delay a few weeks. That light standard is a real issue if it cannot be fixed in a timely manner.”

Lopez said he wanted to thank the community for their donations and for volunteering to make repairs.

“They want to help get us back on our feet so we have a program for the baseball players, so I want to thank the community for their outpouring of support,” he said.