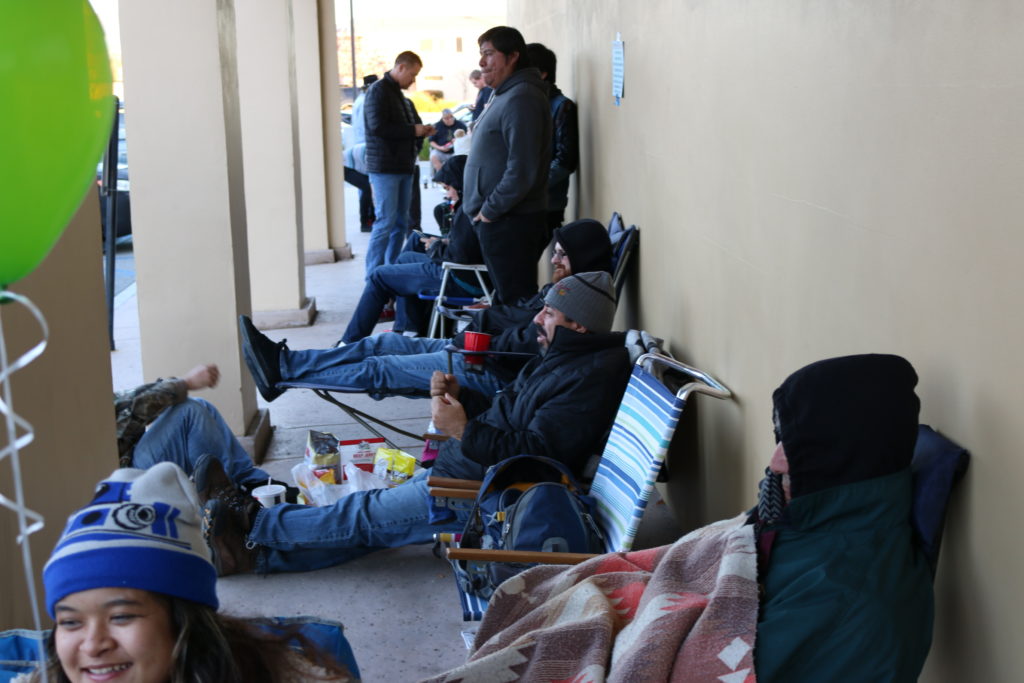 Local "Star Wars" fans may not be as crazy as those in the big city who camp out for days at a time, wear Darth Vader or Yoda costumes and spar with light sabers. But they are loyal, all the same, and everyone Benitolink talked with ahead of the movie franchise's latest blockbuster had seen every episode—many more than once. Some saw the original "Star Wars" in 1977, and some binged viewing of all six episodes in order to be all primed for the first showings of "Star Wars: The Force Awakens" at Premiere Cinemas.

So they came and took up their positions in line with heavy coats, hats and gloves, strings of balloons, and stacks and stacks of pizzas, thanks to the Domino’s Pizza right across from the theater.

If it were to be known by those who had spent much of the day waiting in line, the envy of all would have to be the guy who probably was the first in Hollister to watch it, Craig Tankersley, general manager, who is also an unabashed fan of the movie series.

He said Star Wars:The Force Awakens is not just another movie, when it comes to the business of showing movies.

“It’s something special,” he said. “Everybody here (the staff) likes it, but of course it means revenue, comparable to other blockbusters like 'Harry Potter' and 'Hunger Games.'”

He said Star Wars: The Force Awakens is scheduled to run three weeks. After Thursday night's three showings, it will be on three screens with four showings in each theater per day. While the studios and just about everyone associated with making Star Wars, or any other film, can win big financially if it is a hit, the theater owners only get a small percentage of ticket sales. The worst kept secret about the theater business is that they like blockbuster movies mainly because they fill more seats and it’s the rare moviegoer who can sit through a two-hour movie without a bucket of popcorn, candy and a soda. That’s where the real money is in the movie biz.

Business may be business, but you don’t run a theater if you’re not a fan too. In Tankersley’s case, he really liked the latest in the Star War episode. Like those outside in the cold, he has seen all of them.

“I was glad to see it come back,” he said. “I liked it a lot. I wanted to see it again right afterwards.” When asked if he had a favorite, he said he likes them all. As for how many times he plans to see this film, he said, “I’ve got quite a few kids and grandkids who want to see it, so I’ll be bringing them.”

As for those who braved the cold outside, the pole position at the head of the line was held by Ryan Thompson of Hollister, who secured his position at 4 a.m. Thursday morning, along with three of his buddies, one of whom came from Oregon to join in, to brave low temperatures. The four would take turns holding their position, while the others would leave to get warm or take a break.

Why did Thompson do it?

“I love Star Wars,” he said. “And we’re actually getting a good Star Wars movie this time instead of the prequels, which weren’t very good.”

Obviously more than a fan, Thompson is into the technical side when he explained what makes a good Star Wars.

“It takes a competent director, a good story, good special effects, blending practical and CGI,” he said. “J.J. Abrams was a good choice to take over the new trilogy. My favorite episode is 'The Empire Strikes Back.'”

Huddled together counting down to when the doors would open at 7 p.m., Alison Recio and Justin Frascone, of Hollister, were in line because it’s “the best saga ever,” said Recio.

Both had seen all six previous episodes, and were in agreement that "Return of the Jedi" was their favorite.

The Chatham family, of Hollister, had been in line a couple of hours primarily because of the number one fan, the dad, Andy, who saw his first in 1977.

Daniel Toledo, from Hollister, said, “I’m a big Star Wars fan and it’s the best movie ever. I started watching them in the 90s with my older brother.” As far as what he thinks makes Star Wars films special, he said, “The Force. I like how a Jedi can use the force to play tricks on people. And the light sabers are great too.”

Toledo said he’s into the films to the point where he’s bought many of the collectibles and clothing.

“I’ve bought some of the light saber toys and I’m wearing one of the T-shirts now,” he said.

Jessica Cortes was munching on a slice of pizza as she waited line. She had been there since 1 p.m., waiting for the 10:15 p.m. showing.

“I grew up with Star Wars and they’re awesome,” she said. “I love the Jedi Knights and the Force.”

Star Wars: The Force Awakens is rated PG-13 and is 2 hours 25 minutes long.