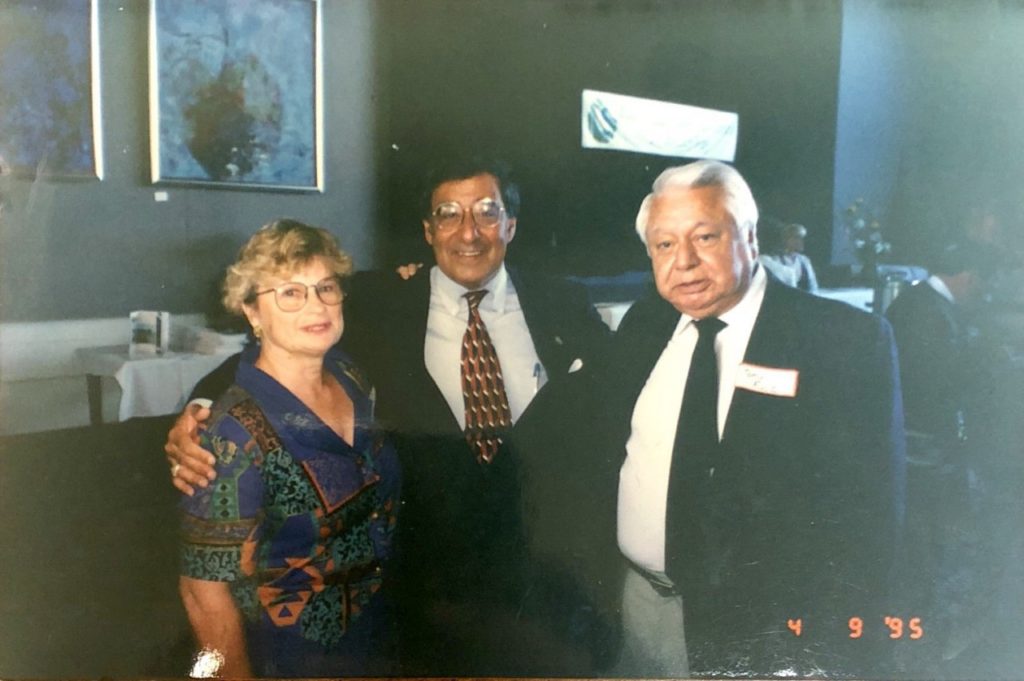 Tony Ruiz was different things to different people—a beloved husband and family man, dedicated teacher, political mover and shaker and mentor—but to those who knew the Hollister native who passed away Feb. 8, all could agree, Ruiz was committed to the people of San Benito County.

“Tony was a dedicated person who believed in all aspects of the community and that it should be designed for the betterment of the residents,” said Gordon Machado, a longtime friend who first met Ruiz playing football and baseball on the streets of Hollister during their early school days. “He was a success story and we are sad to see him leave.”

Like many people who choose to live and work in the town they grew up in, Machado’s relationship with Ruiz would develop over the years, broadening their playing field from the streets of Hollister to the chambers of political power.

Both became involved in serving the local community. Machado served on the Hollister City Council for 12 years while Ruiz built his career as an educator, working first at Madera High School for five years, then returning to Hollister where he worked for more than 25 years at Gavilan College as a Spanish and Southwest Studies professor. Ruiz also sat on the San Benito High School Board of Trustees and governing board of Gavilan College.

Ruiz and Machado held different political views. Ruiz was a staunch Democrat who would later serve as mentor to people rising in the ranks of the regional Democratic party. Though Machado is more Republican-leaning, the two came together and formed an independent group called the New Urbanism Committee, which met bi-weekly to discuss the relevant issues of the day and promote various positions they felt were in the community’s best interest, from road safety to political inclusivity.

“We pushed for the mayorship to be an elected official, whereas before, it was an appointed position,” said Machado. “We were also very instrumental in the courthouse being located downtown at the former location of Fremont school.”

Ruiz, impacted by the death of a student near the Gavilan College campus in Gilroy, advocated for an overpass at Highway 25 and Highway 101, said Machado, a temporary measure that remains to this day, more than 20 years later.

“Tony did a lot of research and was very forceful in expressing his opinion and how he believed things should be,” said Tom Breen, a retired San Benito County Superior Court judge who served with Ruiz on the Gavilan College Board of Trustees.

Ruiz did not always agree with the board’s majority opinion and would get upset, Breen said, when he felt members were just rubber-stamping positions.

Breen continued: “He was willing to duke it out with anyone on any issue and to give advice to those who ran for public office. He was pretty much an open book. He was fearless and that was his charm, too. His major contribution was his teaching of students for decades. He did a good job and everybody knows it.”

Laura Perry was one of those students. She was already married, had a family and owned a home when she decided in 1983 to enroll at Gavilan College to learn Spanish. There, she would meet Ruiz and begin a friendship that would last decades.

“I had him for Spanish for two years,” began Perry. “He was great. As an older student I not just wanted an education but wanted a new language and thought it would be fun to learn.”

Perry also took part in one of Ruiz’s month-long educational trips to Zacatecas, Mexico, a program he spearheaded for students who wanted to immerse themselves in the culture and language of our southern neighbor.

“He said I was losing my language and my Spanish was terrible,” said Perry with a tone of amusement. By that time she had moved from Gavilan to San Jose State where she took Spanish as a minor. Law school in Santa Clara followed.

Perry said the trip to Mexico was “phenomenal” and she will always remember Ruiz as the person who gave her the gift of Spanish.

“I use my Spanish to impress locals all the time, and when I do, I thank Tony Ruiz—and that is from my heart,” she said.

Perry also got to know Ruiz as a fellow trustee on the Gavilan board. They served together during the contentious time when the college was deciding on the best location for a campus in San Benito County.

Calling Ruiz a “frenemy,” the pair was on opposing sides of the issue. Ruiz believed the college should be centrally located, ideally in downtown Hollister, where it would be accessible to the most people. Perry preferred the Fairview Corners location near Ridgemark, which won the day.

“It was a challenging but very fun and endearing relationship for 35 years,” said Perry. “Tony and I were on opposite ends of the political spectrum. He was my nemesis and I'm sure I was his. Everybody wanted different things and he fought for what he wanted, and that is what people do.”

Machado said the college’s decision to purchase the Fairview Corners site was very upsetting to Ruiz. The site remains vacant, even though residents passed the $110 million Measure E bond in 2004 to acquire it. (The bond also funded other projects.)

“Tony believed the college should be located in the core of the community to make it more accessible to the community,” said Machado. “He fought the board, and Tony did his homework, but they didn’t really care what he said. He was a dedicated person.”

Ruiz was the first person in his family to graduate from college, according to his widow, Kathy Ruiz. The lifelong student advocate believed in the transformative power of education. After graduating from San Benito High School (then called Hollister High), Ruiz attended Gavilan College (then called San Benito Junior College) and Fresno State. He also spent a summer at Columbia University in New York studying linguistics.

A family man, Ruiz was one of eight children born to Gregorio and Antonia Ruiz. His sole remaining sister, Josephine Aguirre, is 90 years old and lives in Los Angeles.

“He was very fond of his sisters who worked in the [San Benito Foods] cannery, which allowed people to become middle class,” said Kathy Ruiz, who first met her husband as a student but began their courtship much later when she became a dean at Gavilan College. “He wanted kids to go on and experience life.”

“He believed that you could change your life by getting an education,” she continued. “He wanted education and travel. He didn’t buy a pick-up, he would just go travel.”

During his travels, she said her husband would look at what other towns were doing and think about what could be implemented in San Benito County.

“He was always thinking about how to change things and who could do it—then he would bug them. That was his modus operandi.”