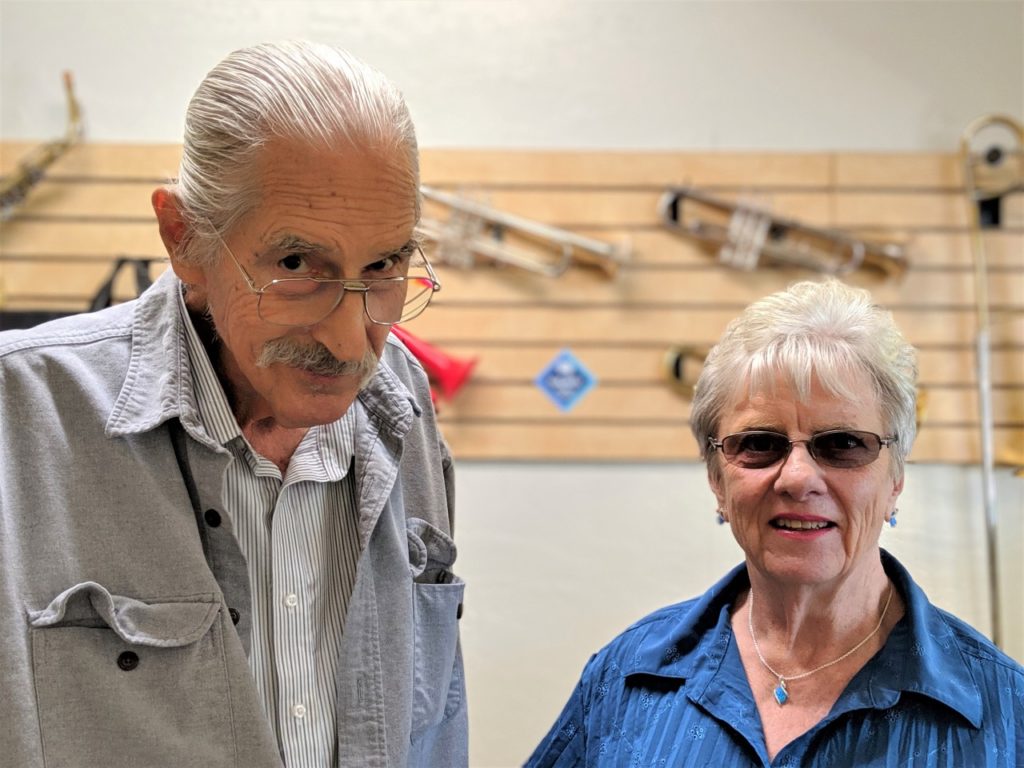 When Joe Ostenson came to Hollister in 1965 to teach music, he believed he would stay one year before moving on. Fast forward to 2019 and after a 45-year career with the Hollister School District, Mr. O as people fondly call him, is still teaching music.

Asked what kept Ostenson in Hollister all those years, he said it was meeting his wife Frances, a lifelong Hollister resident.

Ostenson talked about seeing her for the first time. They met at a teacher bowling event in town when Frances came as a guest of her friend, a fellow teacher.

“I met a young lady in the fall of 1965,” Ostenson said. “I saw this young lady there and asked her if she wanted a coke after bowling.”

After their wedding, Ostenson stayed in Hollister not only for his passion of teaching music and love of his wife, but also as he jokingly said, “Her mother was a good cook.”

Ostenson recalled an experience with another student while attending San Jose State University.

Ostenson uses examples such as this to express how music is “the universal language of mankind.”

“Music is for everybody,” he said. “It crosses the line of nationalities. It doesn’t matter if you’re male or female.”

Reflecting on his career in education, Ostenson said he felt proud that within his classroom, his students found a place of belonging and safety in the ever-changing landscape of adolescence.

“I remember the beginning of people talking about kids being bullied,” he said. “My last few years of teaching I would leave my door open at Rancho and kids would come in and eat lunch. I came to find out some of those kids were the same ones who were picked on, but they had a safe space in Mr. O’s room.”

Ostenson said the relationships he built with students over the years still affects him today.

“One of the joys of a teacher is the older you get, people start to come up to you and say ‘You may not remember me but I had you in class,’” Ostenson said.

One time, a former student called out to him at Disneyland.

In 2010 Ostenson retired from teaching in the Hollister School District. He said it was around this time that the district considered cutting the music program and the Save the Music campaign began.

Alongside community members who felt passionate about preserving music in schools, Ostenson went to school board meetings to speak about why music was important for students’ development and learning.

This push let the school board know that they were not going to go away until the music program was secured.

Ostenson explained how Save the Music’s success showed the importance of fighting for what one believes in through the appropriate means and channels.

“If you have something you want changed, present the materials. Go to the board,” he said.

Today, Ostenson still teaches music at Mr. O’s Academy of the Arts, a nonprofit focused on dedicated to music in San Benito County. Formed in 2012, The academy is located in downtown Hollister.

“My goal is that people, whether they are 10 or 70, participate in music,” Ostenson said.

He said community support and some grants have kept the academy going. Moving forward, he would like to create more opportunities for seniors to get involved in music.

He’s working on an idea of creating an afternoon or evening where people would be able to come and enjoy some live music.

The next step is finding a way to bring seniors to Mr. O’s academy for a performance.

More information on Mr. O’s Academy of the Arts is on the organization’s website. Ostenson’s Jazz Band will be performing at the Hollister Farmers’ Market on June 12.