Wild or commercially cultivated, the spores are everywhere. 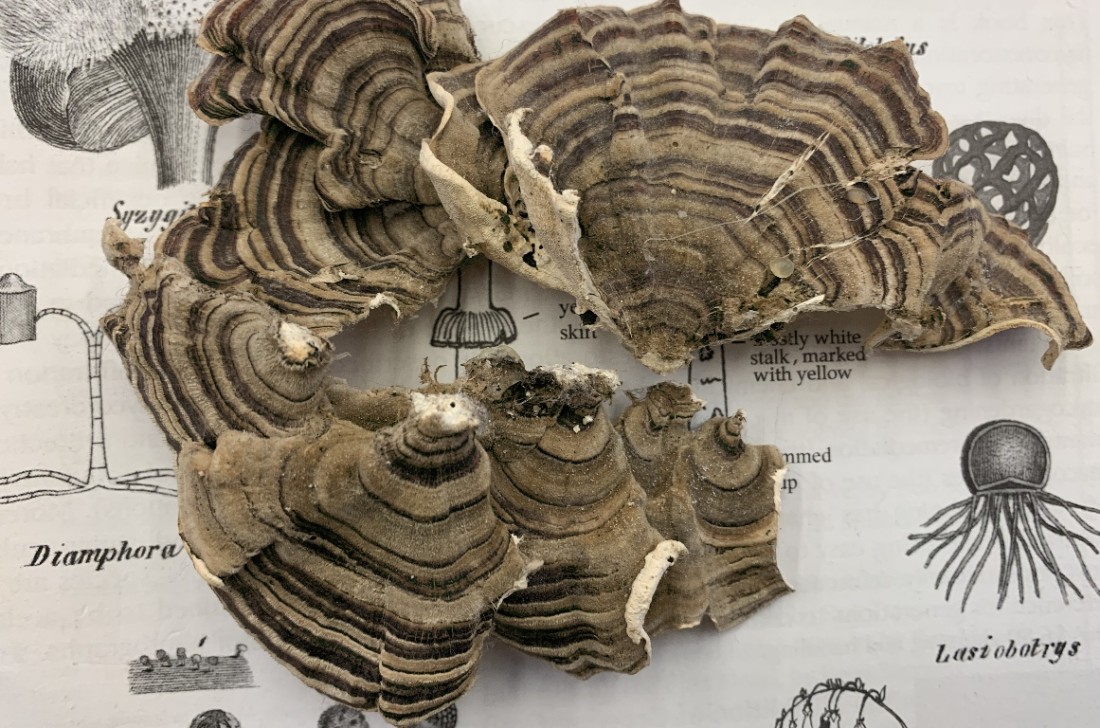 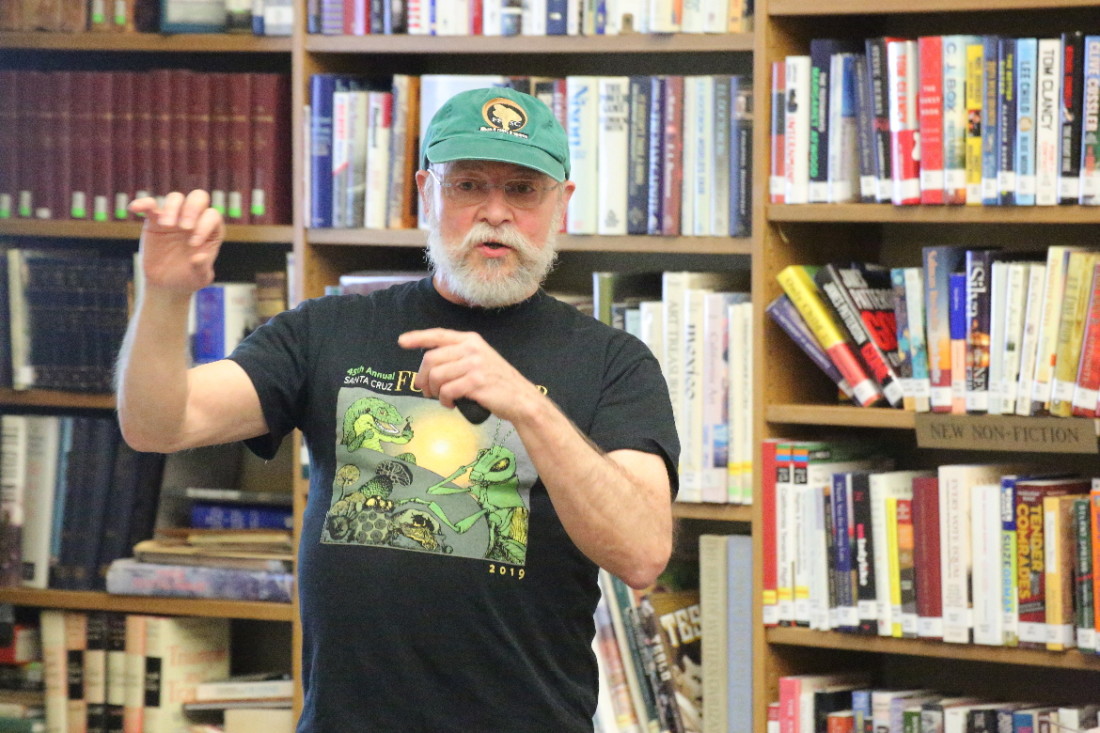 Ron Bader giving a presentation on mushrooms and fungi at the Carl M. Luck Memorial Libary in San Juan Bautista in February. 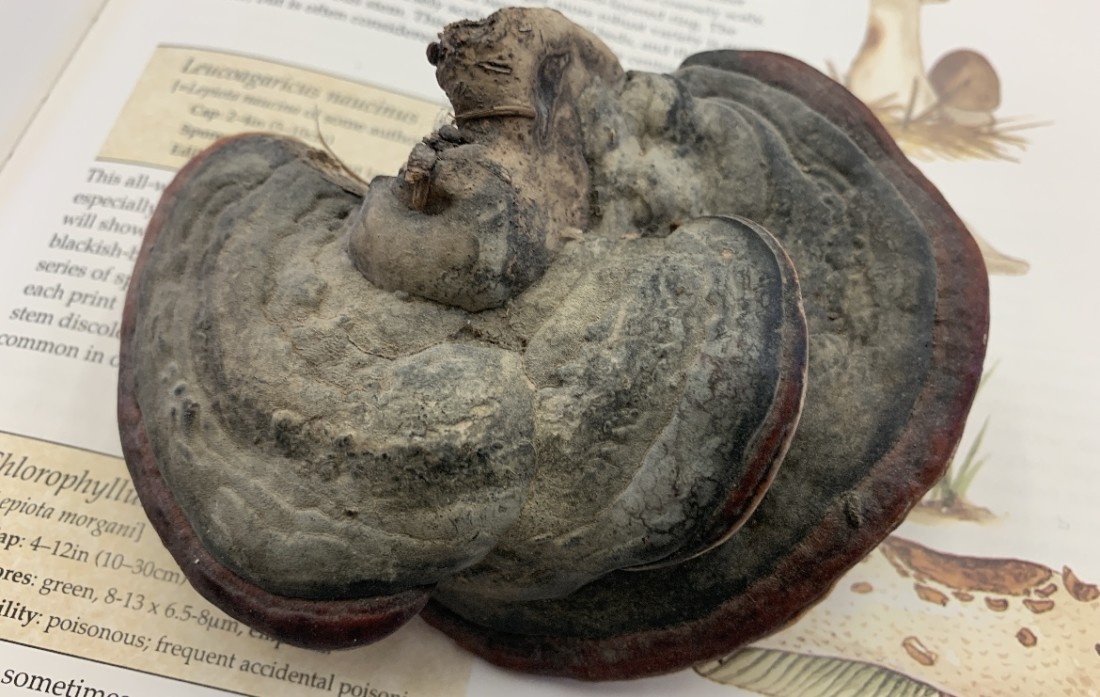 It’s the largest living thing on the planet. It killed Babar the Elephant’s predecessor as king. It tastes delicious on pizza. Watch out—fungi and mushrooms are everywhere!

“Fungi are one of the six kingdoms of life on earth and there are 2,000 species in California alone,” said Ron Bader, a docent at Big Basin Redwood Park and member of the Fungus Federation of Santa Cruz. “Fungi are all around us but hidden. It hides in dark areas, inside decayed vegetation or animals, under leaves, and buried underground.”

Bader spoke Feb. 28 at the Carl M. Luck Memorial Library in San Juan Bautista for a presentation on the “Wonderful World of Fungi.”
That largest living thing on the planet? In Malheur National Forest in Oregon, there is a Honey Mushroom fungus that extends 2,385 acres and weighs an estimated 440 tons. The newer extension of the fungus started 1,920 years ago, but the oldest parts date back 8,650 years.  Known as the Humongous Fungus, it grows up to three feet a year and little of it is easily visible.

Giant fungus patches are just the beginning. Bader used the apple tree as an example of how mushrooms are related to fungus.

According to Bader, a large mushroom can produce 1 billion to 1.5 billion spores a day over four or five days. Spores slowly develop inside a mushroom until just a thin skin is between the spores and the outside world. The release can be triggered by wind, passing animals—even raindrops can break through and send spores flying.

“Do you know what that fresh smell after a rainstorm is?” Bader said. “You are smelling all the spores the rain released.”

Unlike apple seeds, it takes two compatible spores to create a new fungus growth. Each spore contains only half of the required genetic code, and needs to find a spore containing the missing pieces of code. Unlike male-female cells, a single mushroom can release multiple versions of spores with only part of the code.

Spores become important during a critical process: mushroom gathering. Bader stressed that identifying mushrooms as safe is not an easy task, even for those with an experienced eye such as himself. For Bader, the process of identifying a mushroom begins by checking the specimen using “Mushrooms Demystified” by David Arora, a 1,000-plus-page book of indexed information on various mushrooms.

Once he has identified a mushroom to his satisfaction with that book, Bader will check the specimen against another reference such as “Mushrooms of the Redwood Coast” by Noah Siegel and Christian Schwarz, or “Mushrooms of the Pacific Northwest” by Steve Trudell and Joe Ammirati.

Bader stressed that even experts can fail to identify mushrooms accurately, adding that wild mushrooms should never be eaten until their safety is confirmed. Safely identifying a mushroom might take referencing as many as six different books.

Certain mushrooms, like the Death Cap (Amanita Phalloides), can be mistaken for edible mushrooms at various points in their growth. Upon eating a deadly poison mushroom, a person might have symptoms such as rapid heartbeat (tachycardia) or shortness of breath.  Symptoms may not show up for several days, and by the time they do, serious internal damage to the liver or kidneys might have already occurred.

Commercially grown mushrooms are much safer to consume. Unlike wild mushrooms, cultivated mushrooms are raised in sterilized organic matter and in isolation to be sure no unknown spores are present. The mushrooms people eat are mostly the “saprophytic” varieties: oyster, shiitake, cremini, and morels.

Growing these mushrooms at home is fast and easy. Bader outlined a method using a simple mix of kitty litter (made from recycled newspaper) and hamster food which, when mixed with commercially available spores, can produce mushrooms in a short time. The key is in the mix: the kitty litter and hamster food are both heated to the point of sterilization in their processing, killing any stray spores from other types of mushrooms.

One outlet for home growers is Amycel/Spawn Mate, a worldwide source of spores for popular varieties of mushroom including oyster, crimini, shitake, and white button mushrooms. The company’s production facility covering the Western United States is located in San Juan Bautista.

The process begins with millet and other raw materials heated to a high enough temperature to sterilize them.

“We cook the mixture at 265 degrees for about an hour and 12 minutes in batches large enough to produce 2,880 pounds of product,” said Plant Manager Lupe Banuelos. “It is then cooled down, inoculated with spores, and packed into 20-pound bags.”

Spores come from one of several “mother cultures” which are carefully protected, continuously growing fungus communities, one for each type of mushroom Amycel produces. Newly bagged spores grow in rooms just cold enough to allow them to start to grow. They will stay in these rooms for roughly two weeks until the spores have had a chance to establish themselves. As soon as the bags show delicate white filaments indicating healthy growth, they are moved to rooms that are considerably colder. Storing them at below 32 degrees stops growth and allows the spores to be shipped around the world.

“The biggest seller in China is the white button mushroom,” said Banuelos, “but around the world, the biggest are the portobellos and the criminis.”

People interested in growing mushrooms at home can contact the Amycel sales office to purchase a wide variety of spores for about $25 a bag.

Like Bader, Banuelos emphasized that spores are indeed everywhere. The home grower must maintain the same caution as professional growers, making sure the space they plan to use for cultivation is sterile, to keep from having any cross-contamination with potentially lethal mushrooms.

“Sanitation is very important,” said Banuelos. “Everything must be as clean as possible because there are millions of spores everywhere. They stick to everything and will reproduce.” 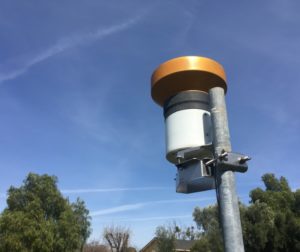