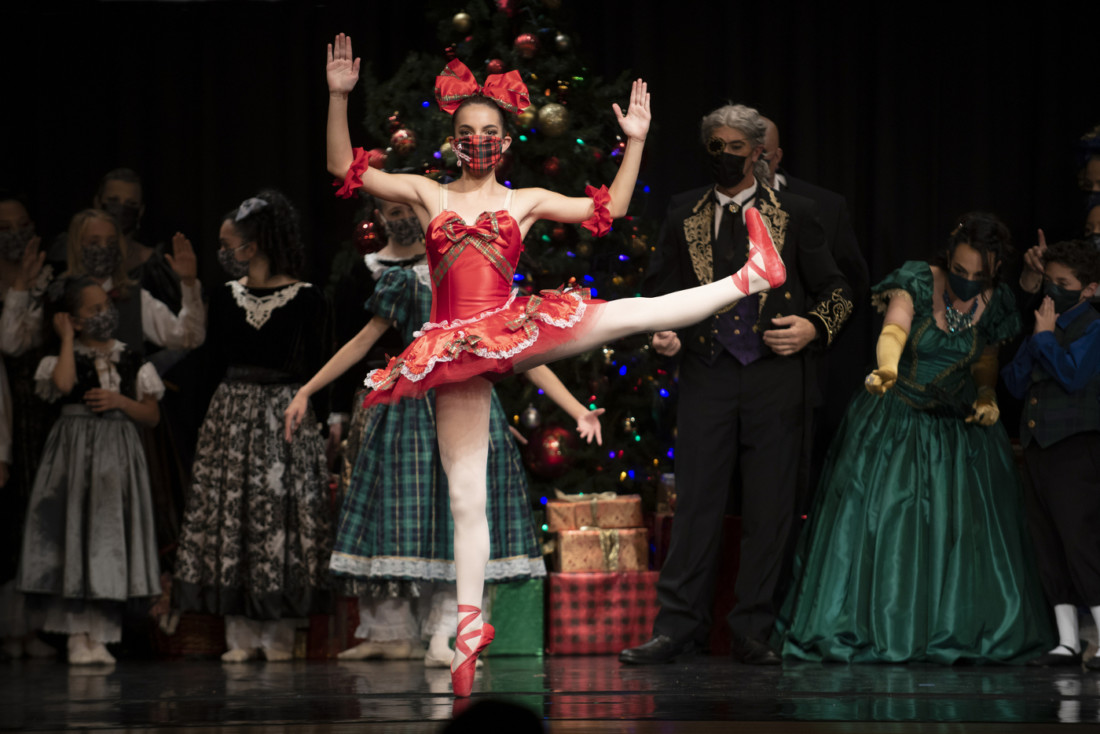 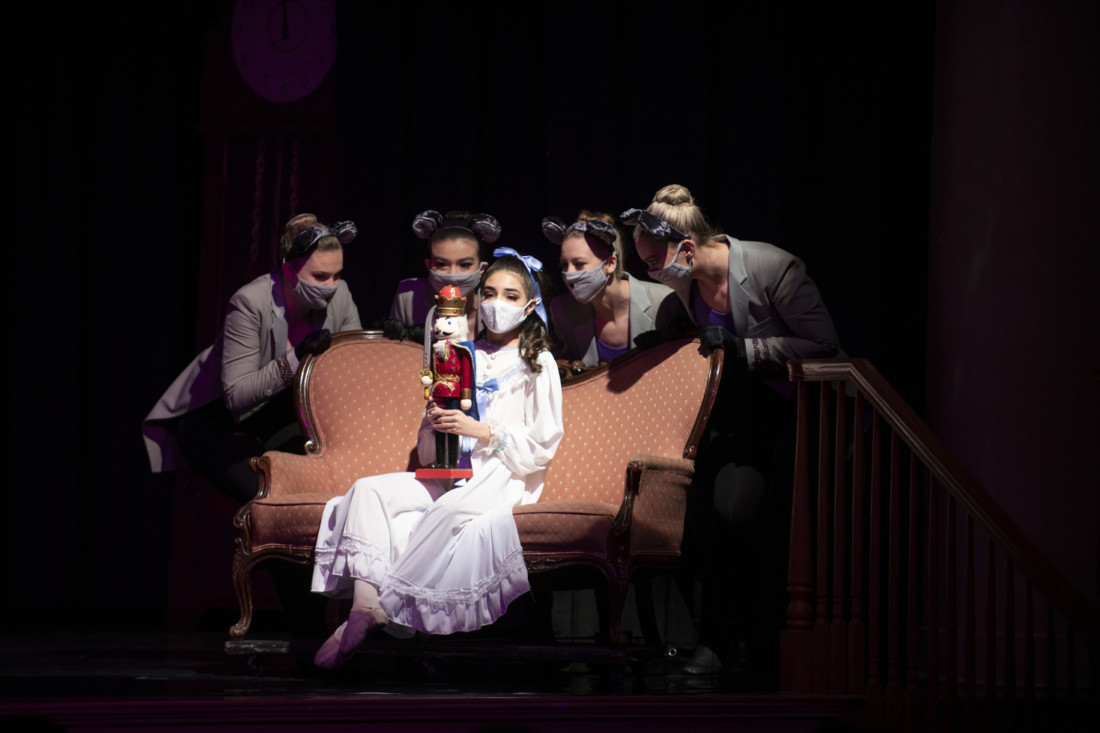 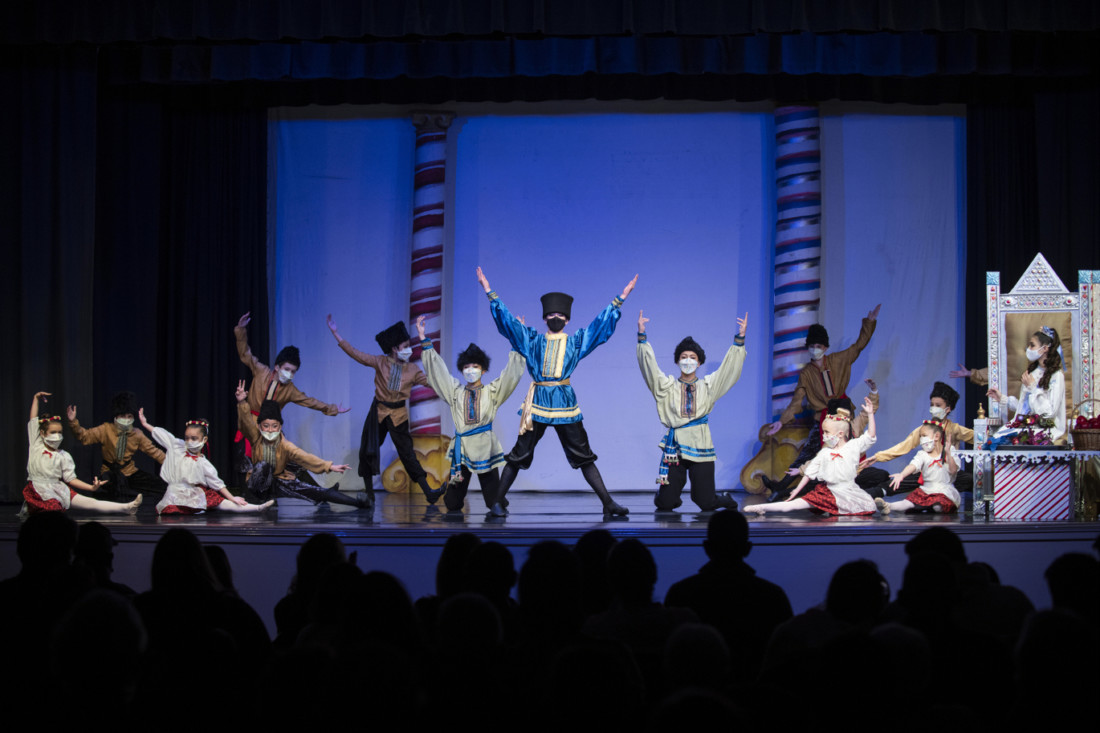 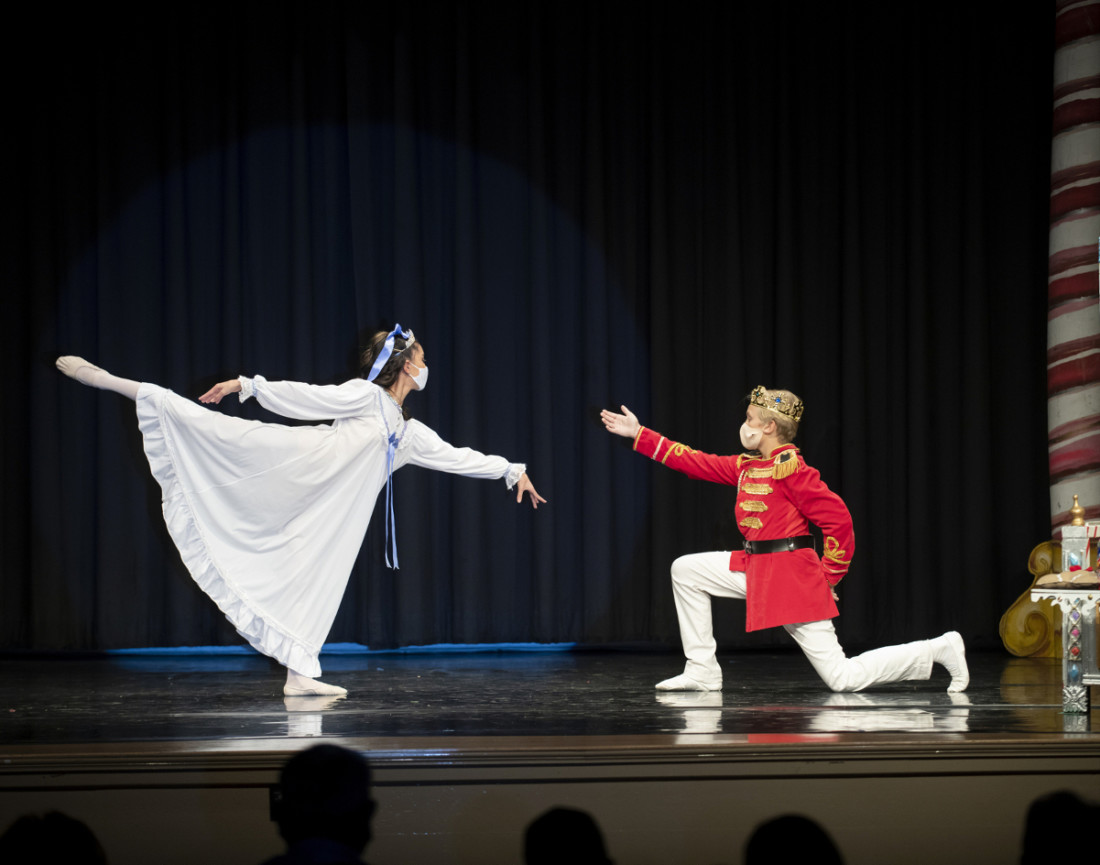 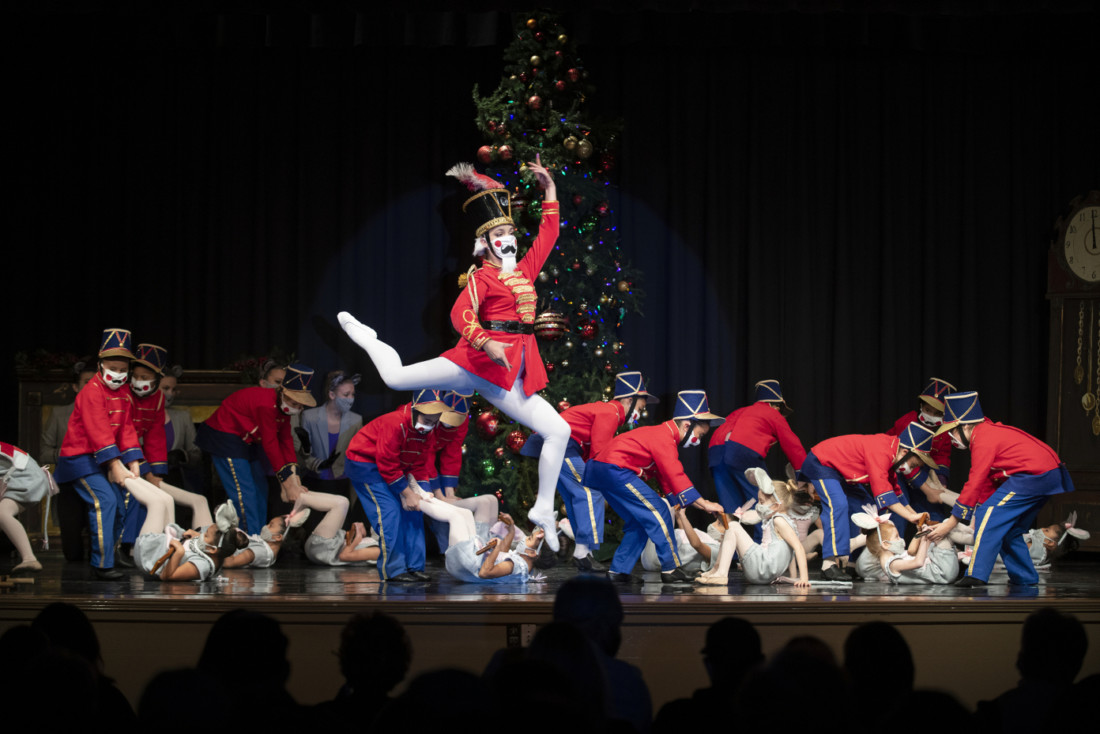 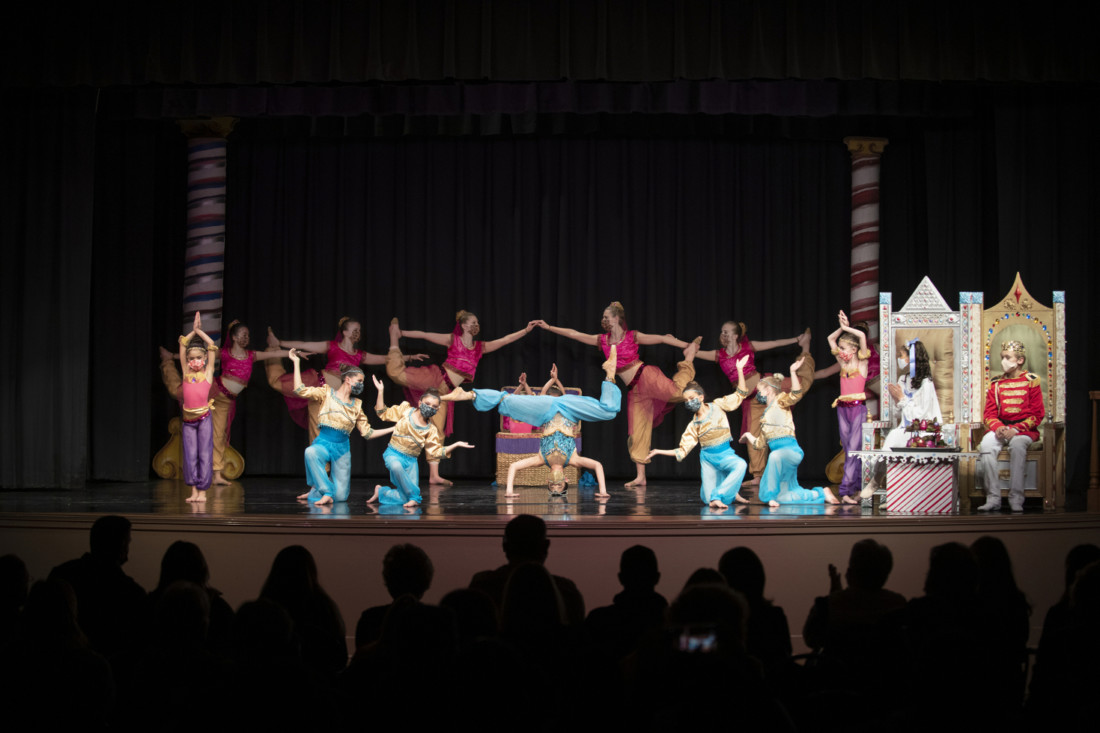 The first in-town production brings ballet back to Hollister. 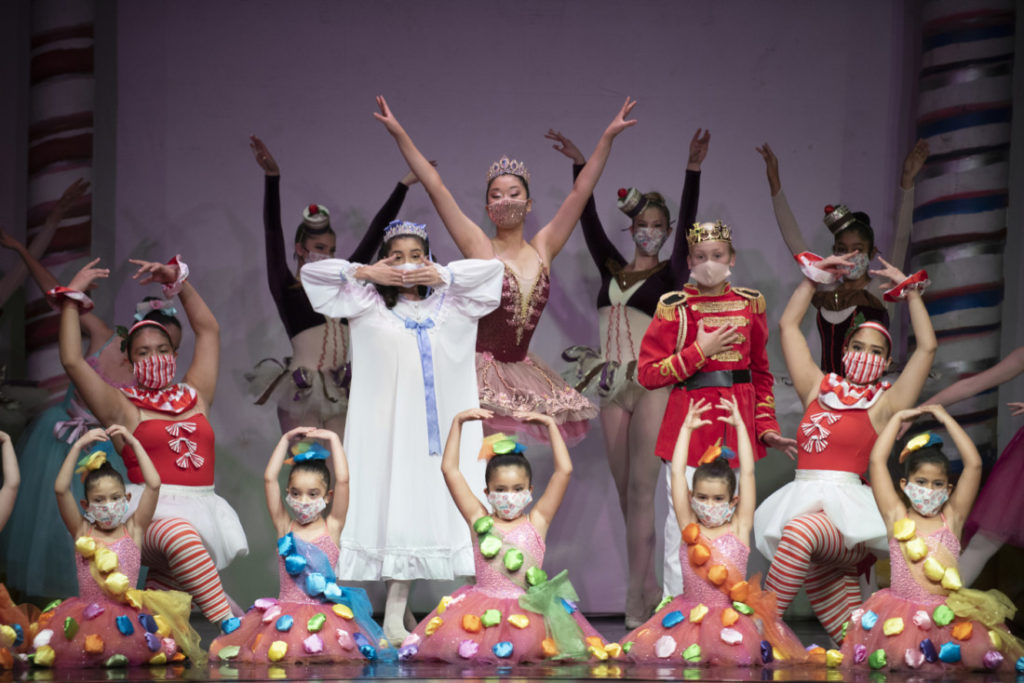 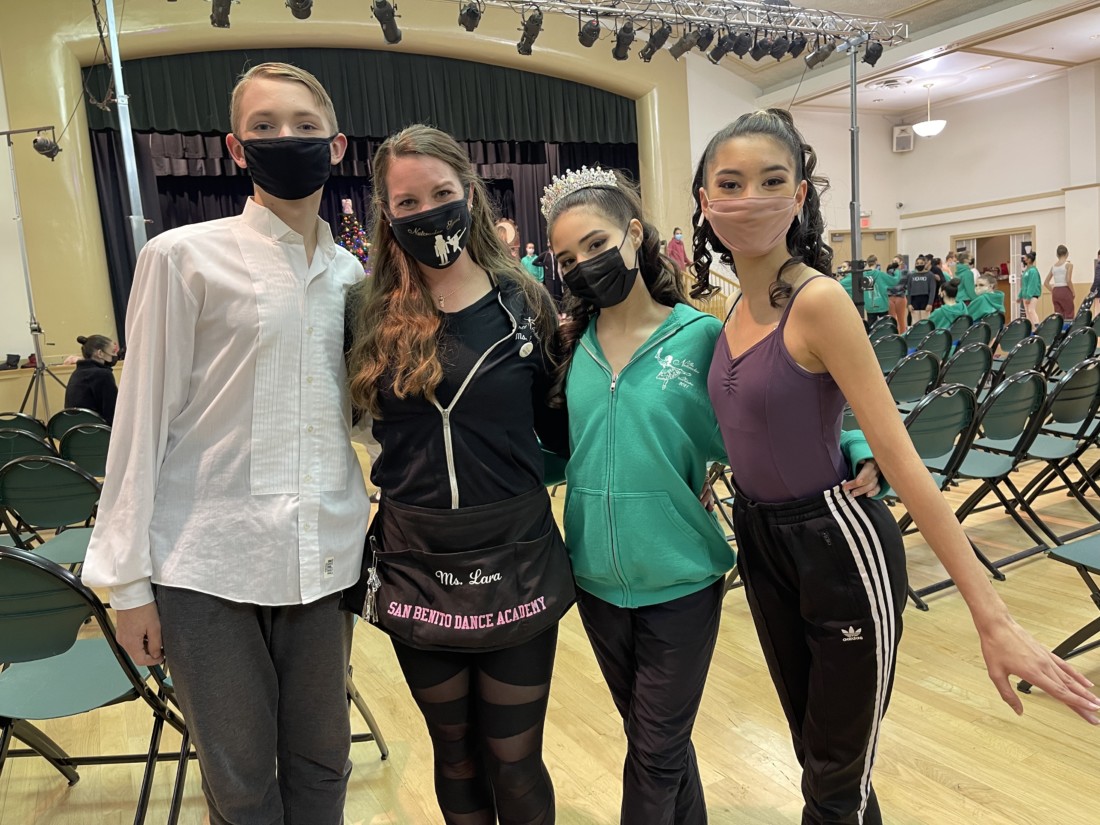 Live ballet performed by the San Benito Dance Academy (SBDA) returned to Hollister with a spectacular production of “The Nutcracker” at the Veterans Memorial Building. A company of over 150 cast members rotated roles throughout four performances, each featuring 100 academy members, ranging in age from 2 to 80, playing 550 parts.

As a recording by the Kirov Orchestra of Pyotr Ilyich Tchaikovsky’s beloved score played, the dancers took to the stage in vivid costumes. Face masks worn by all performers were the only sign of the pandemic that is still restricting a normal show.

“It’s not an option to not have a production,” said Lara King, owner and director of SBDA. “And we have had to reinvent ourselves over and over again because of COVID. Last year we filmed our ‘Nutcracker’ production over 13 weekends and did a drive-in version. This year we organized cohorts, and the scheduling was intense.”

Being unable to use Sherwood Hall in Salinas, where they usually perform the ballet, created problems for the production.

“We could not use that stage because they did not have enough staff members available for us,” King said. “Without lights and tech and sound, you can’t have a show. We were graciously granted the use of the Veterans Memorial Building, which has been a treat because we don’t have to drive out to another county. But it was a huge challenge because we had to downscale our production to fit a stage which is a fraction of the size we usually have.”

Performing in Hollister rather than Salinas for the first time in recent memory turned out to be a revelation for some of the audience members who had never seen the academy perform.

“I have had a number of people come to me after the shows and say, ‘I never knew that kind of talent existed in Hollister,’” she said. “We have it here. We are cultivating it. We are encouraging it. We are sharing it. This is our hometown and I would love to keep doing the shows here every year. We just need a venue.”

Dressing room space was a major issue, as the large cast needed to do multiple costume changes during the show.

“It has been very challenging, particularly because the backstage area is not continuous,” she said.

While most of the cast are teens or younger, King still has veteran performers who, while just in their teens, have years of experience she can rely on.

Annina Zanella, 14, and Alyssa Gonzalez, 13, split the lead role of Clara, the young girl who falls asleep dreaming about her nutcracker becoming a prince, which leads to the ballet’s various dances.

Gonzalez has been with the academy for eight years, joining after seeing her sister performing with the company.

“It is really exciting to be a part of this show,” she said. “I have been part of the dance community for a long time and getting to play the main part means a lot to me, particularly because of all the hard work we have put into this. It is a way for me to show what I have learned over the years and express myself through the dance.”

Zanella began as a gymnast and discovered dance through the academy.

“I like how much creativity and how many styles you can put into your dancing,” she said. “This production is fun because you get to connect with the little ones who see you as Clara and are a little awestruck. And I love the pretty costumes and being onstage to see all the dances. It is amazing.”

Maxwell Westphal, 15, is one of the few males in the production, but has been with the Academy for 12 years. In this production, one of his roles is that of  Matador in the Spanish Country Dance. It’s his favorite of all the ones he has had so far.

“The choreography is really good,” he said. “It’s exciting with lots of big movements that really show off your skills. All of the choreographers at the academy have really great ideas and all of our dancers are really wonderful. It has been really fun to watch everyone’s skills and passions come together.”