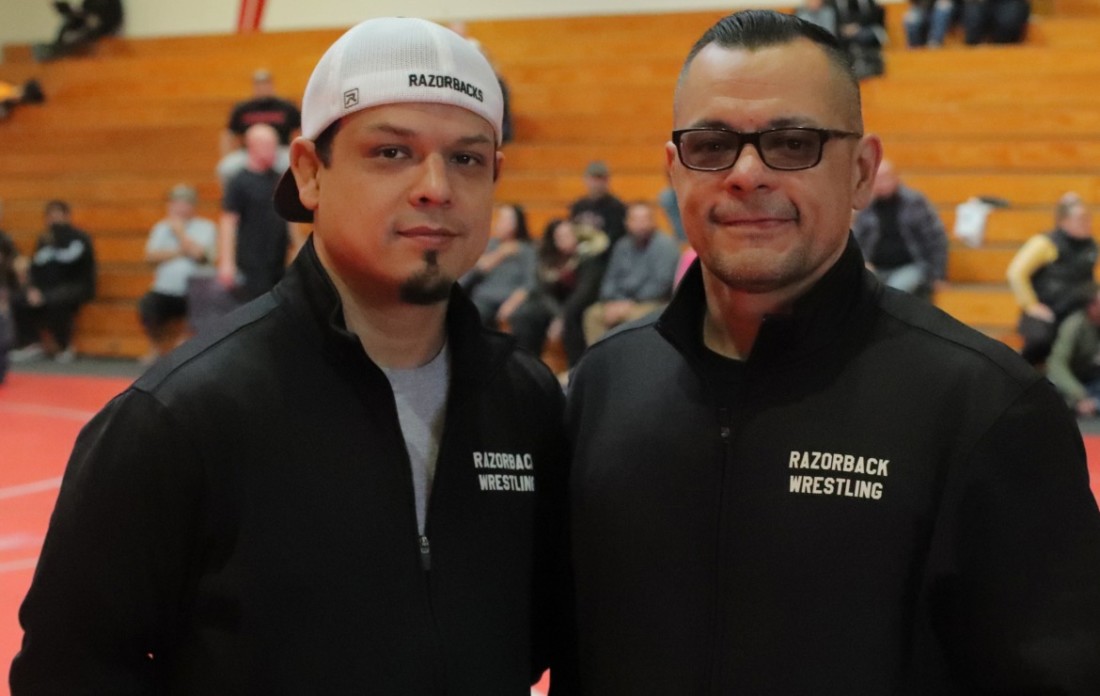 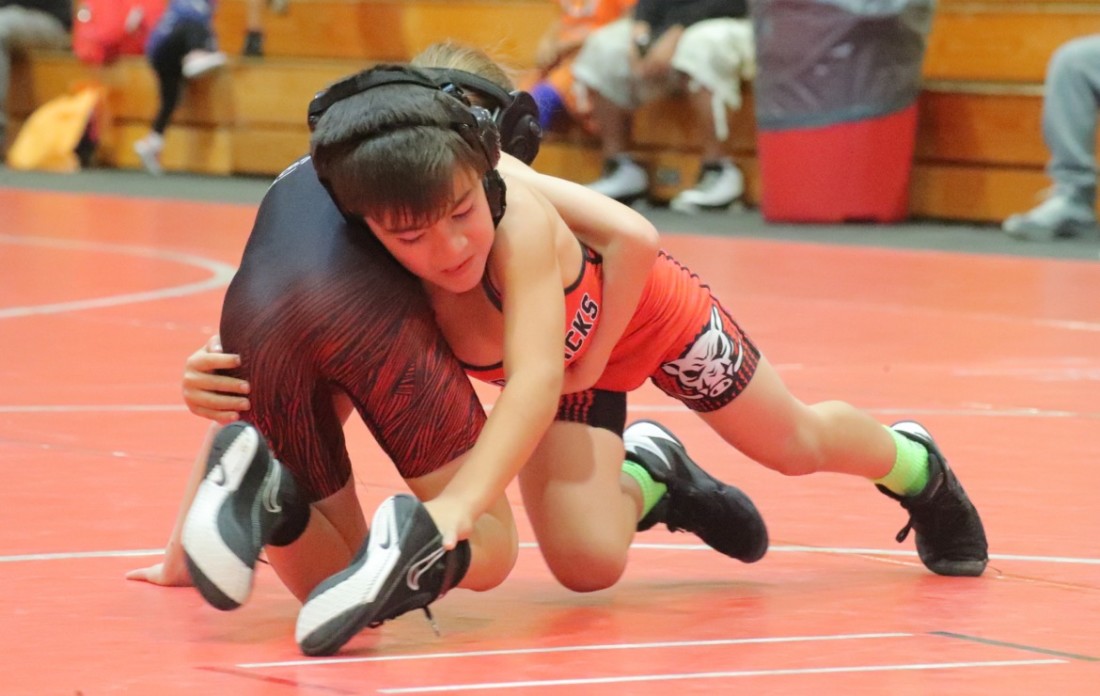 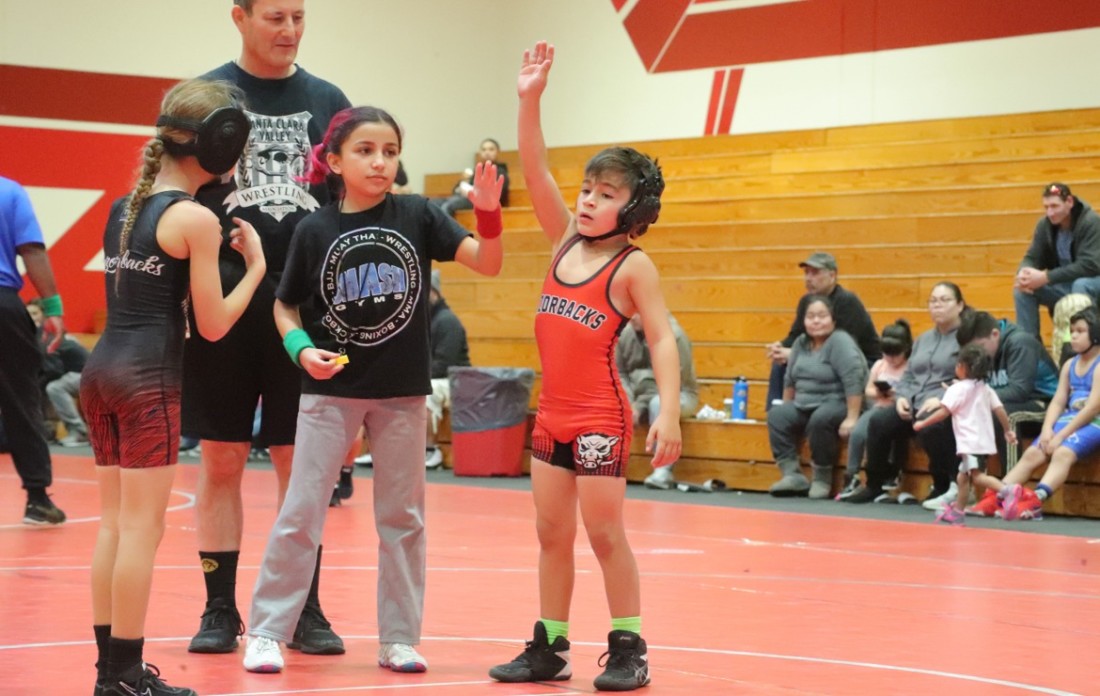 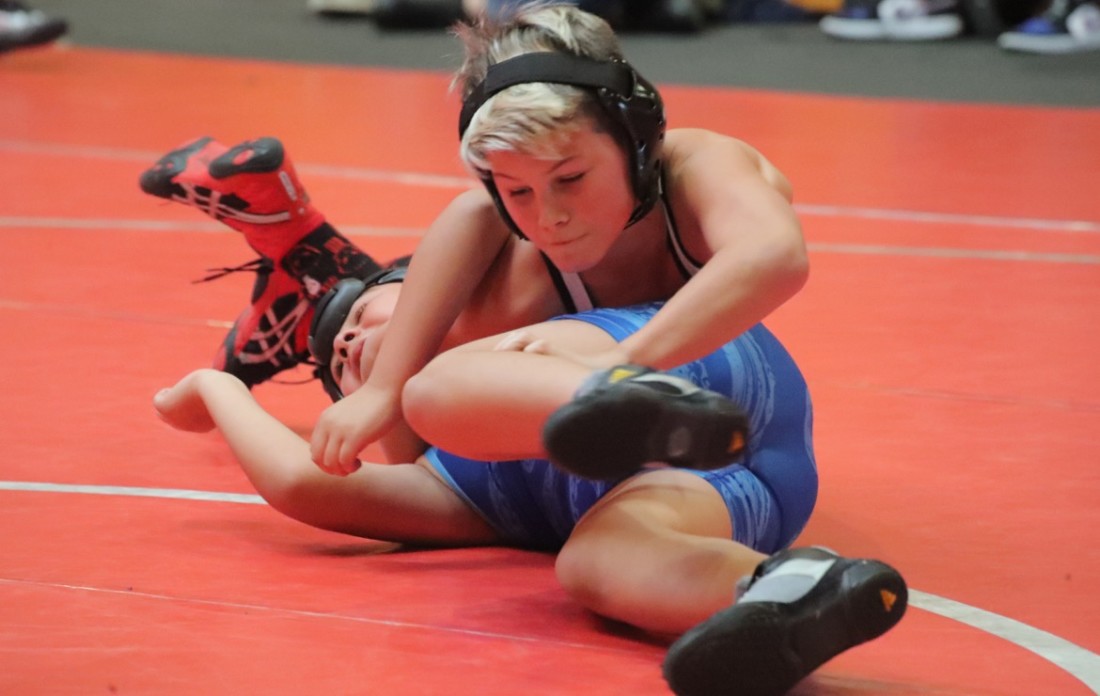 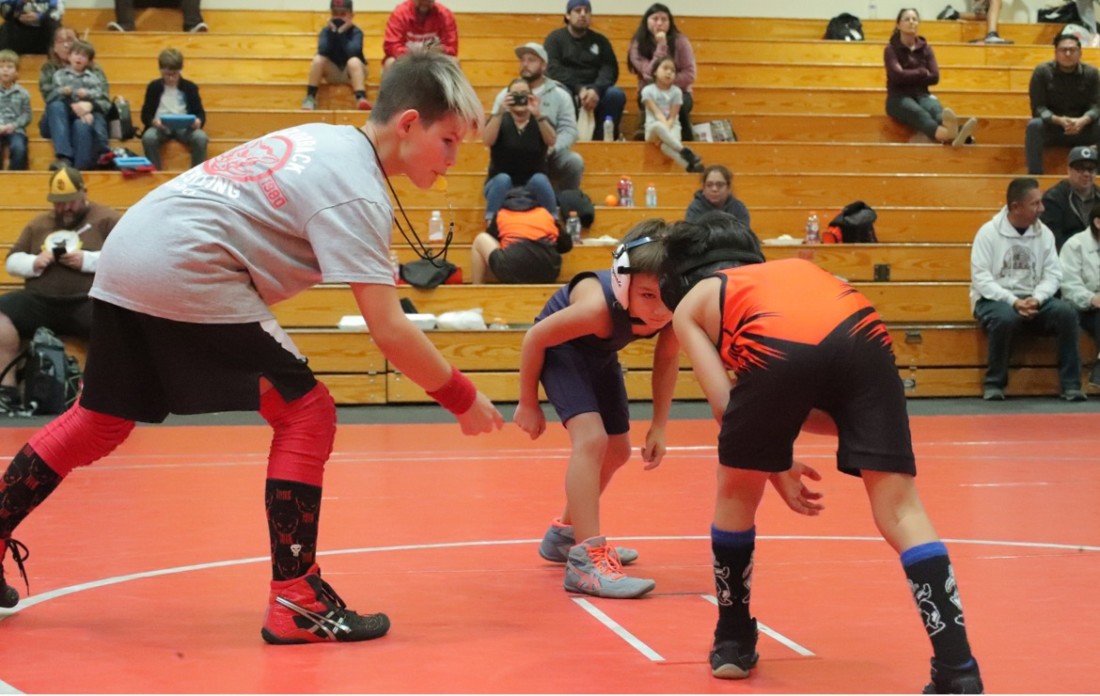 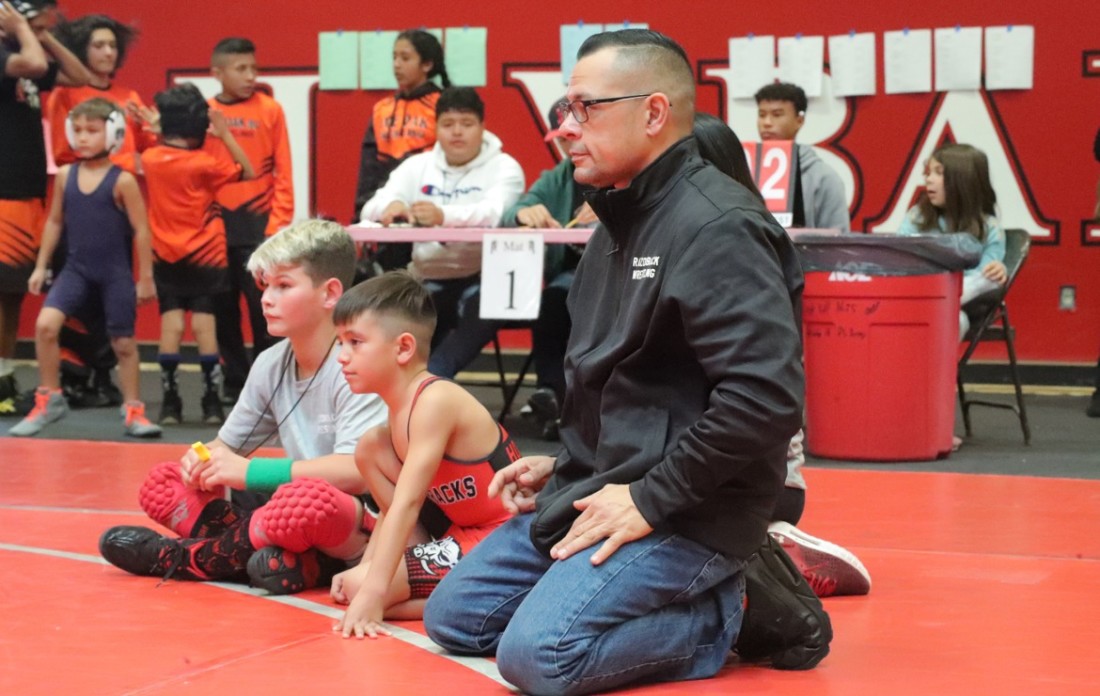 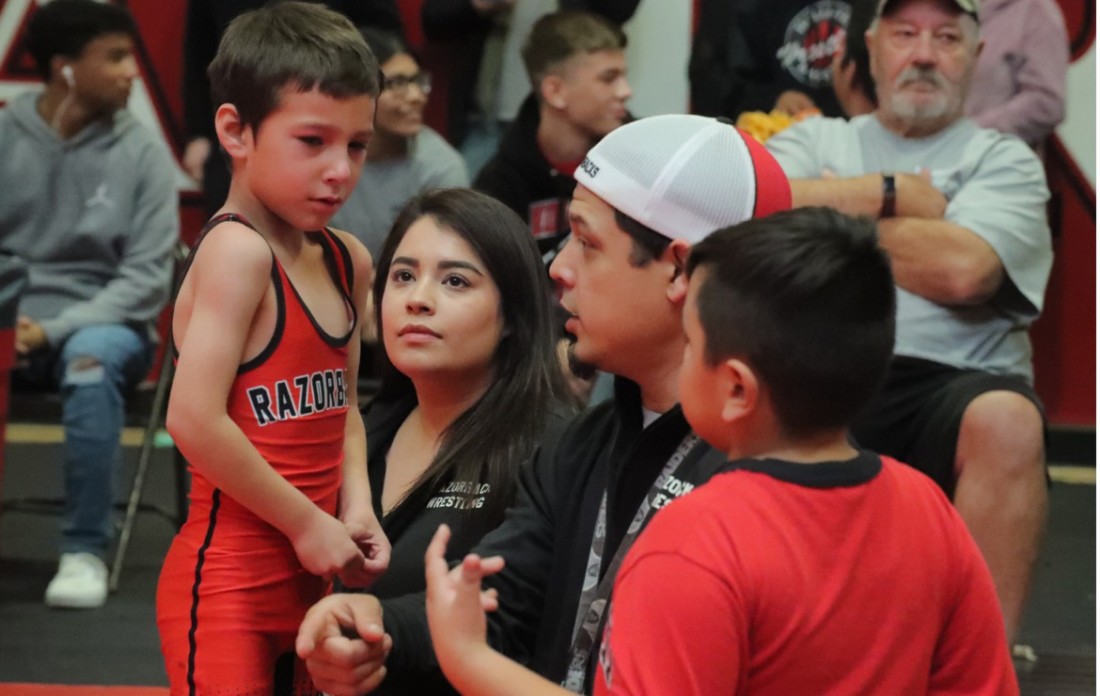 Steven Salcedo with a young wrestler. 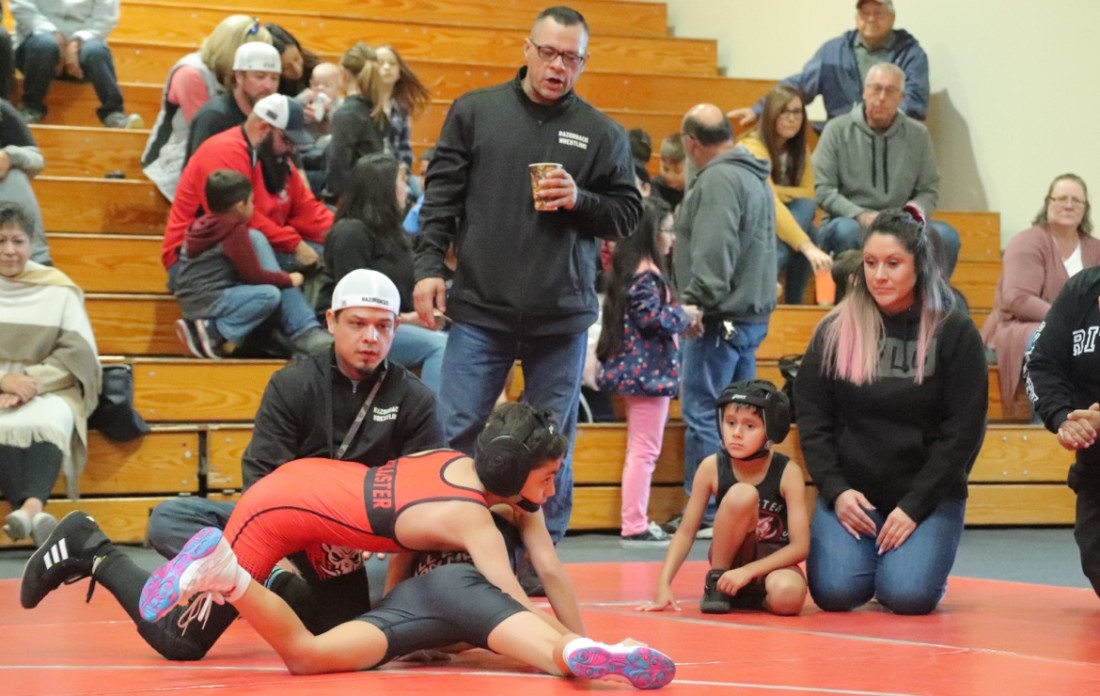 Coaches Steven and David work with young wrestlers starting at age six and continuing on through high school. 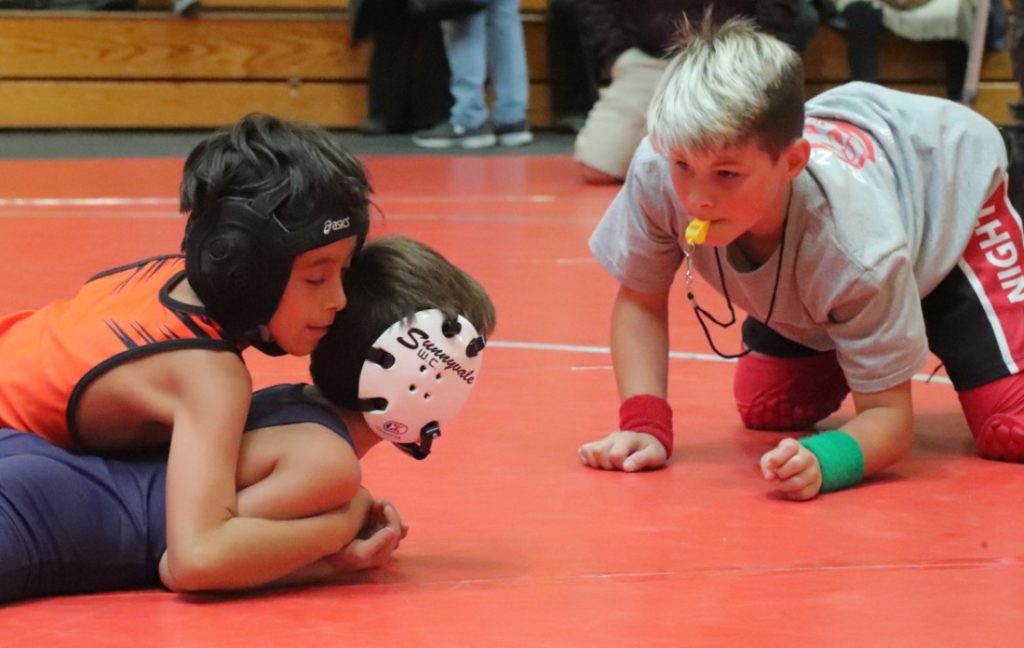 Two Razorback wrestlers face each other, staring intensely into each other’s eyes, ready to pounce. At the referee’s signal, the match begins. They go back and forth for a few moments until one takes a hard fall. He gets up, tears streaming down his face, and runs to his father who is at the edge of the mat.

The wrestlers are six years old, the referee is 12 years old, and the two coaches, brothers Steven and David Salcedo, watch for future San Benito High School wrestling and football champions, kids who will ripen in the coming years.

Hollister Razorback Wrestling offers year-round programs for boys and girls starting at age six and continuing on through high school. The focus at the Dec. 15 meet, though, is on the younger wrestlers.

Elias Garcia is six years old and joined the program three months ago. At this point, things are simple.

“My favorite part is taking down people,” Garcia said. “The coaches show us different techniques we use on our friends, then at tournaments we try to copy the same thing. It’s fun and I’ve been winning.”

The junior wrestlers are lucky to have their coaches. Both David and Steven participated in the program in high school and became champion wrestlers in their own right, moving on to teaching and coaching. They coach at San Benito High School and, with all the new housing coming to Hollister, the wrestling community is getting stronger.

David, 42, who serves as assistant coach under Steven, 35, started with the program 25 years ago.

“A lot of good families are coming from the developments looking to be part of the tight-knit community,” he said. “We have four or five brothers in the program now and sisters are getting involved. It’s great. You have moms, sisters, brothers at meets all yelling and it makes a world of difference.”

He sees the wrestling program as a way for young athletes to develop themselves while they decide what sport to pursue. About half the athletes who enter the program stick with it into high school.

“A lot of them are part-time wrestlers, football or baseball,” David said. “They learn the fundamentals, then come to the crossroads of deciding what sport they want to do. I see a lot of the kids developed through the wrestling platform and they will excel because of the work ethic.”

While students might branch out to other sports, David said they sometimes come back for a while.

“Maybe in their junior or senior years they might want to polish off their shoes, and since they still have the fundamentals, they get right back into it.”

Steven went from wrestling to football, and is now current head wrestling coach at San Benito High School. He became head coach in 2015, but his roots in the school and the Razorback program go back a long way. He began with wrestling over 20 years ago.

“I have a few Baler wrestlers right now that I have coached since they were little kids,” Steven said. “I even have coaches on my staff now that I coached through this program as kids.”

All that experience makes it easier to spot the ones with potential, he said.

“We have a couple middle schoolers now, even little guys eight or nine years old that we are looking forward to seeing in high school. I get to watch these kids grow up in different ways.   Sometimes it’s on the mat, learning how to overcome fear or execute moves. It’s more than winning and losing, it’s watching them grow in confidence.”

One of those up-and-comers is 11-year-old Stephen Seymour, who has been in the program for three years. Last year he started splitting his time between competing and refereeing. This means not only judging matches between kids his own age, but also judging matches where his fellow Razorbacks are competing.

“If they are on my team I have to pretend that the other kid is on my team so I don’t go easy on them,” Seymour said. “The good part is I get to meet new kids and have new challenges.”

Seymour works closely with Steven, learning new moves and wrestling with the coach.

“He teaches us to listen. And it’s like doing math. You keep learning and you just get smart at it.”

Seymour plans on going to San Benito High one day to continue his training in wrestling. “The school is great and the high schoolers are really nice.”

During wrestling meets, the Salcedo brothers often sit together and shout encouragement to the Razorbacks fighting it out on the mat. But they also bring their own perspectives.

“We are different people and we see things differently,” David said, adding that Steven is “more dug into the high school and I spread my energy around the junior highs. It’s a good balance.”

He said he gets the same satisfaction from working with the kids in the program.

“For me what’s special about it is just their resilience, watching them develop, from not being able to do a cartwheel to going on to win matches,” David said. “We see them gain confidence and maturity. It is awesome to be a part of it.” 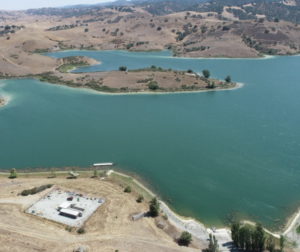 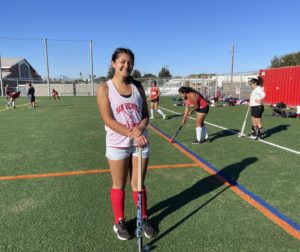 San Benito High field hockey on track to be champions

Games against rivals Christopher and Gilroy high schools will decide the winner. 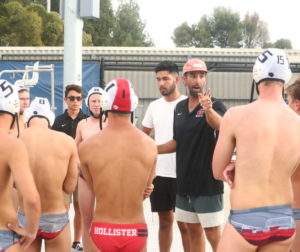 The team is working to find its rhythm in the water.