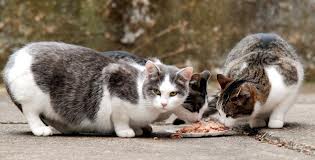 As I slurped my breakfast of leftovers yesterday while scanning the San Francisco Chronicle, I was startled by the image of an orange cat on the opinion pages. Startled because the cat’s jaws were firmly clamped around the neck of an American Coot.

It happens that the photo was by a friend of mine, and it was used to illustrate an Open Forum piece by Mike Lynes, the executive director of the Golden Gate Audubon Society. Once again, Lynes dared to broach a subject that — almost like gun control — inflames passions to a degree that renders reasoned discussion unthinkable.

Lynes was talking about the role that free-roaming cats play in the larger ecology of the United States. No matter how you feel about domestic cats, it’s a villain’s role. A peer-reviewed study by the Smithsonian Conservation Biology Institute and the U.S. Fish and Wildlife Service that was released just last week estimates that as many as 3.7 billion birds are killed by outdoor cats each year within the 48 contiguous United States. The number is so staggering that it bears putting in context, but it’s almost 11 birds killed for every human in the whole of the United States.

I know exactly the contents of the Pandora’s Box that Lynes opened with this morning’s article, because I once wrote about the same topic. I’m quite sure that I received more feedback for my trouble than for anything else I’ve ever written. I was accused, wrongly, of advocating for wholesale euthanasia of cats, of hating animals, of being uncaring and unfeeling. Really? Given a much larger forum, Lynes can expect only more of the same vitriol. For the record, neither of us has ever suggested a sanctioned hunting season for wild cats.

What Lynes said, and what I said many years ago, is this, and there’s abundant science to support it: free-roaming cats live shorter, far more perilous lives, and in the course of their short lives they kill a lot of animals that have a place at the planetary table as well.

There’s a reasonable alternative, and that’s to keep pet cats inside, where they’re safely removed from speeding cars, larger predators and the opportunity to kill wildlife.

Feral cats — those without homes to return to — is the largest issue, the study reveals. Cats without owners are responsible for an estimated 70 percent of all bird deaths. And it is thought that those same cats, unvaccinated and uncared for, introduced feline leukemia into populations of native cats, like mountain lions. Even with the care of well-meaning animal lovers who provide food, their lives are predictably short and violent.

How can anyone who claims to love animals think that there’s an alternative to confinement of cats? Free-roaming dogs are routinely rounded up and caged to await recovery. And that’s only right. Our pets are not our communities’ responsibility.

I once worked with a woman who stocked feeding stations for feral cats outside of our workplace, and I approached her to talk about it. Her take on it was that, since she trapped cats to have them spayed or neutered before returning them to the wild, the issue was not relevant. But given the opportunity, sterile cats will continue to kill. Food is the fuel that allows feral cats who are not yet sterilized to continue to make new cats, thus perpetuating the problem.

There’s certainly room in our lives for wildlife and cats. The solution just demands that we all take a deep breath, recognize that our companion animals remain predators, and do the right thing. Isn’t that worth the trouble of cleaning out a litter box now and again?