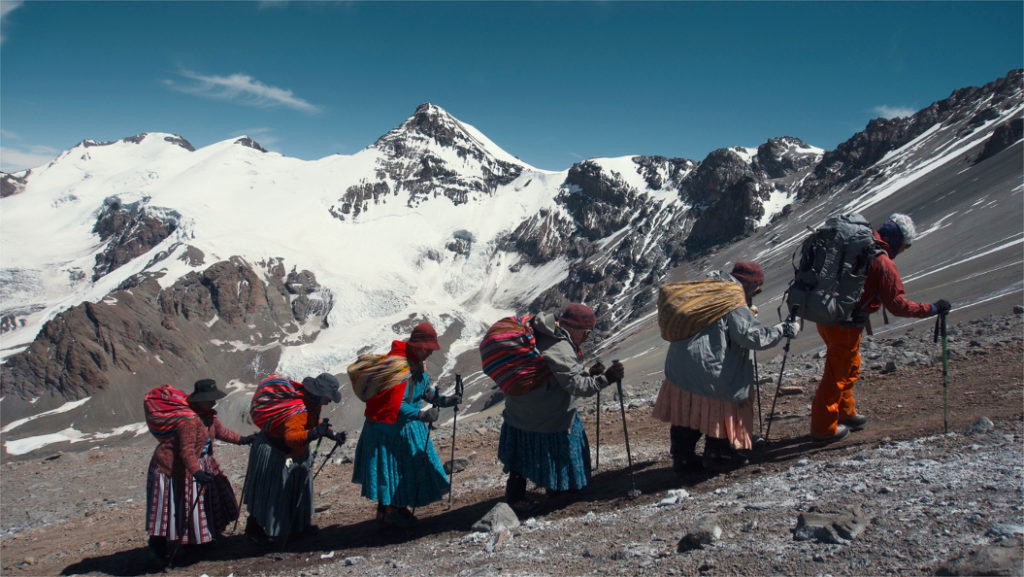 Still from "Cholitas," courtesy of the Watsonville Film Festival.
×

The Watsonville Film Festival has moved online this year, offering 20 films focused on Latino culture in North, Central and South America. The films range from local student productions to higher budget features and documentaries. All of the films and related special events are available free of charge on the festival website through March 13.

“The Watsonville Film Festival was founded in 2012 specifically to highlight the stories of Latino filmmakers,” said Consuelo Alba, festival co-founder and executive director. “Historically we have been underrepresented and this is a chance to highlight their talent and creativity. And this year we are offering a very rich program with a lot of films you can’t see anywhere else.”

Several of the films stand out to Alba, with the most popular so far being “Cholitas,” directed by Jaime Murciego and Pablo Iraburu.

“I could talk for hours about how wonderful all these films are,“ Alba said. “But this one is a favorite. We promoted it quite a lot in relation to International Women’s Day. It is about six Indigenous women from Bolivia who decide to climb the highest mountain in the Americas, Mount Aconcagua. It is an incredible journey of empowerment and these ladies are amazing.”

Another favorite is “Quinceañera,” directed by Fanny Veliz Grande, about a yearly event organized by a school principal for students who cannot afford to host their own.

“It takes place in a small town called San Benito in Texas,“ Alba said. “It is a delightful film about a community that comes together for a celebration.”

“El guardián de la memoria (The Guardian of Memory),” directed by Marcela Arteaga, is indicative of the quality of the films being presented at the festival, having won the Ariel Award for Best Documentary Feature Film, the highest film honor in Mexico.

“It is a remarkable film that takes place at the border in Texas,“ Alba said. “It focuses on the work of a human rights lawyer as seen through the eyes of an artist.”

Another film that’s been gaining attention is “Fandango at the Wall,” directed by Varda Bar-Kar. Produced by Carlos Santana, Andrew Young, and Quincy Jones, the film follows Arturo O’Farrill, founder of the Afro Latin Jazz Orchestra, as he travels to Veracruz, Mexico, to perform with masters of son jarocho music, a 300-year-old musical tradition drawn from African, Indigenous and Spanish roots. The film concludes with performances at Fandango Fronterizo, a festival that takes place on both sides of the U.S.-Mexico border.

There are also six special events hosted by the festival, which are presented live on Zoom and archived on the festival’s Facebook page.

One of them is an exploration of the themes of “Danzas Afromexicanas,” a film about four traditional dances from the Costa Chica in Mexico.

“It is a really amazing film and we had director Israel Reyes Larrea from Oaxaca speaking at the event,” Alba said. “It was filled with wonderful information and gave us a chance to recognize Afro-Mexican rights and culture.”

Along with the feature-length and short films, the festival includes four films made by local students: “Christmas Blues,” directed by Isabella Lara, “Disconnected,” directed by Angie Rockie, “The Sound of Water,” directed by Diego Lopez, and “Isolation: My Quarantine Story,” directed by Julián Lopez.

“So far people are responding to our films very well,” Alba said. “I hope these films make them feel inspired, I hope they feel connected. It has been such a hard year with people feeling so uncertain about the future. We want people to feel connected to each other despite our having to spend so much time at home.”

Each film can be viewed for 72 hours after registration. All films in Spanish or other languages have English subtitles.