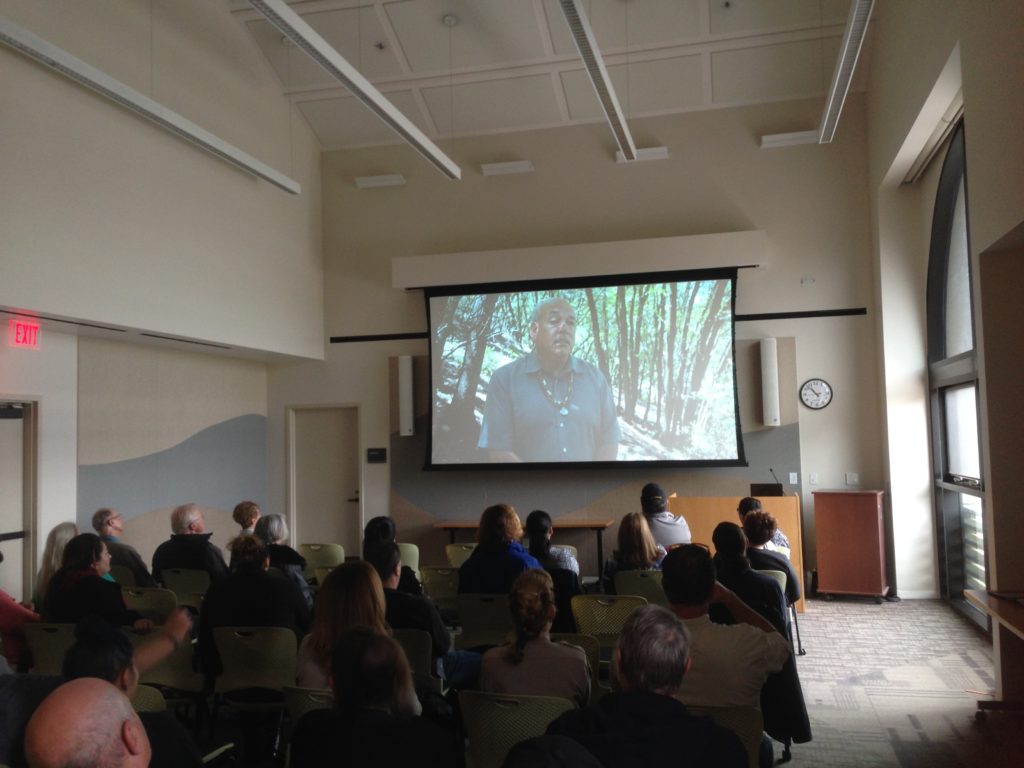 Tucked into the Pinnacles National Park is McCabe Canyon, “a botanically…and culturally significant” 240-acre parcel that’s home to a fragile, indigenous ecosystem, according to the National Park Service’s website. There, as their ancestors did for thousands of years, the Amah Mutsun Tribal Band, often joined by park staff and members of the Dunlap Band of Mono Indians, tends the white root sedge, the raw material used in traditional, California Indian basket making.

The collaboration underscores the Amah Mutsun Land Trust (AMLT), an effort by the tribe—descendants from the mission Indians of Missions San Juan Bautista and Santa Cruz—to partner with various government entities, conservation groups, businesses, educational institutions, and other natives peoples to steward and conserve their ancestral lands for generations to come.

On Saturday morning, March 12, the public was invited to attend a screening of, “Here and Now,” a critically-acclaimed, 18-minute film highlighting the AMLT. Presentations by a tribal member and an AMLT representative followed. Hosted by the Gilroy Historical Society, the event took place at the Gilroy Library.

Before the screening, Amah Mutsun tribal member, Cynthia Cordova, welcomed and thanked the forty attendees. Reading from a prepared statement, Cordova said that through its land trust the tribe hopes to “restore many of California’s landscapes before first contact,” a reference to Spanish colonization and the mission system that followed.

“Here and Now” opens with Amah Mutsun Tribal Chairman, Val Lopez, stating, “There’s not one inch of land in the United States that wasn’t indigenous land at one time. Our people developed relationships with Mother Earth. It’s a loving, caring relationship. One where we take care of Mother Earth and Mother Earth takes care of us.”

Next, the film moves through a series of examples documenting the AMLT’s efforts.

In one scene, Abran Lopez, a member of the AMLT Native Stewardship Corps, walks through the Quiroste Valley Cultural Preserve in San Mateo County, examining native grasses and plants alongside Director of Archeological Resource Management for the AMLT, Rob Cuthrell.

“I considerate myself fortunate…getting to engage in cultural activities, getting to tend the land as my ancestors would have,” Lopez tells the camera. Tapping his heart, he adds, “it hits me in a spot that I probably didn’t expect it would.”

Also mentioned is the Amah Mutsun’s unique partnership with Mid Peninsula Open Space (Midpen), “a regional greenbelt system in the San Francisco Bay Area” incorporating “over 60,000 acres of land in 26 open space preserves protected for public enjoyment,” according its website.

Midpen’s General Manager, Steve Abbors, explains that his organization encompasses Mount Umunhum (“The Resting Place of the Humming Bird”), the center of the tribe’s creation. Consequently, he says, the tribe has been an integral piece of his organization’s work.

As the film concludes, Val Lopez, who is standing on a trail to the sacred peak, says, “Our ancestors were given the responsibility to take care of these lands by Creator. And that’s just not the Amah Mutsun perspective. Most, if not all, Native American tribes have that same obligation, that same responsibility.”

Calendurac was the name Ketchum’s ancestors gave to the villages alongside the Monterey Bay to Santa Cruz. Many burial sites were found there, too.

According to the tribe’s religious beliefs, souls of the dead traveled across the sea to their final resting place. As “foam brings in land and takes it away…it brings life and takes it away,” Ketchum said.

The host city for Saturday’s event was originally called, Kululistac, “place of the elbow.”

Ketchum recounted a tale involving a young mother who was collecting basket making materials one day outside of her village. As the woman worked, her infant child remained by her side, sleeping inside a willow basket. When a disturbance erupted from the village, the woman decided to leave her baby unattended between a tree fork. She later returned to retrieve the child, and found to her horror only a tiny elbow.

A reminder of parental negligence, the tree was located on Monterey Street but removed by Caltrans decades ago, Ketchum told his audience.

The site where Mission San Juan Bautista is located was called, Trahtak, “place of many small waters,” so named for the many rivers and streams that once saturated the San Juan Valley.

At the foot of Pagan Hill (home to the cross that overlooks San Juan) was a cave used by native women as a birthing site. However soon after mission priests arrived, the cries of newborns reverberating off the cave’s walls were replaced by liturgical, Catholic hymns performed in Latin—the result of the Franciscans’ decision to hold mass there until a church was completed.

Called Ippitac (“place of the rattlesnakes), Fremont Peak, served as landmark for orientation, guiding those indigenous peoples from the coast and those from the Central Valley along an important trading route.

Ketchum finished with a story about the demise of Ukmi Wakkora, the one-legged devil who crawled upon his stomach searching for unsuspecting children who fell victim to his touch of electricity.

Sorrow among the villagers eventually spurred a collective effort to destroy the one who had brought about so much heartache. Somewhere among the rock outcroppings at the Pinnacles the monster was trapped and later dismembered by villagers, who later fed his remains to fire ants—their piercing stings a relic of Ukmi Wakkora’s evil presence, according to Amah Mutsun legend.

The universal message from this story, Ketchum explained, was “when we work together to accomplish a common goal we can do anything.”

For nearly 20 years, Flores has studied California’s native plants. As a doctoral student in the Environmental Studies Program at University of California, Santa Cruz, his research centers on the AMLT.

He also serves as Curator of California Natives Collection at the university’s Arboretum, “a research and teaching facility committed to plant conservation and serves both the campus and the public,” according to its website.

Flores explained that the cumulative effect of colonization upon the Amah Mutsun and their tribal lands was the destruction of “traditional ecological knowledge.”

The late Ascension Solorsano (de Cervantes), who died in 1930 and is buried today in the Indian cemetery at Mission San Juan Bautista, was regarded as the tribe’s last “knowledge holder.”

The famed ethnographer, John Peabody Harrington, spent countless hours with Solorsano in the final months of her life, documenting Amah Mutsun language, the tribe’s customs, and its ecological practices.

Housed in the Smithsonian Institute’s National Museum of Natural History, Harrington’s work is now being studied by researchers from University of California, Berkeley and the National Park Service.

The information learned has been shared with the tribe, including the various native plants traditionally used by Solorsano, a renowned tribal healer.

Flores also spoke about the AMLT activities occurring at McCabe Canyon. In addition to cultivating white root sedge, the tribe has conducted, under the supervision of NPS staff, traditional burning of deer grass.

In 2011, the Amah Mutsun Tribal Band conducted its first traditional burn in over a century, making headlines statewide. In response to the San Francisco Chronicle's coverage, critics attempted to snuff out the tribe’s revitalization efforts by posting unsavory comments on the daily's website and threatening the park system with lawsuits, Flores explained.

As Flores sees it, misconceptions about such native practices are rooted in history.

“When the first Europeans arrived, they described these lands as a Garden of Eden,” he said. But “what the Spanish failed to recognized was” that the bountiful landscape resulted from “traditional ecological knowledge and land management."

And in his expert opinion, California’s indigenous peoples “are a keystone species…a species that keeps things in balance.”

In closing, Flores outlined the purpose of the Amah Mutsun Land Trust:  As tribal members become active land stewards of their traditional lands they will heal from historical trauma and come together as a community.

"I was impressed with the material…and the willingness of entities, like the National Park Service, Midpen, and BLM [Bureau of land Management] to work with the tribe to reestablish their culture," she said.

Gilroy resident, Mike Schaut, who attended Saturday’s event, said that he found the film and presentations, “interesting and informative.” A Santa Clara County Roads and Airports employee, he explained to BenitoLink that in his work he constantly navigates through a series of regulations, including state laws SB 18 and AB 52 (also known as the CEQA Process).

The first mandates that municipalities consult with California native tribes when developing or amending general plans. And in an effort to protect tribal cultural resources, the other requires that public agencies notify local tribes when building projects are planned.

Schaut said he feels that his time spent at the Gilroy Library over the weekend will give him a new perspective in both his personal and professional life.

For the Amah Mutsun Tribal Band, restoring the California landscape may just begin with changing public attitudes and perceptions, one person at a time.

And perhaps the thirty-nine other individuals who joined Schaut on a cool, Saturday morning in March left the confines of the hushed library echoing his sentiments about the tribe's land trust: "You got to do things like that to keep your culture alive."