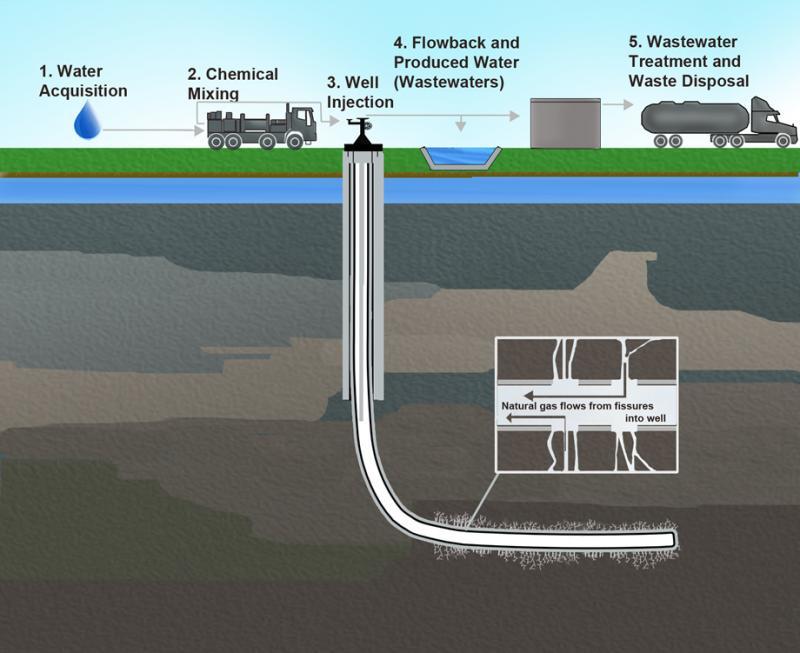 I have been researching the controversial Natural Gas Extraction method and government policy related to Hydraulic Fracturing. There is an active and vocal Anti-Fracking environmental activist group circulating petitions to ban the Hydraulic Fracturing process in San Benito County. I respect their opinion and share some of their concerns. But to be honest, I enjoy using Natural Gas in my home as a utility to fuel my central heater and the range in my kitchen. I have to believe that PG&E produces or purchases Natural Gas in a safe manner and distributes it to my home. And contrary to Anti-Fracking activists claims, I haven't heard of Natural Gas wells polluting drinking water supplies in California where there are about 200 active gas wells. In my opinion, we could use more gas wells, not less.

So I went online to the U.S. Environmental Protection Agency web site and was surprised to find that the agency actually supports Natural Gas hydraulic fracturing to improve supplies. The agency will publish its study of Hydraulic Fracturing and Its Potential Impact on Drinking Water Resources. But the writing is on the wall so to speak. The Federal Government supports 'Fracking'.

Acting Assistant Administrator for Water at the U.S. Environmental Protection Agency, Nancy Stoner, testified before the U.S. House of Representatives in 2012 that the EPA is helping to ensure that oil and natural gas and production activities can continue to be conducted in ways that contribute effectively to the Nation's energy economic recovery and security while protecting public health and water quality.

"The EPA and this Administration recognize that natural gas represents an important energy resource for our country. Increased reliance on gas has the potential to create jobs, promote energy security, lower energy prices, and reduce harmful emissions to air and water. At the same time, the Administration is committed to ensuring that production proceeds in a safe and responsible manner. We firmly believe that we can protect the health of American families and communities while enjoying the benefits of expanded national energy reserves." she said.

The testimony, available on the U.S. EPA web site – http://www.epa.gov/ocir/hearings/testimony/112_2011_2012/n_stoner_testimony.pdf – cites that States like California are the primary regulators of onshore oil and gas activities. The Federal Government has an important role to play by regulating oil and gas activities on public lands, providing research and development aimed at improving the safety of natural gas development and setting sensible public health and environmental standards.

The EPA promulgates and enforces federal statutes such as the Safe Drinking Water Act (SDWA), the Clean Water Act (CWA), and the Clean Air Act (CAA). States are responsible to meet or exceed primary and secondary drinking water standards, with organic and inorganic contaminants regulated by Maximum Contaminant Levels (MCL's) monitored by regular water quality samples collected and sent to certified labs. The results are required by law to be published by water purveyors as Consumer Confidence Reports available on an annual basis through the web or as a hard copy report.

The Safe Drinking Water Act provides a role for the EPA in regulating the construction, operation, permitting, and closure of injection wells that place fluids underground for storage and disposal. The EPA’s Underground Injection Control program and state programs with primary enforcement responsibility (primacy) are responsible for overseeing these injection activities. However, the Energy Policy Act of 2005 excludes hydraulic fracturing from regulation under the EPA’s Underground Injection Control (UIC) program except when diesel fuels are used in fluids or propping agents.

Diesel fuels in hydraulic fracturing fluids are a concern because they often contain benzene, toluene, ethylbenzene, and xylene compounds (BTEX). BTEX compounds are highly mobile in ground water and are regulated under national primary drinking water regulations because of the risks they pose to human health. People who consume drinking water containing any of these compounds in excess of the EPA’s drinking water standard over many years may experience health complications such as increased cancer risk, anemia, and problems with the nervous system, kidneys, or liver.

The EPA is in the process of studying and providing draft guidance to the regulated community, permitting authorities and other interested members of the public. Specifically, the draft guidance is intended to provide the public with a clear statement of EPA's present understanding of existing statutory and regulatory requirements for diesel fuels used in hydraulic fracturing wells, as well as technical recommendations for permitting those wells, tailoring UIC Class II permitting requirements to the unique characteristics of the hydraulic fracturing process. The goal of the recommendations in the guidance is to prevent migration of diesel fuels into USDWs and to protect human health. The EPA developed this draft guidance with input from a variety of groups, including industry, states and tribes, other federal departments and agencies, environmental organizations, and attendees of a public webinar. The EPA decided to seek public input on the draft guidance because of its importance to our Federal, state and tribal partners, to the regulated community, and to the public, and will fully consider those comments when developing the final guidance due out this year in 2014.

"The EPA’s activities relating to hydraulic fracturing are intended to ensure that public health and water quality remain protected as natural gas helps to promote our Nation’s economic recovery and security. Our work, along with that of our Federal and state partners, will help the nation promote the safe and responsible development of domestic energy resources while managing environmental impacts and addressing public concerns, thus ensuring that natural gas production can and will proceed in a safe and responsible manner." she said.

In essence, President Obama and the EPA support Natural Gas production by means of hydraulic fracturing methods in the United States. States and counties should provide rigorous environmental monitoring and oversight of natural gas extraction applications to ensure compliance with all environmental protection laws while encouraging this industry to improve the local economy, provide new jobs and reduce the country's dependence on foreign produced energy.