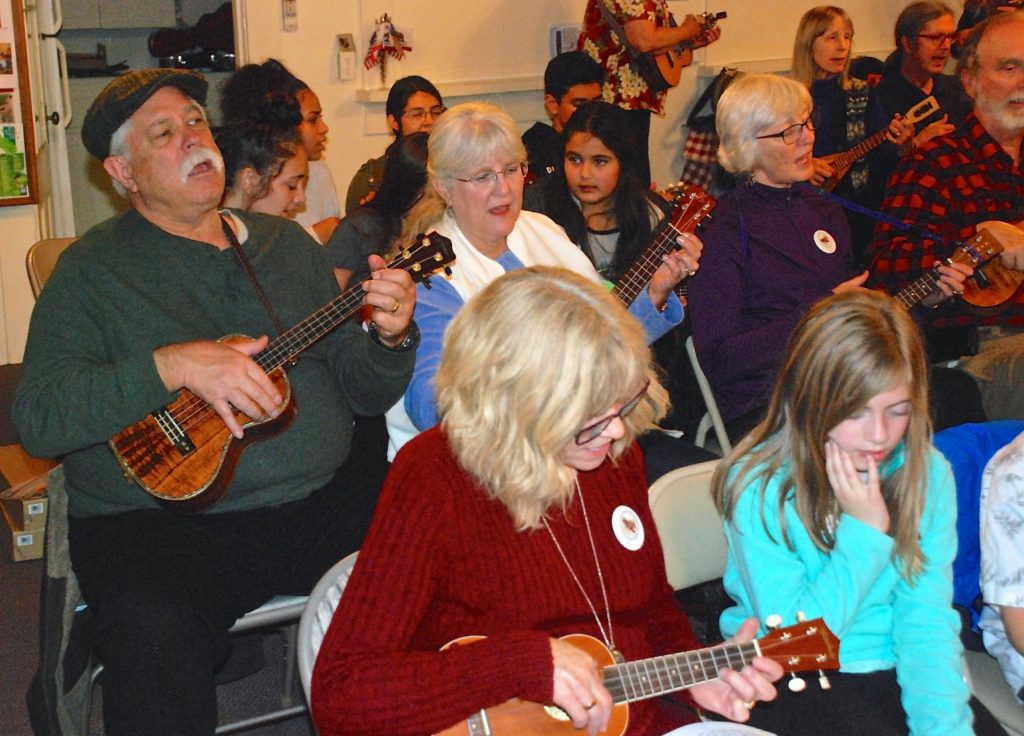 They came with ukuleles. Some people brought them inside tiny cases. Others had them tucked under their arms.

The event was the Rozas House Ukulele Concert & Clinic, Featuring Hiram Ka’ailau Bell. It was held March 10, at the Daughters of the Golden West Adobe, 204 4th St., in San Juan Bautista.

By the time it was over they had learned about the history of the instrument and how to play their first song.

Bell, who presented a solo concert afterward, is a native of Honolulu, Hawaii. He’s a master self-taught ukulele player, and has been teaching ukulele for more than 20 years.

Bell plays a variety of musical genres on the ukulele, from Hawaiian to blues and from classic rock to jazz and classical music.

“Everyone, on the count of three, make a C chord,” he tells the class. “Make an F chord. Make a G7 chord,” he instructed.

Handouts were passed around: a ukulele chord chart and a page showing the key of C major on the piano staff and the ukulele fretboard.

“We’re going to learn a song from the thirties,” he said.

But first, he gave a brief history of the ukulele.

The instrument is closely associated with Hawaii. In fact, the last ruling monarch of Hawaii, Queen Lili’uokalani, call the ukulele the Hawaiian instrument. It was, however, invented by the Portuguese, Bell said. Portuguese immigrants, mainly from Madeira and the Azores, brought the instrument to the Hawaiian Islands.

In Portugal, the instrument is call a machete. It’s a small guitar-like instrument related to the lute.

Manuel Nunez (1843-1922) was a Portuguese immigrant to Hawaii. He is known as the inventor of the modern ukulele. He arrived in Honolulu in 1879 and worked as a laborer and a cabinet maker. By 1889, he and two other Portuguese immigrants were listed in the city director as guitar makers.

The next step at the clinic was tuning up. Ukuleles are tuned to the key of C: G C E A, from top string to bottom string. The tuning is often referred to as “My dog has fleas.”

Bell taught the class the C major scale. It’s the same as 12 notes on the piano in the key of C. He urged them to practice it over and over to build muscle strength in their fingers.

“Speed is not as important as accuracy …,” he said. “A major scale sounds happy. … This is the most important thing I can teach you in terms of playing melodies,” he said.

The students then played a chord progression together: G7, F, C; G7, F, C, with four beats to each chord.

“Don’t be impatient,” Bell said. “Speed takes care of itself. Just relax and have fun with it. Free your mind up of any kind of baggage. … You guys are doing awesome.”

With words and chords printed on a handout, the class played and sang “You Are My Sunshine.” It was written by Jimmie Davis and Charles Mitchell and first recorded in 1939.

“We did pretty good for one hour,” Bell said.

After the room cleared, he got ready for his solo concert, which had a separate admission fee.

Money raised from the ukulele event will benefit Rozas House Org. Inc. The nonprofit works to preserve elements of early California history and to educate people about the era.

At 10:30 a.m. April 21, the same group will cut the ribbon for the San Juan Bautista Historical Walking Trail. The event starts at the Anza Adobe, at the corner of Franklin and 3rd streets. An oral history linked to a cell phone application will be part of the tour.