Authorities suspect that body discovered near San Juan-Salinas Grade Road is that of Yoon Ji, whose husband, Sang Ji and a South Korean citizen, Jung Choi, were arrested on suspicion of murder. 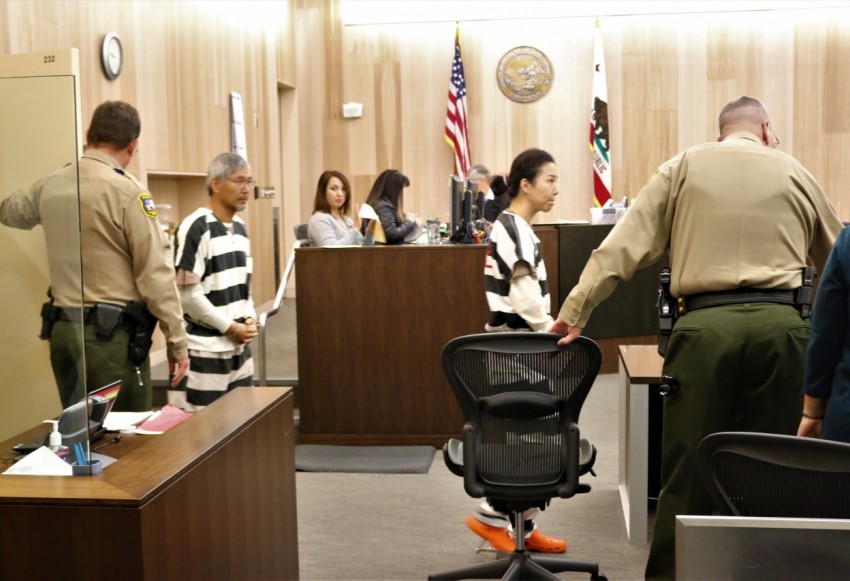 Sang Ji and Jung Choi are led into the courtroom in chains. Photos by John Chadwell. UPDATE: The San Benito County Sheriff’s office released information Dec. 23 that the autopsy of the body believed to be that of Yoon Ji has been positively identified through fingerprints. The preliminary examination determined the most likely cause of death was blunt force trauma. Ji’s body was discovered by the FBI and the use of cadaver dogs close to San Juan Grade Road, outside San Juan Bautista.

Authorities have notified the two adult children who first told the Sheriff’s office of their mother’s mysterious disappearance.Sang Ji and a female companion, Jung Choi, 45, were arrested on suspicion of murder. Ji and Choi are scheduled to appear at the San Benito County Superior Court Dec. 28.

“We had some investigative evidence that led us to a certain area off Salinas Road far into a canyon and the dogs alerted over a gravesite,” said Capt. Eric Taylor, public information officer for the Sheriff’s Department, Dec. 21. “We used the FBI Response Team and the Santa Clara County Search and Rescue human remains detection dogs. The FBI team was able to uncover the remains and recover her.”

Taylor said the remains would be taken as early as Dec. 22 to Santa Clara County for autopsy to determine the cause of death. With the investigation still ongoing, he said more details cannot be released, but he did say, “We have the two people who are responsible. We’re confident of that.”

Capt. Taylor told BenitoLink inside San Benito County courthouse that the body was discovered yesterday.  Sang Ji and Jung Choi appeared before Superior Court Judge Steven Sanders for a continued arraignment. Ji and Choi used an interpreter to communicate with Judge Sanders as he determined if they had legal counsel.

Choi, through the interpreter, told the judge that her brother was coming from Korea Dec. 25 to meet with an attorney, but she did not know when the meeting would take place. She said she heard her brother met someone from the consulate in South Korea to arrange for a lawyer, but she had not been contacted by anyone yet.

“It sounds like the meeting has occurred and perhaps you’ll have an attorney here imminently,” Sanders said and then told her he would grant her a continuance until Dec. 27, at which time her attorney needed to be present. Choi asked if it would be possible to come back on Dec. 28, instead. Sanders agreed to her request and told her to be back then, along with her attorney for “identification of counsel for continued arraignment” and that her bail remained at $2.01 million.

Sanders then asked Ji if he had talked to a lawyer and the interpreter said he had not. The judge waited at length as Ji spoke to the interpreter, who then explained, “My two daughters talked to an asset manager lawyer and she visited me twice. But I’m in jail and all my assets are under two names, so there’s nothing the lawyer could do and I was not able to hire a lawyer because of my situation.”

Sanders asked Ji about the status of his business, Hollister Laundromat at 341 Tres Pinos Road. Ji told him it has been closed since his arrest. He said he had no income from the laundromat or his company. Sanders told Ji he would appoint a public defender.

Attorney Gregory Michael LaForge stepped in as the appointed public defender and stated that Ji was pleading not guilty. He said it was his understanding that the court wanted to keep Ji’s and Choi’s cases together. Sanders affirmed that he did.

Sanders told Ji he had the right to a preliminary examination within 10 court days or 60 calendar days. Ji did not appear to understand the meaning of “preliminary examination,” and Sanders explained it to him at length as he stopped for the interpreter. He explained that it was to determine if there was enough evidence to convince a judge that there is “strong suspicion that you committed the crime you’re accused of. If the prosecution can’t introduce enough evidence to allow a judge to believe that,” Sanders continued, “then you have the right to have the charges dismissed before going to trial.”

Sanders concluded by telling Ji his bail was also $2.01 million.

As deputies began to lead Ji away in ankle chains and arm restraints, the interpreter passed along Choi’s concern that it did not look like she would be able to hire an attorney. Sanders told her that if that were the case she, too, would be given a court-appointed public defender. He told her he was aware that she had considerable financial assets, but it was a question whether she would be able to access them.

Outside Courtroom 3, Attorney LaForge said he could not comment on the case because he had yet to meet his client, Ji.

Hollister Laundromat remains closed with a balloon memorial tied to the front doors, along with an angry note basically stating if anyone steals the balloons or anything from the business they “will go to hell.”

Next door, inside the Smokers Paradise, clerk Lucy Delia described Yoon Li as a wonderful woman who was very friendly and greeted her every day. “Everyone here was very shocked,” she said, adding that she did not know Sang Ji beyond seeing him occasionally.

“I was close to her. She was here every single day. We’d see the husband, and he was nice, but it was just ‘hi’ and that was it. I just hope something gets resolved. Nobody knows what’s going on.”