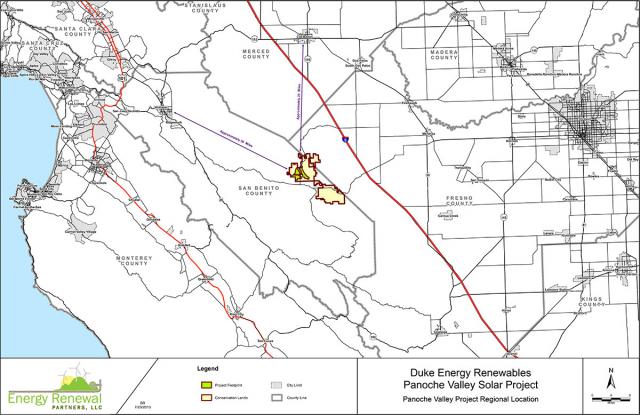 The San Benito County Board of Supervisors on May 19 unanimously rejected appeals to the county Planning Commission's approval of a supplemental environmental impact report for the planned Panoche Valley Solar Project, bringing the long-planned 247-megawatt project closer to fruition.

Environmental groups and other, unnamed opponents, called on the county to reconsider the approval of the EIR, claiming it failed to adequately disclose and mitigate potential impacts of the scaled-down project, which the county originally approved in 2010. During a public hearing Tuesday in the supervisors' chambers, both sides had their say before the board, which voted to keep the project moving ahead of the expected start of construction by the end of summer — pending further environmental review at the state and federal levels.

County supervisors in October 2010 certified the final EIR for the solar project and the planning commission unanimously approved its use permit. A month later, the board considered an appeal of the commission's approval and unanimously upheld the decision, adopting an ordinance approving a development agreement for the project. Those actions prompted several project opponents to sue the county, alleging the certification of the final EIR and approval of the project was unlawful and violated, among other laws, the Williamson Act and the California Environmental Quality Act.

Since the Board of Supervisors and Planning Commission's approval of the project in 2010, Panoche Valley Solar, LLC — the successor to the initial applicant (Solargen Inc.) — refined the project's scope to make it a smaller and less dense, 247-megawatt project. A county report says the revised project has a reduced "permanent disturbance area and larger, on-site valley floor conservation area." It also has reduced the proposed five-year phased construction schedule to an 18-month timetable.

The county in 2011 retained a consulting firm to prepare a supplemental EIR to address the project changes. That report was released in December 2014 for a 45-day public review and comment period and the final, supplemental EIR, which includes the county's responses to significant environmental issues raised by comments to the report was released on April 10 of this year. The Planning Commission on April 25 at a public hearing unanimously approved certification of the final SEIR and use permit for the project, prompting the appeals from opponents.

Groups calling for a re-circulation of the EIR because they say it fails to adequately analyze and mitigate for the project's impacts include the Sierra Club, Santa Clara Audubon Society, Defenders of Wildlife, Audubon California, and the Center for Biological Diversity. A group of unnamed individuals, called "San Benito Residents for Responsible Development," filed an appeal of the Planning Commission's decision for similar reasons.

After the hearing, project supporters held press conference and reception in the Gabilan Room of the Hollister Community Center.