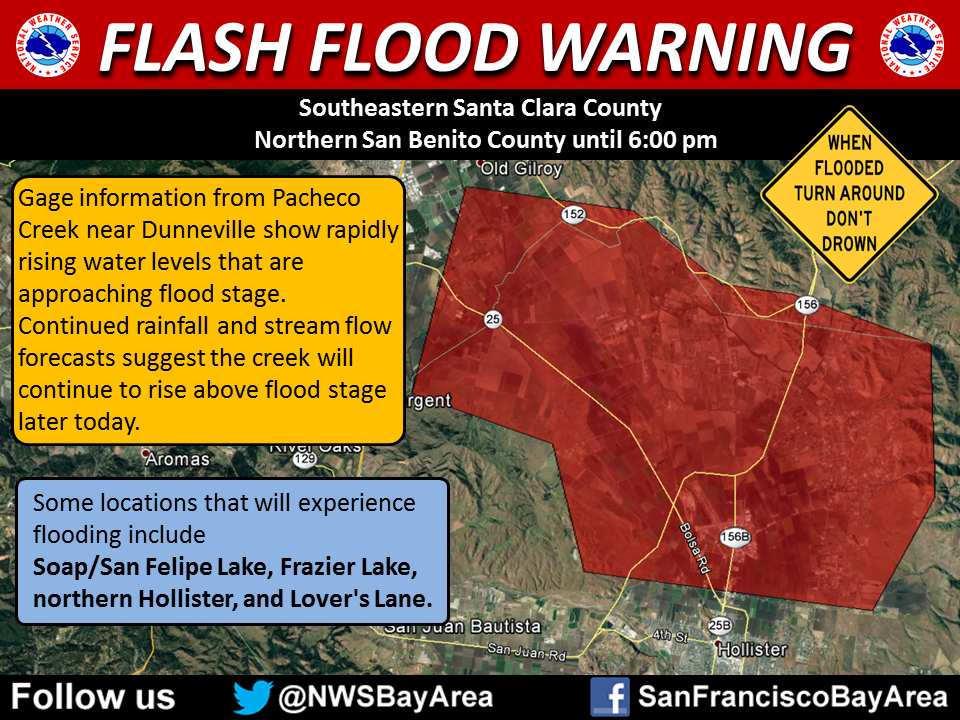 The National Weather Service on Tuesday morning issued a flash flood warning for northern San Benito County — encompassing the flood-prone areas near Lovers Lane and San Felipe Road north of Hollister. The warning, which means that flooding is imminent or occurring, is in effect until 6 p.m. Rising creek waters also prompted voluntary the county to issue evacuation orders as Pacheco Creek neared the 16 foot mark and was rising. The creek's moderate flood stage is 12 feet.

According to a weather advisory from the NWS, stream gage information from Pacheco Creek near Dunneville shows "rapidly rising water levels that are approaching flood stage. Continued rainfall and stream flow forecasts suggest the creek will continue to rise above flood stage later today.

The locations expected to experience flooding include: Soap/San Felipe Lake, Frazier Lake, northern Hollister, and Lovers Lane. Local law enforcement officials issued a warning saying, "if you are not in the area, please avoid Lovers Lane and San Felipe Road in the area around Pacheco Creek."

The weather service encouraged people to avoid the area and "turn around, don't drown when encountering flooded roads, as most flood deaths occur in vehicles. If you are in the warned area move to higher ground immediately. Residents living along streams and creeks should take immediate precautions to protect life and property."