15 rifles and more than 3,000 rounds of ammunition found. Police say the weapons were stored for use by gang members 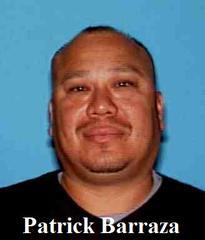 The man wanted in connection to the arsenal of guns found in Hollister on May 4, has turned himself in to police.

On May 7, Patrick Barraza, 47, turned himself in to police at the office of his attorney. He was placed under arrest by Hollister Police detectives without incident. Barraza was transported to the San Benito County Jail where he was booked for various felony charges involving the firearms, ammunition and illegal items found in his home.

The Hollister Police Department, with assistance from multiple agencies, on May 4 recovered several illegal weapons and ammunition they say was destined for use by gangs.

Over the course of several weeks, police officers said they have been developing information related to a large amount of firearms being stored in the Hollister area for use by criminal street gang members.

At about 8 a.m., officers and agents arrived at a home located on the 1500 block of McCloskey Road. Officers had to force entry into the home. The suspect in this case, Barraza, was not home at the time but police located three family members in the home.

A search of the house recovered the following items: 15 rifles, including three AK-47/SKS assault rifles, three handguns, three ballistic vests, several bags filled with high capacity magazines including at least one 100-round magazine. Police estimate more than 3,000 rounds of ammunition were also recovered in boxes and bags along with the firearms.

Anyone with information on his whereabouts or on this case is asked to call the Hollister Police Department at 636-4330. Persons wishing to remain anonymous can call the WeTip Hotline at 800-87-CRIME. Information provided to WeTip may qualify for a reward.