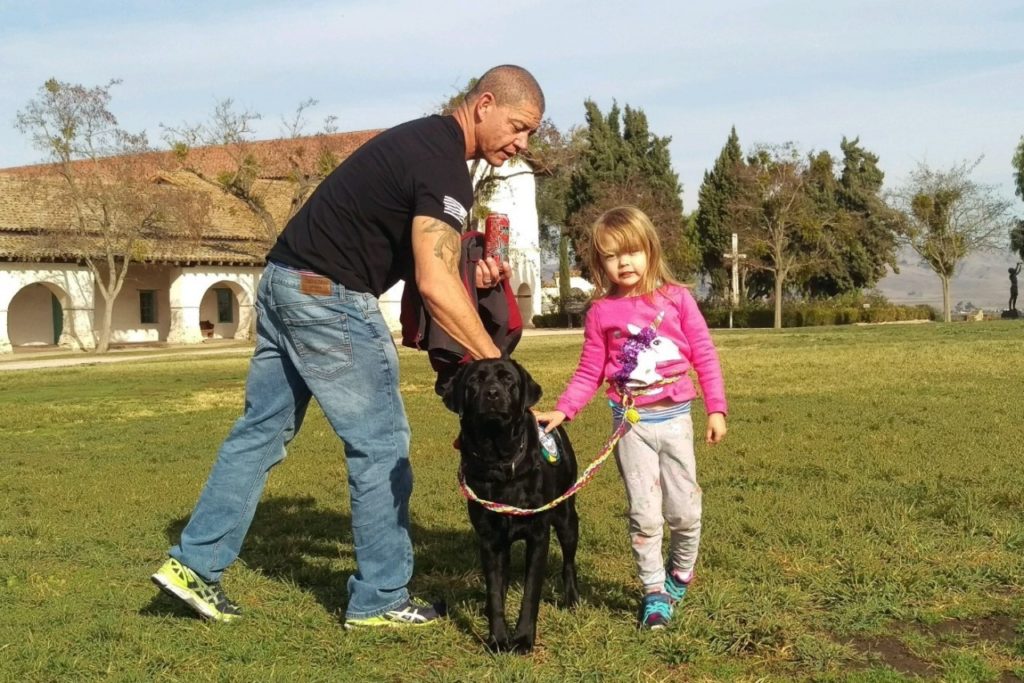 The Urata family of Hollister received an autism service dog, Dec. 28 from the Service Dogs by Warren Retrievers (SDWR) for their four year old daughter Kelani. The SDWR is a national organization that raises diabetic alert dogs, PTSD service dogs, seizure response service dogs, and autism service dogs. For Karla Urata the search for a service dog started after a particular scare where Kelani eloped from the family’s backyard. According to the “Autism Community” website, “Elopement is when a person leaves an area without permission or notification which usually leads to placing that individual in a potentially dangerous situation”.

This event put Karla Urata on a multi-month search of trying to find the perfect service dog for her daughter that would help with regulating potential meltdowns, decreasing anxiety, increasing her daughter’s freedom, as well as finding Kelani when she hides or possibly elopes. After talking on the phone with the SDWR and learning that they trained dogs for younger children and would come to her home, Urata knew she had found a fit for her daughter.

The SDWR is a non-profit organization based out of Virginia that works with families for over a year, once they have gotten their dog, for the greatest chance of success. Before a family receives a dog however, they must raise half of the cost of the dog which is $25,000. The other $25,000 is raised by the organization which has a department dedicated to raising funds for the service dogs. For the Urata family raising their portion of the payment was done through generous support and/or donations from the Diocese of Monterey, the Community Foundation for San Benito County, parishioners of Immaculate Conception Church, Forgiving Paws, as well as friends and family. The Urata family intends to have a blessing at the church to say thank you to the community. Urata credits friends and family with being a key reason they were able to receive Lisa, who Urata said is a “blessing” and the perfect “counter balance” for Kelani.

Cheri Campbell, Training Director for SDWR, who came to not only deliver Lisa and work with the family said, “With autism service dogs you can see the results immediately”. These results according to Campbell include the joy she sees on kids’ faces, a good night's sleep and the ability to grow socially. These results have already been felt by the Urata family in the short time since receiving their dog. Urata said the results have been, “better than I could have imagined." Kelani could be found safely running around the grass area at the San Juan Bautista Mission tethered to Lisa. Urata said that by having Lisa, Kelani is able to walk around, have increased awareness of her surroundings, as well as have a decreased time from recovering from moments of frustration. Kelani's father Chris Urata agreed saying, “I never imagined I could leave my kid with a dog this quick,” but felt confident doing so due to the, “quick development of the bond between Kelani and Lisa”.

The process of training Lisa to be the perfect fit for Kelani will not stop when Cheri boards a plane to return to Virginia. Over the next 18 months the Urata family will have weekly phone check-ins with SDWR and will have trainer visits roughly every three to four months to support the family through this process. The organization requires constant communication according to Campbell so they can be certain they are customizing the, “dog to her (Kelani’s) needs”. When asked about the dogs she trains, Campbell said the biggest satisfaction was seeing children,"gain freedom and grow socially”. Watching Kelani run around the grass area, as her parents grinned from ear to ear, it was evident that Lisa was the “blessing” Karla Urata had described.