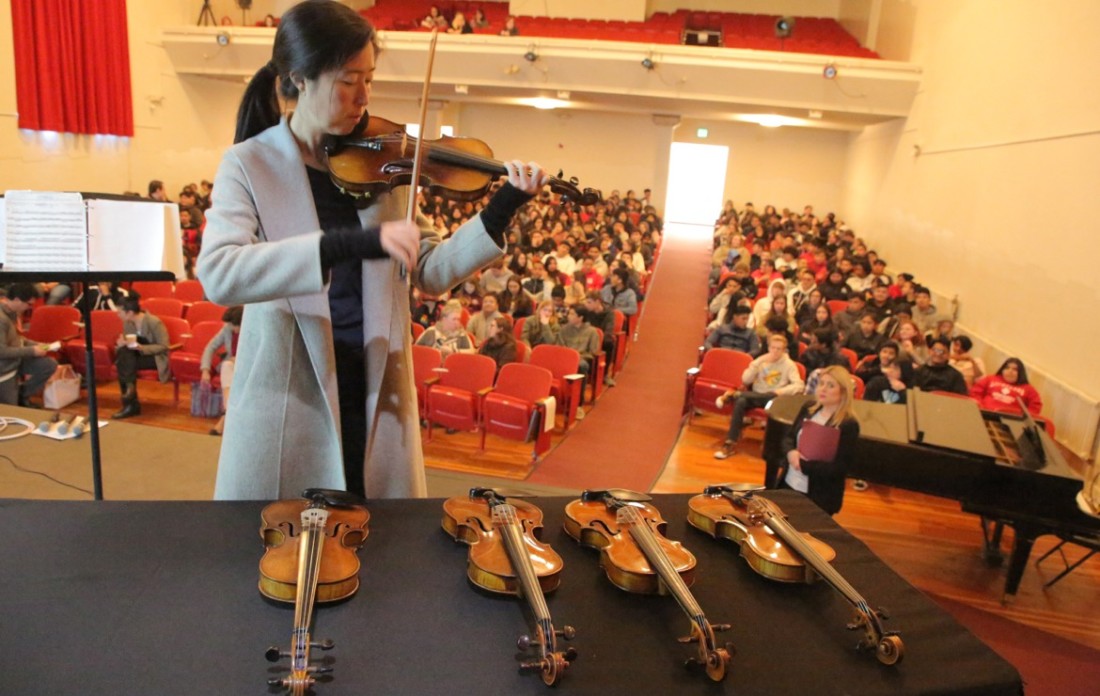 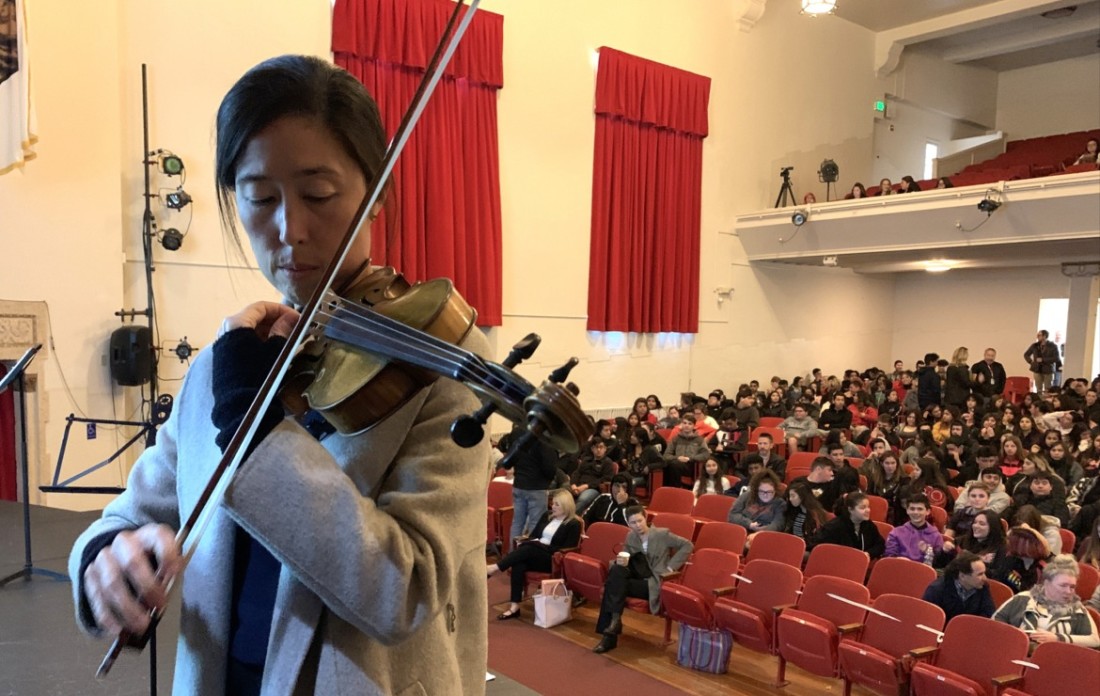 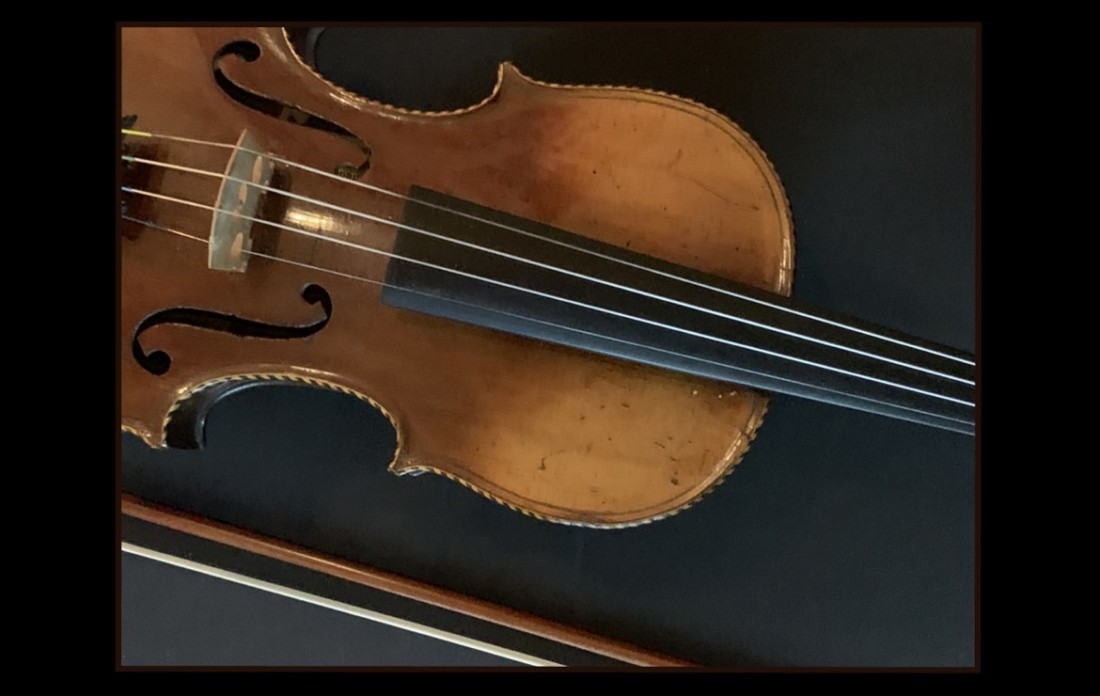 SBHS students learn about the late David Arben and his journey from concentration camp prisoner to performing musician. 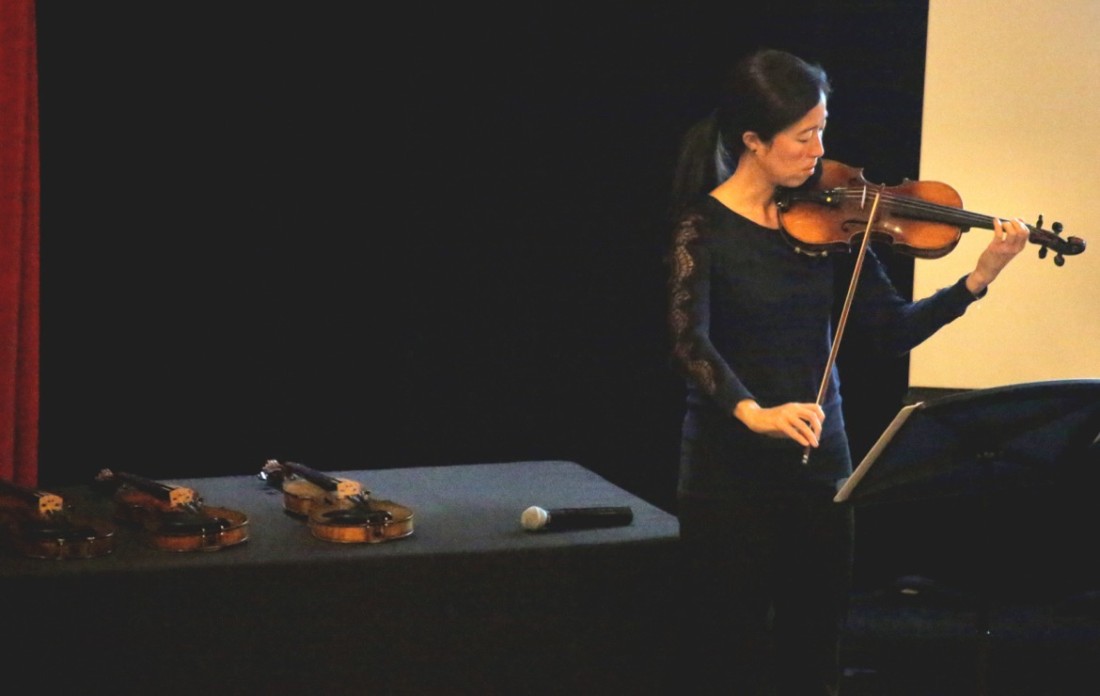 Before becoming an acclaimed concert violinist, David Arben stood at the gates of a Nazi concentration camp awaiting his fate. Clutching his four-string talisman, the then-teenage Arben watched as over 100 of those who had arrived with him at Flossenbürg were condemned to death.

Violinist and author Rebecca Jackson and her sister Elizabeth recounted Arben’s story to hundreds of SBHS students through Violins of Hope, a Holocaust education program that combined the retelling of the late Arben’s life with the sound of violins once played by individuals looking for respite from the confines of the Lodz ghetto or by others whose daily salvation at Auschwitz rested with their ability to hold their notes as thousands were sent to the gas chambers. The program of two one-hour presentations took place in the school’s auditorium in early February.

Founded in the 1980s by renowned father and son luthiers Amnon and Avshalom Weinstein, the Israeli-based Violins of Hope collection includes 80 string instruments that belonged to prisoner-musicians and which the Weinsteins have since restored.

Beginning in January, 50 of the priceless Holocaust-era instruments made their West Coast debut, accompanying classical orchestras in concert halls, serving as museum exhibition centerpieces, and complementing existing Holocaust curriculum in middle and high schools throughout the Bay Area.

According to the San Francisco Bay Area chapter’s website, the goal of Violins of Hope is “to unite and engage a broad group of communities in a variety of programs that will address the root causes of hate, bigotry, and marginalization, and promote healing and bridge-building in response to contemporary concerns.”

Born into a loving, middle-class Jewish family in Poland in 1927, Arben was introduced to the violin through a visit to the barbershop. World War II derailed his musical ambitions and upended his world, as he and his family were thrusted into the Warsaw ghetto. Separation soon followed.

Utterly alone, Arben arrived at the Flossenbürg concentration camp in Germany. When an SS officer saw the 13-year-old was holding a violin, the Nazi culled him from the line of new arrivals.

Spared from execution by firing squad, Arben spent the next four years playing for the camp orchestra, explained Jackson, who with her father John Jackson recently co-authored, “Arben: David Arben’s Life of Miracles & Successes.” A Juilliard-trained violinist and the founder of the Santa Cruz-based Music in May, Rebecca Jackson punctuated parts of Arben’s narrative with solos performed on five violins from the Violins of Hope collection.

Music by Johann Sebastian Bach, Joseph Achron and Jules Massenet emanated from the restored instruments, filling the high school auditorium with feelings of anticipation, despair, and hope, the range of emotions that characterized Arben’s life.

After liberation, Arben immigrated to the United States, where he was a fixture in the Philadelphia Orchestra for over three decades. Following his 1963 solo performance in Berlin, Arben proclaimed that Hitler had not destroyed the mind or spirit of the Jewish people.

Before his death in 2017, Arben said to Jackson—his student and protégé—that he had hope for humanity and that “anyone who hates doesn’t like themselves.”

Arben’s story, the priceless violins, and the Jacksons were brought to the high school campus through the efforts of world history teacher Shae Walker, who participated in a Violins of Hope teacher workshop in the fall and placed SBHS on a short list of Bay Area schools that were chosen to host the Holocaust education program.

“Shae’s passion for teaching the Holocaust and her unique approach to teaching it through the lens of music impressed us,” said Morgan Blum Schneider, director of the Jewish Family and Children’s Services Holocaust Center. The organization facilitated the teacher workshop and partnered with the Koret Foundation to offset most of the costs associated with the Violins of Hope school program. The SBHS School Site Council also contributed funding.

Students who attended Violins of Hope learned more about the Holocaust and the instruments that came to define those affected by it.

“David Arben’s story taught me a lot about the terrible experience faced by the Jewish people and how they survived,” said sophomore Evan Mendoza.

Fellow 10th grader Sierra Redding said, “It’s incredible to think that something as simple as a violin can encapsulate a historical period, like the Holocaust.”

To learn more about Violins of Hope, visit violinsofhopesfba.org.