This is the fourteenth in a series of articles in which local adventurer Jim Ostdick will introduce readers to the many walking opportunities throughout San Benito County. 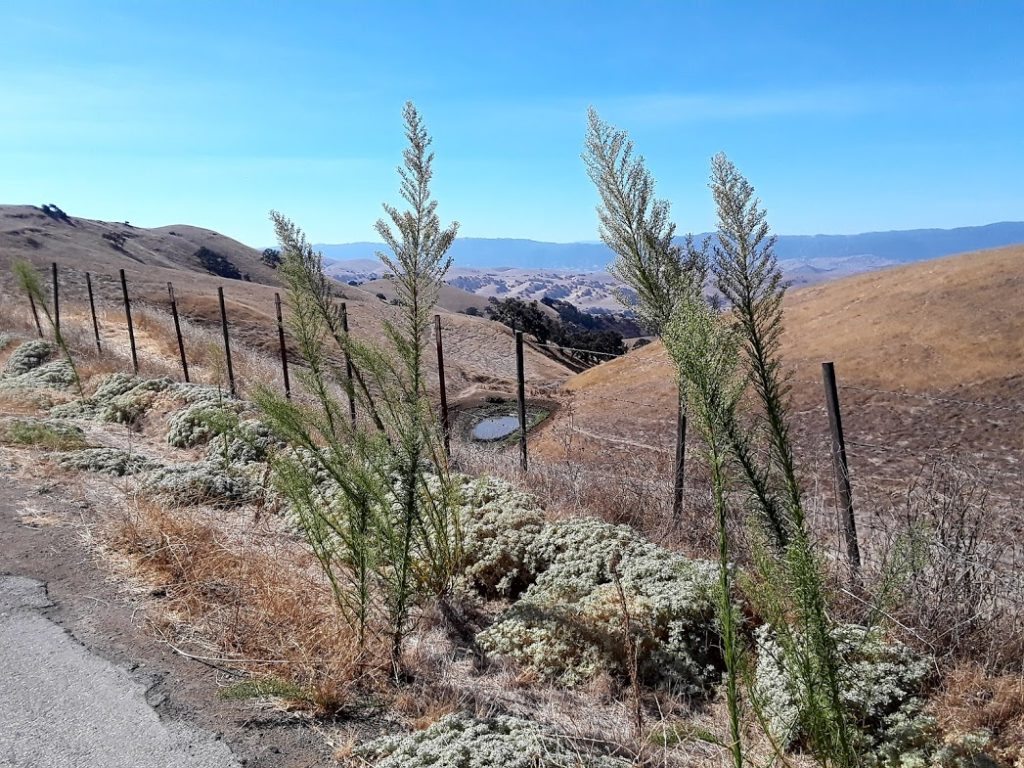 Note: Please be aware of the high fire danger in all grassland or brushy areas of San Benito County. Activities like idling vehicles along county roads, mowing dry grass, using motorcycles and 4-wheelies in dry areas can endanger the whole community.

I am kidding, of course. Tarantulas are not that threatening. They really won’t bother you unless you are dumb enough to approach them from above to try to pick them up with your hand. They will sense that as an action by one of their natural predators, like a hawk swooping down from the sky. If, however, you place your hand palm down on the ground in front of a tarantula, it will probably crawl right over it. Depending upon how squeamish you are, that will either tickle a little or it will make you scream. But really, the tarantula won’t be able to tell the difference between your hand and a chicken burrito. Stay calm and get tickled. You can scream later.

On the first Sunday of October, driving up to the cattle guard at the peak of Quien Sabe Road, I saw a few tarantulas crossing the sun- warmed, two- lane pavement. During the fall mating season, that is a pretty common sight in the countryside away from city traffic. I elected not to mess with them, hoping to see some again after I parked to go for a walk.

On a pleasant, sunny, autumn day, Quien Sabe Road is a beautiful, quiet place to hike, as long as you stay on the road and respect the fenced-in ranch land. The steep-ish grade down to Santa Ana Valley Road and back will challenge your lungs and thighs while the views up to nearby Cibo Peak and faraway Fremont Peak will please your eyes.

Cibo Peak, like many of the peaks of the Diablo Range, is made of basalt. It formed as part of a volcanic island arc on the ocean floor and was scraped off, or accreted, onto the edge of the continent back when the Farallon Plate was being subducted beneath North America. As subduction ceased, the volcanoes went extinct and the tops of them began to erode. They are still visible as the mostly cone-shaped peaks seen on the eastern skyline of San Benito County today. The tan-colored, dirty sandstone you see exposed on the side of the road is greywacke, a jumble of old ocean and beach sediments that geologists call the Franciscan Formation. You can see those rocks practically everywhere in our part of the Coast Ranges if you look for them.

I had another goal in mind that Sunday besides getting in my miles and looking for spiders. Our ambitious friends from Off the Chain Bikes in Hollister were taking on a really big challenge – the San Benito Death Ride – and they needed some sag support. So after my walk, I waited up at the top with cold drinks and snacks while these crazy, but otherwise respectable people climbed their third peak of a one hundred mile ride. They began that morning at the bike shop in Hollister, rode to San Juan Bautista, climbed Fremont Peak, rode back to Hollister, and climbed to the top of Lone Tree Road. Then they rode over Santa Ana Valley Road and up to the top of Quien Sabe, down to Tres Pinos to Southside Road, and back to the bike shop. Insane! My hiney hurts just thinking about it.

If you want to take part in next year’s Death Ride, contact Brian or Chris at Off the Chain Bikes. If you would rather simply beat your feet for a couple of hours on a country road, give this Quien Sabe hike a try.

And please, my friends do not litter.

For directions to the top of Quien Sabe Road, please click here. 1,411 people have tested positive since February, 17 are active patients, 1,380 have recovered and 14 have died; the county’s current positivity rate is 1.9%.

1,407 people have tested positive since February, 20 are active patients, 1,373 have recovered and 14 have died; the county’s current positivity rate is 1.9%.

1,403 people have tested positive since February, 18 are active patients, 1,371 have recovered and 14 have died; the county’s current positivity rate is 2.8%.