Nominations are open now through Friday, Aug. 29 for the 2014 Gavilan College Community Spirit Awards. Anyone who lives or works in the Gavilan Joint Community College District may nominate a business, individual, or organization for all they do that c 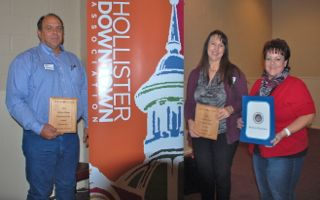 Nominations are open now through Friday, Aug. 29 for the 2014 Gavilan College Community Spirit Awards. Anyone  who lives or works in the Gavilan Joint Community College District may nominate a business, individual, or organization for all they do that contributes to the quality of life in our communities.

Each year, three sets of awards are presented, for the communities of Morgan Hill, Gilroy, and San Benito County. In each community an individual, a business, and a non-profit organization are selected for their history of service, their impact on the community, and the inspiration they provide to others.

They were awarded because:

DENNIS OSORIO has been a valuable volunteer for San Benito County’s event sound systems and entertainment systems for many, many years. He serves on the Hollister Downtown Association’s Lights On Celebration and Street Festival & Car Show committees. For the parade he sets up and takes down equipment, and provides labor to furnish tow announcer stages along the parade route. One year he had to water-proof everything due to the rain! For the street fair his secures the equipment, accessories, and stages AND arranges for 4-5 professional bands. Dennis repeats this donation of his time, service, and equipment for the two City of Hollister Air Shows too. Her also serves on the Airport Advisory Commission. Dennis is nominated due to his overwhelming generosity with “service to his community” his motivation to help where ha can and all with a smile!

SAN BENITO STAGE COMPANY was founded in 1999 as a non-profit performing arts association dedicated to producing local musical and theatrical workshops, plays, and performances. Its goal is to provide high-quality live entertainment for the entire community of San Benito County, while developing performing arts skills for its members. The San Benito Stage Company (SBSC) is a non-profit organization that not only builds character but also fosters creativity and self esteem while developing performing art skills for individuals of all ages. It strives to bring "a little slice of Broadway" to Hollister. For many families, this is their best opportunity to attend a theatrical production. Their 2013-2014 season will include the teen musical “Changing Minds," the comedy dinner theater production “Harvey”, the Spring youth musical “Anne of Green Gables” and a summer family musical production of “Les Miserables.”

TONASCIA FARMS is a local business growing organic spring mix, and cilantro and conventional garlic and peppers. They use sustainable growing practices such as crop rotation, water management, minimal use of synthetic fertilizers, and crop protection tools; all in order to pass their ground on to the next generation in a fertile and productive condition. They are generous in their community support, donating to 4-H, the FFA, Chamberlain's, the Circle of Friends at San Benito High School, Baler athletics and Gavilan College volleyball.