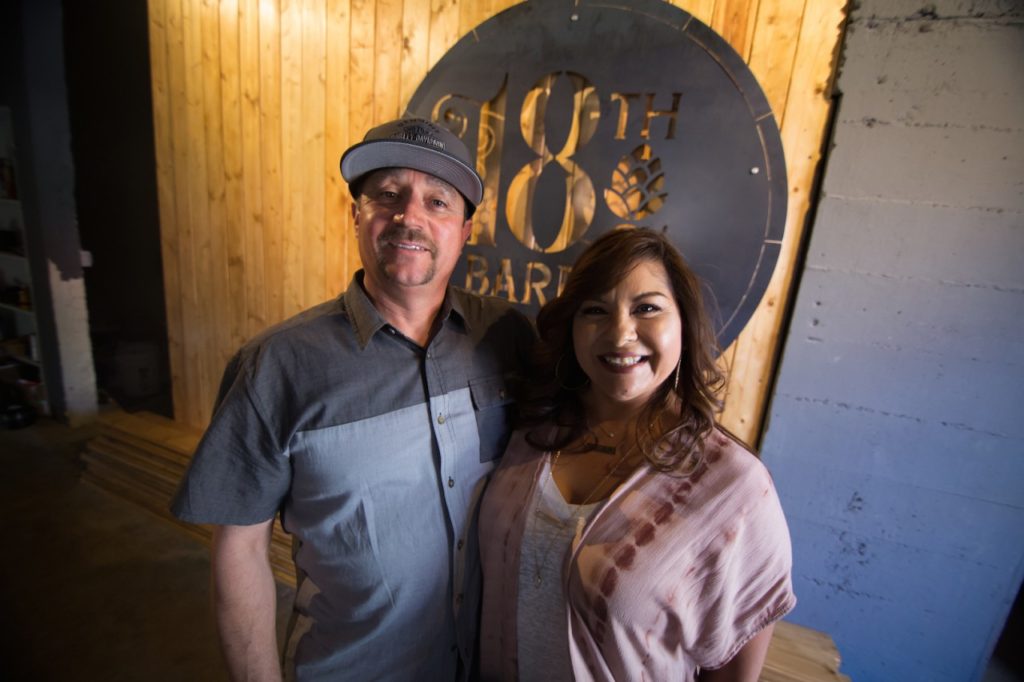 For one Hollister resident, 18 is more than just a number. Feb. 18 marks her birthday. She and her husband, Anthony, celebrate their wedding anniversary on Nov. 18 (she was 18 years old when he proposed). There are 18 letters in her full name: Monica Lopez Ramirez. And on June 18, a long-awaited dream will be fulfilled when her first customer steps into the 18th Barrel, a new wine and beer tasting room in San Juan Bautista.

At an unfinished counter smelling of fresh, cut wood and seated on rustic, red bar stools just unpacked from their boxes, Monica and Anthony took time away from another of their 16-hour days to speak to BenitoLink about the soon-to-be opened business at 322 Third St.

Monica explained that her four-year stint as the tasting room manager at Fortino Winery in Gilroy “planted the seed” for her new endeavor.

An eager student of the winery’s owner and vintner, Gino Fortino, Ramirez soaked up as much as she could about the industry.

She learned about vineyard maintenance, stained her feet while stomping grapes, and trained her palette to distinguish between the various flavors residing in Fortino’s, award-winning bottles of cabernet sauvignon.

Ramirez also made astute observations, such as noticing how married couples entered the tasting room holding hands but soon parted ways: the wife cheerfully walking toward the counter to enjoy a flight of wine, while the husband sulked towards a glass refrigerator to grab a cold beer.

It was while watching this display that Ramirez conceived the 18th Barrel, as a place where couples could “meet in the middle” and “taste the best of both barrels.”

Ramirez shared the idea with her husband.

As he listened to his wife, Anthony recalled Monica’s unconditional support for him the over years, especially the lean times at DBA Electric, Inc. and DBA Alarm & Security, Inc., the two, Salinas-based businesses that the couple co-owns.

A trip to Tuscany’s centuries-old vineyards last year convinced Anthony of his wife’s passion, while cementing Monica’s determination to make her dream a reality.

“It was scary,” Monica said about the decision to plunge into this new venture.

From the outset, Monica decided the mission town would be the perfect location for her future tasting room.

She explained that San Juan’s charm and quaintness reminded her of Murphys, Calif.—a small community nestled in the Sierras that boasts over 20 wineries, many with tasting rooms that line its main thoroughfare, according to the website, visitmurphys.com.

The building on Third Street in San Juan became available a few months after Ramirez began her search for the 18th Barrel’s home.

But after signing the lease, weeks passed before the Ramirezes were able to start renovations.

Since April, the couple and their families have worked nearly around-the-clock, transforming the former Donkey Deli into wine and beer tasting room.

On the day Monica and Anthony were interviewed by BenitoLink, Anthony’s brother, Marcos Ramirez, was busy caulking windows.

And the Ramirez’s youngest child, Kayla, was carefully stenciling letters onto signage.

“It makes me appreciate my family,” the 20 year old said about the effort to fulfill her mother’s dream, adding, “The hours that they [her family] have sacrificed has made this hard and stressful process a lot easier.”

Standing near the intersection of Third and Polk streets and directly across from the San Juan Bakery & Grocery, the 18th Barrel is housed in a freshly-painted, gray building accentuated with red window sills and doors.

A wrought-iron hanging sign bearing the business’s signature logo (the number 18 balancing bunches of grapes and hops) extends from the rooftop. And a striped, bistro-style awning adorns its facade.

An industrial-inspired interior is divided by concrete columns, separating the wine counter on the left from its beer counterpart on the right.

Customers will have the option of choosing between eighteen bottles of wine and an equal number beers.

“We will showcase small, family owned breweries and wineries throughout California,” Monica said.

Hermitage (San Jose), Kaweah (Tulare) and Discretion (Santa Cruz) are among the breweries whose product will pour from the 18th Barrel’s taps, while reds and whites from Fortino Winery (Gilroy), Guerra Cellars (Hollister), and Vino Vargas (Paso Robles) will fill its wine glasses.

Each month a different region of the state will be chosen for tasting, Ramirez explained.

A courtyard with round, picnic tables adjoins the tasting room. On Fri. and Sat. evenings, the 4,000 square foot outdoor space will host food vendors and live music. Eventually, a permanent pizza oven will be installed, allowing for those under 21 years of age to enter the premises.

“I want to bring more awareness to San Juan,” she said.

And she is already considering ways to cross-market with local businesses, like offering coupons with the purchase of bottles of wine that let customers avoid paying corkage fees when visiting their favorite San Juan restaurant.

Gearing up for the 18th Barrel’s opening has left Ramirez breathless at times.

And she admitted that there is still much to learn.

Indeed, before their sit-down with BenitoLink, she and Anthony spent two days at “beer camp,” familiarizing themselves with the new trends in ales, pilsners, and stouts.

In addition to her family, Monica has received lots of encouragement and guidance from others, including San Juan city officials, business owners, and private citizens.

“The whole community has been very supportive,” she said.

Besides running water, what else does she hope for on Sunday, June 18?

Whether her first patron is a wine or beer enthusiast, Ramirez wants that person to feel welcomed and to enjoy what the 18th Barrel has to offer.

And when that customer exits?

“I would like them to leave with the thought of, ‘I will definitely come back!’, Ramirez said.