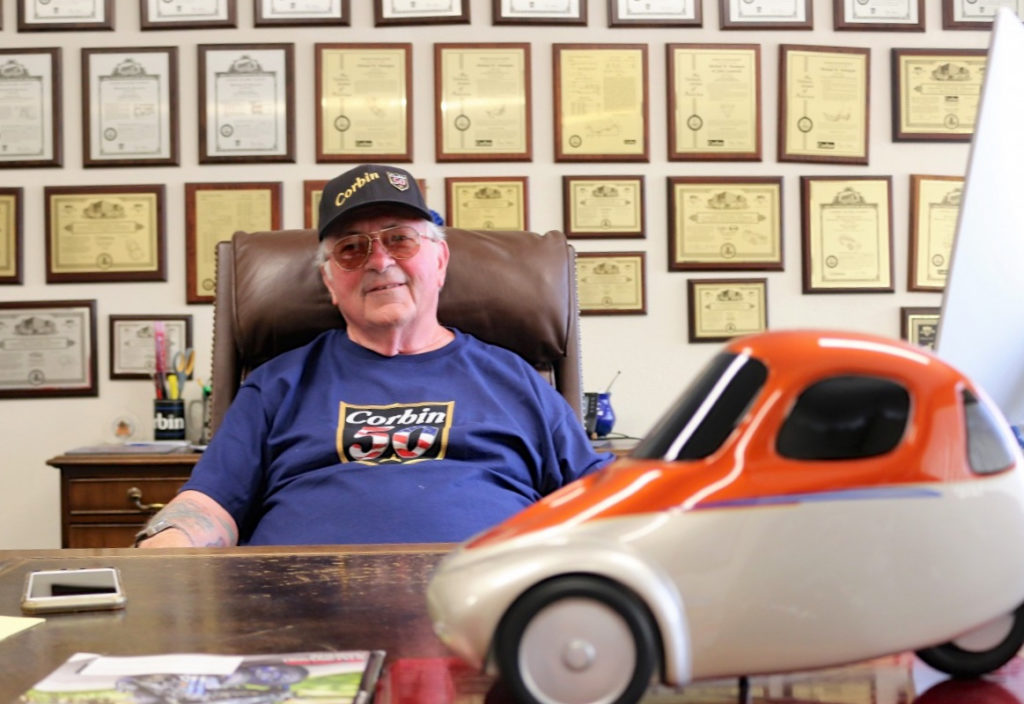 Mike Corbin is hopeful there will be a sanctioned 2019 rally, but in any case, will still have his own event. Photos by John Chadwell. There may not have been a sanctioned Hollister Independence Day Rally this year, but the rumble of Harley-Davidsons was still heard as bikers passed through downtown on their way out to the unsanctioned Rebel Rally taking place at Corbin Motorcycle Seats and Accessories as part of its 50th anniversary celebration.

The three-day event ran from July 4–7, and it’s estimated nearly 5,000 motorcycle fans showed up. The bash was heralded as a birthday party where every rider is invited to Hollister, “the birthplace of the American biker.” The irony, of course, was bikers still came, still partied, and still spent their money—just not downtown.

Along with the cacophony of loud music and the rumble of motorcycles, there was quiet talk going on about a sanctioned rally in 2019.

The two men doing the talking—Mike Corbin and Brian Holt—believe they are capable of pulling it off. Corbin, who was instrumental in organizing the first rally in 1997, is an icon in the biker world. Holt, owner of Official Gear Co. in Ormond Beach, Florida, along with a couple other backers, has the quarter-million dollars or so needed to pay for it. Both said they know how to do it, if only someone can convince the Hollister City Council to green light the rally by August.

In a 3-2 vote, the council canceled the 2018 rally in March. In April, Corbin, Peter Lago—the new owner of Johnny’s Bar and Grill—and a couple dozen other supporters tried to convince at least one of the three dissenting council members—Karson Klauer, Mickie Luna, or Jim Gillio—to let them team up with Holt and a local nonprofit to do just that. None of the three, however, were at the April meeting and the event withered away almost unnoticed.

According to City Manager Bill Avera, the crux of the problem was and continues to be a lack of workers’ compensation insurance for outside law enforcement needed for security. Hollister Mayor Ignacio Velazquez, an unwavering proponent of the rally, said Avera is wrong, but hedged a bit when asked if he knew for certain what workers’ comp covered.

Velazquez suggested an expert should speak to the council so there would be no ambiguity.

“Most of the people involved don’t understand how workman’s comp really works,” he said. “I believe [police] are covered. But nobody knows 100 percent, one way or the other, and that’s the problem.”

The mayor said it’s Avera’s responsibility to know how much and what type of insurance Hollister has, regardless of whether there is a rally. Avera, however, told BenitoLink on July 9, “Workers’ comp isn’t rocket science,” adding that the mayor doesn’t want to understand how it works because “he wants the rally to take place, and purposely makes it as confusing as possible.”

Avera said no city that agrees to lend out officers for the rally will provide workers’ comp insurance for them.

“What’s covering them is our general fund,” he said. “This is what nobody seems to understand. There isn’t an insurance company that will take on the workers’ comp risk at a motorcycle event because [claims] can be either very small or devastating in cost. Because of the workers’ comp law in the public sector, which needs to be overhauled, there’s no incentive for [officers] to get back to work.”

Avera further explained the city has general liability insurance to cover people who may be injured or if there’s property damage at an event, such as the Farmers’ Market, a car show, or motorcycle rally, but that is different from workers’ comp, which only applies to public sector employees, including law enforcement officers.

Past rallies have taken place, according to Avera, only because “We had a council that wanted to have this event and were willing to take that risk. Everybody just said, ‘We need cops because we need to be protected.’ At some point, the cops need to be protected, as well. We started trying to figure out how is this ever going to work. It doesn’t.”

Avera said he told the council the city has worked hard to have $5 million to $6 million in the general fund, and asked them if they really wanted to see it go away because of a workers’ comp claim for long-term care because a police officer was injured. If that were to happen, Avera said, “We own it forever.”

Ideally, Hollister Police Chief David Westrick told BenitoLink by phone and text on July 11, he would like to have been in discussions about a 2019 rally last fall. That not having happened, he said it needs to by August or September at the latest. He said it’s insane if talks were to be delayed until January, as has happened in the past.

Regarding workers’ comp, Westrick said public safety employees are covered by California Labor Code 4850, which makes Hollister responsible for any liability should an officer be injured. He wrote in a text, “…the city cannot hire officers as individual contractors without backgrounding them, including medical exams and polygraphs, which would be incredibly expensive and time-consuming.”

He went on, “We contract public safety agencies that certify the public safety personnel have already gone through this process. The issue that comes up is that insurance companies do not want to cover the liability of workers’ compensation for the event.”

Westrick said every year he tells the city’s risk management that the city will be liable for any injuries to outside public safety personnel.

“Each year, they tell City Council there’s no coverage,” he said. “It’s a huge risk, but that’s not in my purview.”

Even so, Avera thinks a 2019 rally will take place.

“I think there absolutely will be a rally,” he said. “It can also depend on the election and that’s probably why they want to get something done earlier. If four [council members] are firm supporters of the rally, then it’s easy.”

For the first time, at least in recent history, five council seats will be open: Gillio, who will be running for county supervisor against incumbent Jerry Muenzer in November, with Luna and Velazquez expected to run for re-election. Klauer has stated he does not intend to run for re-election this year, and Councilman Ray Friend confirmed by text July 12. that he will be departing the council on Aug. 7. The council will have to appoint someone to take his place for the next two years. Resident Marty Richman just announced he is running for Gillio’s soon-to-be vacant seat. In the past, Richman has been against the rally because of the workers’ comp issue. Only Velazquez and Friend have never wavered in their support for the rally.

Avera said if Holt or any other person told him they had formed a 501(c)(3) nonprofit to run the rally and requested he put it on the agenda, he would. Then it would be up to the council to determine if there would be a rally in 2019.

For his part, Klauer, who will still be on the council if a rally is placed on a 2018 agenda, said that in the past he voted against it because of his understanding of workers’ comp as Avera explained it to him. He said he would be willing to put it on the agenda, but is still concerned.

“If we can sort out the workers’ comp part of it, I don’t have any problem bringing it back and talking about it,” Klauer said. “The agreements we have with outside agencies say they’re not taking on the liability. Somebody has got to be on the hook for it.”

Learn from other cities

Rally backer Holt said he has watched every council meeting dealing with rallies at which Avera, Chief Westrick, and Richman all explained ad nauseam that the city could be bankrupted by a workers’ comp claim. Holt added that there are rallies all around the country run by municipalities and thinks Avera needs to talk to them to find out how they manage their events.

“The mixed message the city has put out over the last 20 years has driven away the major players and sponsors,” Holt said. “It’s a shame what they’ve done, but we’ve proved [at the Corbin event] there doesn’t need to be a sanctioned rally.”

Holt said a nonprofit needs to take the lead in going to the city and that before any major sponsors will sign on there has to be a four- or five-year contract between the city and the nonprofit. Westrick agreed with this because downtown facilities, such as the Veterans Memorial Building, are already being reserved a year or more ahead of events.

Avera said that would not be a problem, pointing out that the city has had five-year contracts with the Hollister Downtown Association.

Holt mentioned that Mark Scherer, an American Legion Post 69 member and president of its Legion Riders group, approached Avera in April and then Holt and Corbin about running the 2018 rally. Scherer told BenitoLink on July 11 he will be presenting a proposal to Legion membership that they take on the nonprofit role. If they approve the project, Scherer will then go to the city.

Holt told Scherer in April that he could pull enough money together to back the 2018 rally. Now that Scherer is thinking about 2019, Holt said if he is successful in getting the city’s approval, he is prepared to help bring money to the table. He said if there is a consistent marketing message that the rally is on, people will come.

Corbin conceded the rally is important to his business and that he needs to concentrate on running it rather than talking to politicians. He said the biggest problem in trying to work with the Hollister City Council is its inability to commit in August to having a rally. He said this is unfortunate because there are more than one million motorcyclists within a day’s ride from Hollister. He added that when bikers leave the Sturgis rally in South Dakota, they’re already thinking about coming back the next year.

“July 4 is not a vacation ride; it’s a holiday weekend ride for them,” Corbin said. “Most think they’ll ride to Hollister, buy a t-shirt, check out all the bikes, go home, and have a barbeque on Sunday with family. The uncertainty has always been in place with Hollister. Even though they’re not losing money, they’ve never wrapped their arms around it. The rally is probably the only event they have that at least breaks even.”

Corbin said a few entrepreneurs can’t make the rally happen, adding that Holt has the money and is ready to move forward. But it’s up to the City Council because, Corbin said, “They own the town.”