Community FoodBank of San Benito's Maria Thomas thanks Ian Slattery and Eugenia Renteria both from CMAP-TV. Thomas gives a certificate of appreciation to Corbin's Bev Hannegan. Krystal Lomanto receives thanks for Rotary Club of Hollister from Thomas. Gary Byrne receives a certificate from Kuerschner. The Community Foundation for San Benito County was a Community Partner for the local fundraising campaign. 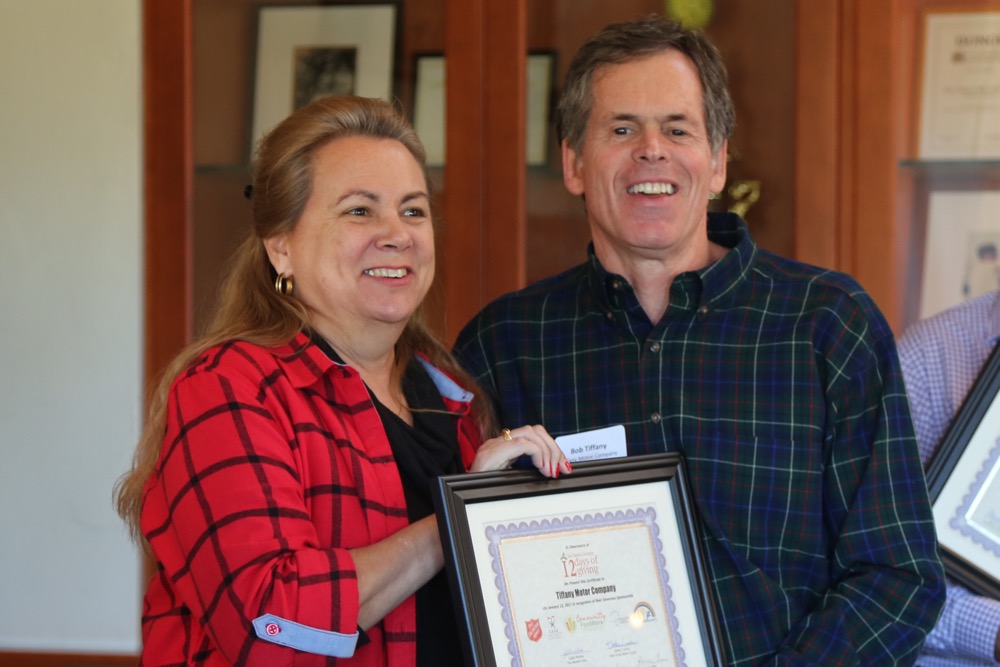 The nonprofits involved in the “12 Days of Giving” campaign closed out their 2016 fundraising event by providing an intimate luncheon for their sponsors Friday, Jan. 13. Gary Byrne, Community Foundation for San Benito County president, proudly announced the annual fundraiser brought in $128,500 this year and a total of $348,000 since the program began five years ago.

Bob Tiffany, owner of Tiffany Motors, was introduced as the originator of the 12 Days fundraising concept. Tiffany realized several years ago that much of the year-end fundraising effort was benefiting nonprofits and communities outside the county. He wanted to bring the gifts and fruit of the fundraising efforts back to San Benito County nonprofits.

Five lucky nonprofits were selected for this successful event because they provide basic human services, particularly for youth and families. Major sponsors this year were Tiffany Motors, Teknova, Rotary Club of Hollister, Recology, True Leaf Farms, Pierce Real Estate and the City of Hollister. Supporters, who put up less than sponsors but still sizable amounts were Corbin, Earthbound Farm, Grocery Outlet and Greenwood Chevrolet. CMAP-TV was also credited for a donation in-kind.

United Way was brought in to the organizational side of 12 Days and its popular “Gala” event was added. Vicki Fortino with United Way of San Benito County said, “I really loved the collaboration on this. Many of the nonprofits involved, we already work with regularly and they are the people doing the best work in our county.”

When asked by a sponsor about how to judge what would be considered excessive administrative fees and high overhead, Byrne stated, “We have vetted these organizations and the money goes where they say it goes.”

Esther Curtice with CASA (Court Appointed Special Advocates) told the group of nonprofits and sponsors that this year’s additional funds helped the her organization hold to their promise of personal holiday gifts for the program’s youth. “But it goes further than that,” Curtice said. “It allows us to send the kids to camps and special programs through the summer.” She shared a story of a young wrestler in the program who needed contact lenses. His type of insurance did not allow for contacts, but he needed them to continue wrestling. CASA was able to purchase the contacts and get him back out on the mat.

Chamberlains interim Executive Director, Patrick Ellis, explained that the foster children living at the Hollister site are away from their families. In fact, often they have been removed from their families because of a trauma that occurred at home.

“They don’t have the same experience over the holidays that many of us have,” Ellis said. The funds gathered through 12 Days of Giving helped some of the students join their families while other funds were used to make sure the children got “gifts, love and food” to make their holidays bright, too.

Community FoodBank of San Benito County is also one of the five nonprofits providing essential services in the county. Maria Thomas told the group, “5,000 people participate in our food program every month. That’s about 10 percent of our county.”  She explained that the Food Bank is focused on making sure families are eating healthy, fresh food. Thomas shared a letter from a local mother who wrote, "My family has been struggling for months now on whether we should eat nutritious meals, or pay the bills on time." Natalie, the mother, showed her appreciation for the healthy food she got at the food bank and wrote, "It's now Monday and this is the first week in a while that I'm not stressed about food."

Patrice Kuerschner, executive director of Emmaus House, a shelter for women trying to escape domestic violence and sexual assault, thanked the sponsors directly for giving the seed donations that make the 12 Days of Giving fundraiser so successful. She said the funds allowed Emmaus to give families going through trauma over the holidays meaningful gifts that helped them settle in.

“We gave them something essential, something off their wish list that we could afford and something fun.” Kuerschner explained the addition funding that comes without attachments, “helps tide us through the whole year.”

Finally, Caleb Montes with the Salvation Army told the guests that the nonprofit is a place people can stop in and ask for help. He said they were able to provide toys, food and even information about jobs over the holidays. He mentioned that http://www.chispahousing.orgCHISPA low-income housing will be coming to the same neighborhood as the Salvation Army and that he looks forward to serving the needs of this group as well.

Although it is a national organization, United Way, which is a partner with the Community Foundation on the 12 Days of Giving, keeps all of the funds in San Benito County. Byrne explained to the sponsors that, as a rule of thumb,15 percent and under is considered an acceptable amount of overhead to expect out of a nonprofit. He mentioned the Community Foundation had also absorbed the costs of the use of credit cards by donors as another way of contributing to the cause.

Not present were: True Leaf Farms, Pierce Real Estate, and the City of Hollister

Editor's note: Headline was incorrect and has been changed. The 12 Days of Giving campaign has gathered a total of $348,000 over five years, since its inception.  In 2016, 128,500 was raised. Our apologies for the error.