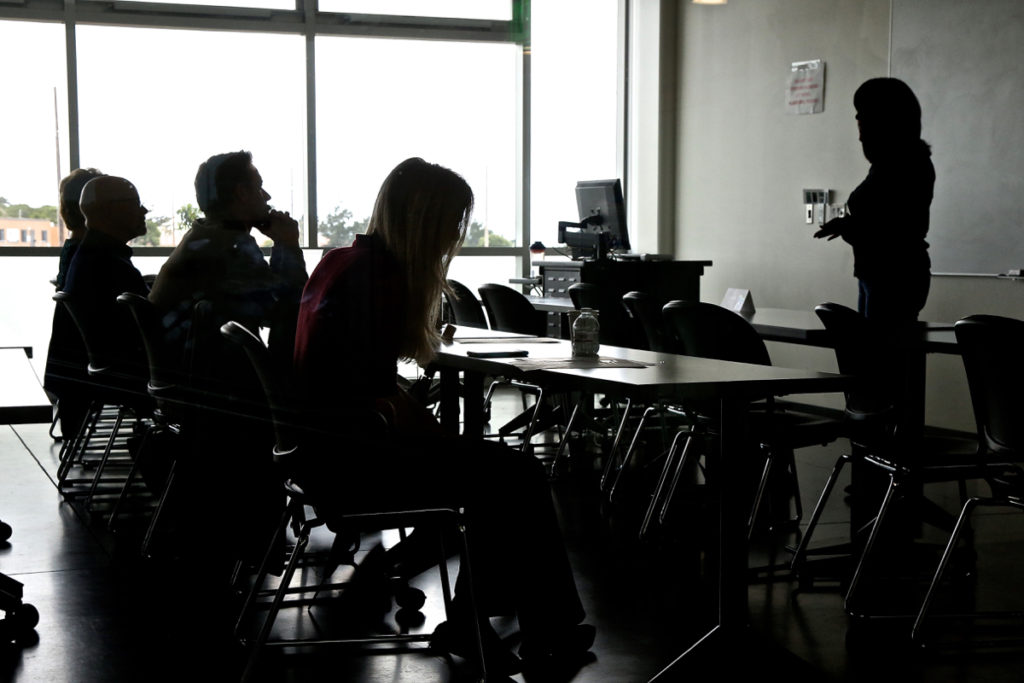 Doty talks garlic to the three judges and timer What do garlic sauce, an entrepreneur’s platform, Hawaiian Shave Ice and a multi-disciplinary arts facility have in common?

San Benito County was well represented at the qualifying round for the Startup Challenge Monterey Bay April 8. After being provided training by the Startup Challenge, participants were required to give a five minute “pitch” describing their business idea. One “Venture” startup from the county was chosen and three smaller businesses or “Main Street” startups were also selected.

Hollister resident Salvador Ornelas-Reynoso and his team are finalists in the Venture category for their project “Workinspot”. His group has a chance to win $20,000 in the Startup Challenge.

“It’s exciting,” the Hollister resident and Cal State University Monterey Bay student admitted. He explained that Workinspot is a business idea that would provide entrepreneurs with affordable, convenient and flexible working space.

Salvador said, ” “It is a platform. The website is currently being developed and we would look toward creating an app for it eventually”

He told Benitolink,“They liked the simplicity of it. It is kind of a twist on the co-working idea.”

Salvador Ornelas-Reynoso grew up in Hollister and went to San Benito High School. He is currently a student at CSUMB and is going to the College of Business, majoring in Business Administration with a concentration on entrepreneurship. The Workinspot group is made up of Salvador, another student and three other team members. Salvador says if his team wins, they will put the $20,000 prize money toward the business so that it can grow to fruition. “Our priority is seeing this through,” he said.

Holding a bright colored sign, Peter and Karina Hernandez waited patiently Saturday for their turn to present their pitch in the Main Street division. Their product was Ohana Shave Ice which they started selling at the Hollister Farmer’s Market in 2015. Peter and Karina live in Hollister and together they are “bringing the flavors of the islands to the mainland.”

The idea struck when they bought shave ice from a catering truck in Hawaii. “As soon as we sat down after ordering our first shave ice, we couldn’t help but sense an epiphany moment about how simple yet wonderful the shave ice experience could be,” they told the judges.

Peter and Karina came home and got started selling at local events, farmer’s markets and days at the park. Peter and Karina tripled their sales by the second year. In his pitch, Peter described some of the key ingredients that make their shave ice unique, “Hawaii’s Lappert’s premium ice cream, tart and tangy li hing mui powder, and the all famous snow cap which gives the ice the look of the island snow.”

If Peter and Karina win the Challenge, they say they might get a fixed location where they can provide their treats and they are thinking about marketing custom made apparel with their “Ohana girl” mascot.

Michelle Doty’s “that garlic stuff” was also selected for the Main Street division. Doty explained to the judges how she accidently came up with her Startup Challenge product. It started at the Hollister Farmer’s Market too, where she sells meatball subs with chips. She told the judges, “We were running low on chips one day so we improvised, grabbed a handful of our nacho chips, set them on the plate, and drizzled a little of our garlic sauce and thought, that’ll work until someone can make a Costco run. Pretty soon, our customers started coming up to the booth asking ‘What is that stuff?’,  ‘What is that garlic stuff?’”, Michelle said.

Michelle said that very quickly people started asking her if they could buy some. “We joked at first, ‘maybe we should bottle it! That’s where the real money is!’” she said jokingly. After enough requests and people remembering her product from year to year, she told her daughter, “That’s it, we’re going to do it.”

Michelle told the judges that her customers have come up with ideas she’d never thought of. “Our customers are using it as a salad dressing, sautéing their veggies, barbecuing with it, on toast and eggs in the morning, even on popcorn with a little parmesan cheese,” she told them.

If she wins the Challenge, Michelle wants to get That Garlic Stuff out to more farmer’s markets in Santa Cruz and Santa Clara Counties. She’s planning on sticking with her home market, Hollister and she’s thinking, maybe she’ll even spring for some advertising.

Credo Studio in San Juan Bautista was Startup Challenge finalist Ramona Hill’s dream. She leased a historic building in downtown San Juan Bautista and is using it for an Art Center that will provide a variety of arts classes, primarily for youth.  She spent three months and family funds to bring the performing arts hall and visual arts workshop to life.

Ramona opened her doors in January with a grand opening and intends to serve San Benito County and northern Monterey County. Ramona explained to the judges that there are few arts facilities and most only focus on one discipline. She said her outreach will also include essentials like after school programming and day camp for kids.

Ramona explained the Credo Studio mission statement to the three Startup Challenge judges. “Credo Studio exists to provide enrichment in the Arts to students of all ages and abilities in order to cultivate a culture of creative community,” she said finishing up her successful pitch. She is already filling her Credo Studios with multiple classes and she’s planning to also offer a performance venue for local artists.

The Monterey Startup Challenge is not just a competition but a training opportunity. The CSUMB business school faculty and entrepreneurial friends provide multiple pitch training workshops that not only run contestants through the agony of their first pitches but also give practical business tips and prepare them for deeper questions about their business plan.

Kristina Chavez Wyatt, with Farmhouse Communications in San Benito County, was one of the Challenge judges and has been involved in the Startup Challenge for several years. “The program provides free workshops, feedback and mentoring to empower entrepreneurs in a competitive process. Locally owned, small businesses are the backbone of our economy,” she said.

The finalists will be competing in the final round on May 12. On the big day, there will be 12 contestants in Venture, eight in Main Street and four in the Student divisions. To learn more, you can visit the Startup Challenge website. The Finalist Exhibit Hall, Otter Tank Competition, award presentation and reception is open to the public. The Challenge is sponsored by the Monterey County Weekly, Fort Ord Reuse Authority, CSUMB, Institute for Innovation and Economic Development, and the Cities of Salinas and Monterey.