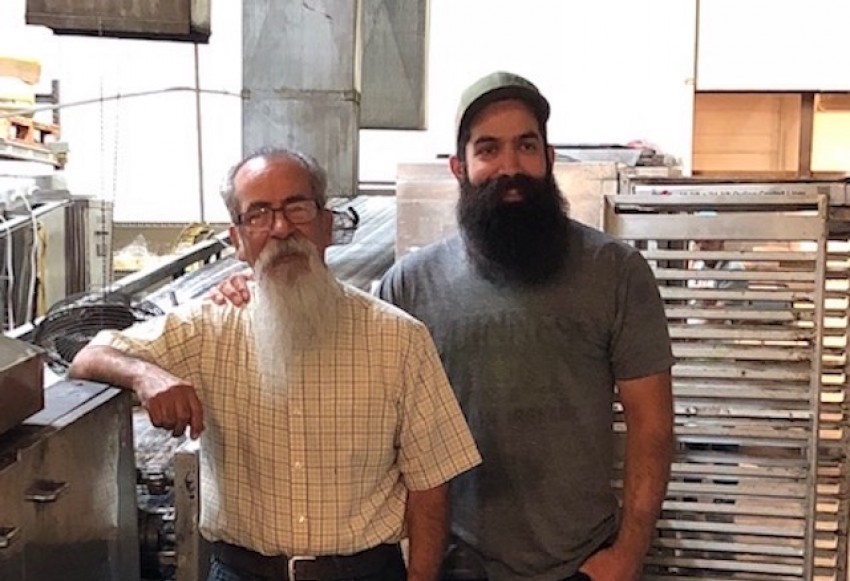 Adolfo Berlanga (left) with his son Frankie. Photo courtesy of the Berlanga family.
×

Adolfo Berlanga was a kind, hard-working man, and his family says his generosity stretched past the walls of El Nopal Bakery.

“He didn’t look like the guy you could approach, but he was,” Frankie Berlanga said about his father.

Following Adolfo’s death at 66 from a heart attack on Nov. 7, the community showed its support by sending messages on social media, placing flowers outside the bakery on Third Street in Hollister and attending his funeral and rosary.

Stories of Adolfo helping others kept surfacing and the Berlanga family learned the extent of Adolfo’s impact in the community.

One such case Frankie heard about recently: when a regular customer died, Adolfo handed the widow an envelope with a considerable amount of money. Adofo asked the widow not to tell anyone because he knew the family’s only income was through the father who had died.

Frankie said the widow, whom he did not want to name, hadn’t told anybody—at Adolfo’s request—until now.

Those fortunate to have crossed paths with Adolfo knew that behind the snow-white beard and stern face, there was a man who saw past the business side of things and focused on the human side.

Al Castañeda, former owner of Doña Esther’s in San Juan Bautista, told BenitoLink he was facing hard times during the recession in 2008. He said he owed Adolfo about six months worth of services totalling about $14,000.

“He told me, ‘Al, don’t worry about it. Am I asking you for it?’” Castañeda said, adding that Adolfo’s understanding of his situation helped keep his business alive.

Frankie said his dad suspected he was going to be drafted to fight in the Vietnam War, so he voluntarily enlisted in the Marines after graduating high school. Adolfo served five years in two tours before opening the bakery with his father in 1975.

Frankie and Cherub said Adolfo never talked about his experiences in the military with his family. Whenever anyone asked about it, Adolfo would say that he went there, looked around and came home and that he was “in the rear with the gear.”

Frankie said his dad had planned to attend college and become a dentist after serving in the Marines. However, his first wife Tomisina was afraid he would cheat on her, Frankie said, and convinced him to become a baker.

At age 23, Adolfo began working in his father Francisco’s El Nopal Bakery in Watsonville and later opened a second location in Hollister.

In a stroke of luck or destiny, after Adolfo and his father toured Hillmar (about 23 miles northeast of Merced) for a new bakery location, they stopped for drinks at Baler Market, where Hollister Super Market now stands on Third Street. They noticed a “For Rent” sign on a dry cleaning facility across the street. After speaking with the owner and receiving a loan of $1,000 from his father, Adolfo brought El Nopal Bakery to Hollister.

Adolfo initially operated the bakery with only one, three-compartment oven that fit six pans at a time. It was similar to what pizza places use. The $300 oven was operational until eight years ago.

He was so dedicated to his craft that he didn’t take a single day off in the first seven years he was in business, according to Frankie. As often as customers saw him smile, Frankie could see the toll the hard work was taking on his father. He said Adolfo did whatever was required at the bakery. Most days it was prep work and baking. Other days it included equipment repair.

Frankie said if something unexpected kept the bakery from running smoothly, Adolfo would complain, then find a solution.

Despite the hard work and long hours, Frankie didn’t think his father regretted being a baker.

“I don’t think being a dentist would have brought him the [same] happiness,” Frankie said.

However, there was something Adolfo was not willing to sacrifice: moments with his two daughters, Renee and Teresa, and his son Frankie.

About 34 years ago, Adolfo and Tomisina divorced.

“Everything was his kids,” said Rhonda Brown, Adolfo’s longtime friend and owner of San Benito Glass. Brown met Adolfo soon after the bakery opened and she developed a relationship with his family. “He was a happy guy if his family was happy. He basically would have moved Earth for his family to be happy.”

“He is a bigger man than, I think, anybody,” Frankie said.

After the divorce, the family of four lived in a trailer parked next to the bakery. Eventually, Adolfo hired a nanny, Blanca, to help with the children. Adolfo and Blanca were married four years later and she too worked at the bakery, helping with customers and bookkeeping.

Growing up, Frankie spent a lot of time at El Nopal Bakery, whether it was doing his chores, doing his homework, or just hanging out. He began to work there part-time while in high school and then took on a full-time position when he dropped out.

“He was always busy in the bakery,” Frankie said of his father. “We never really got to spend a bunch of time together unless it was at the bakery.”

When Adolfo did take leisure time, he liked to fish and participate in car shows.

Frankie recalled that on fishing trips, his father would always fall asleep on the back of his Toyota Celica waiting for bites. Frankie, in an attempt to wake him up, would throw rocks at the line to set off the warning bells they placed on the fishing rods.

“I would think it was the funniest thing ever,” Frankie said. “I would just be laughing and laughing.”

Rhonda Brown said Adolfo was going to retire and move back to Mexico once Frankie got married, but his plans changed when he found out Frankie and Cherub were expecting a child.

Brown said Adolfo walked into her business and told her “I can’t leave the babies.”

“That was his driving force,” Brown said.

Adolfo Berlanga lived a simple, yet extraordinary life. Although he made a comfortable living through his bakery, that was never his goal.

Daily, Adolfo provided two pieces of bread and coffee to members of the transient and homeless community. He also gave tortillas and bread to families who came in during Christmas time asking if they could pay after they found a job. When those customers asked what they owed him, Adolfo would just wave his hand and tell them not to worry about it.

“I don’t think there was anybody he didn’t help,” Brown said.

Frankie felt Adolfo’s character did not allow him to turn away those who asked for help. It also did not allow him to badmouth anyone, especially those who were in the baking industry. Adolfo had told Frankie that it was important not to criticize other baking businesses because there were people who depended on it to provide for their families.

Both Castañeda and Brown said it was difficult to find people who respected others as much as Adolfo did.

“We will miss him,” Castañeda said, “because he was a real gentlemen.”

Looking back on Adolfo’s journey, Frankie said working with his dad was the best choice he made growing up.

“I didn’t care what we were doing, it was just being with him.”