‘The Turkey Bowl’ pays homage to local rivalry and players. 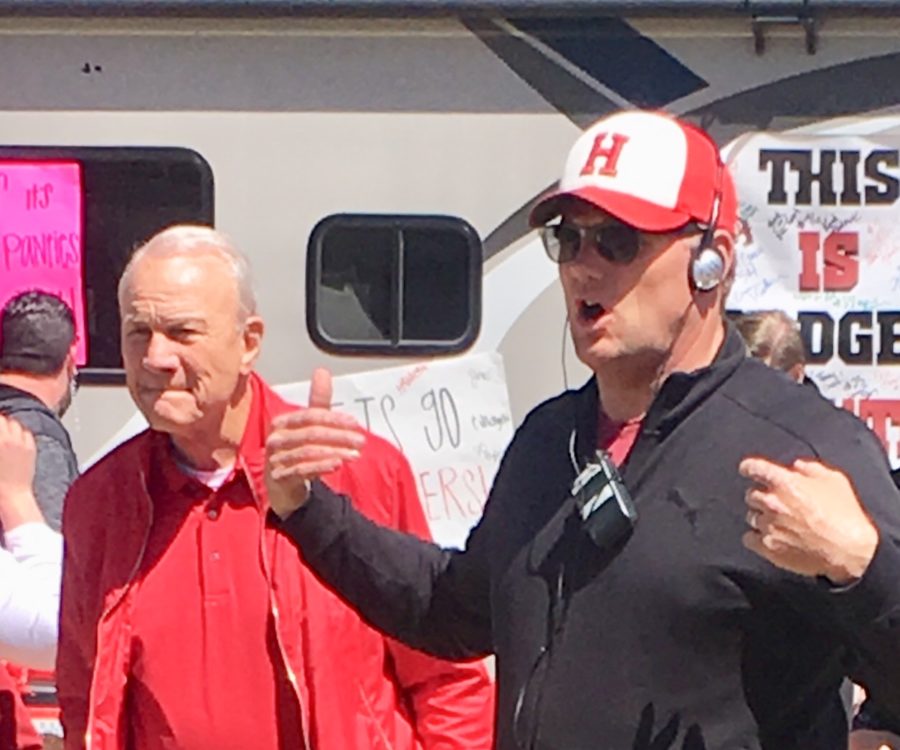 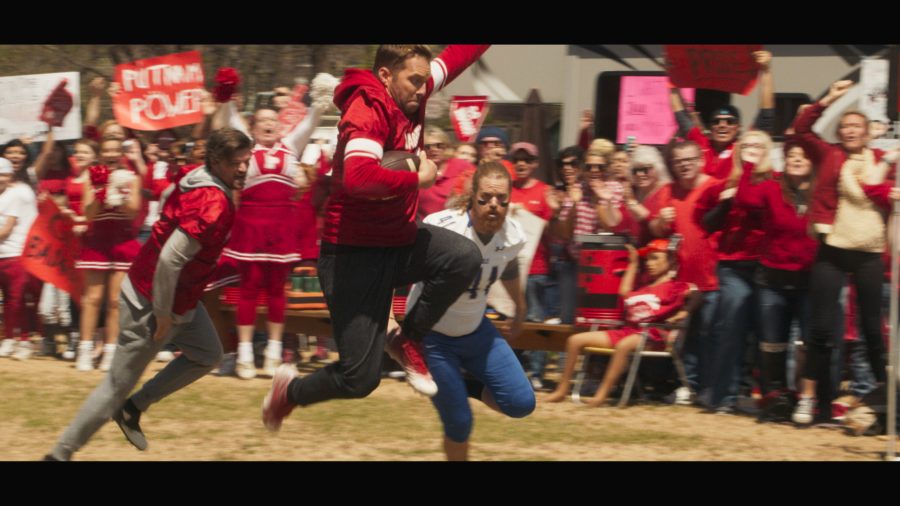 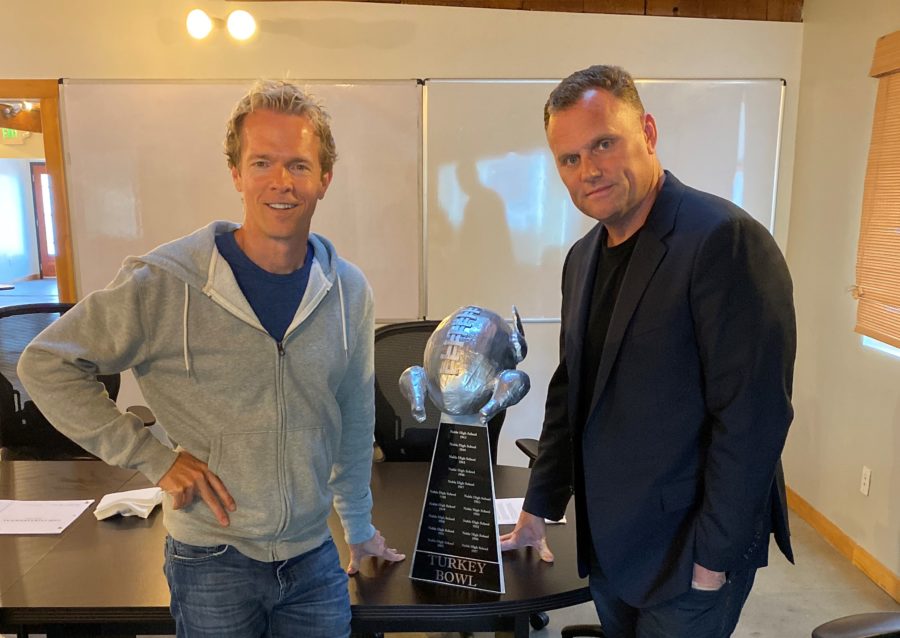 Greg Coolidge and Kirk Ward with the Turkey Bowl trophy from the movie. Photo provided. 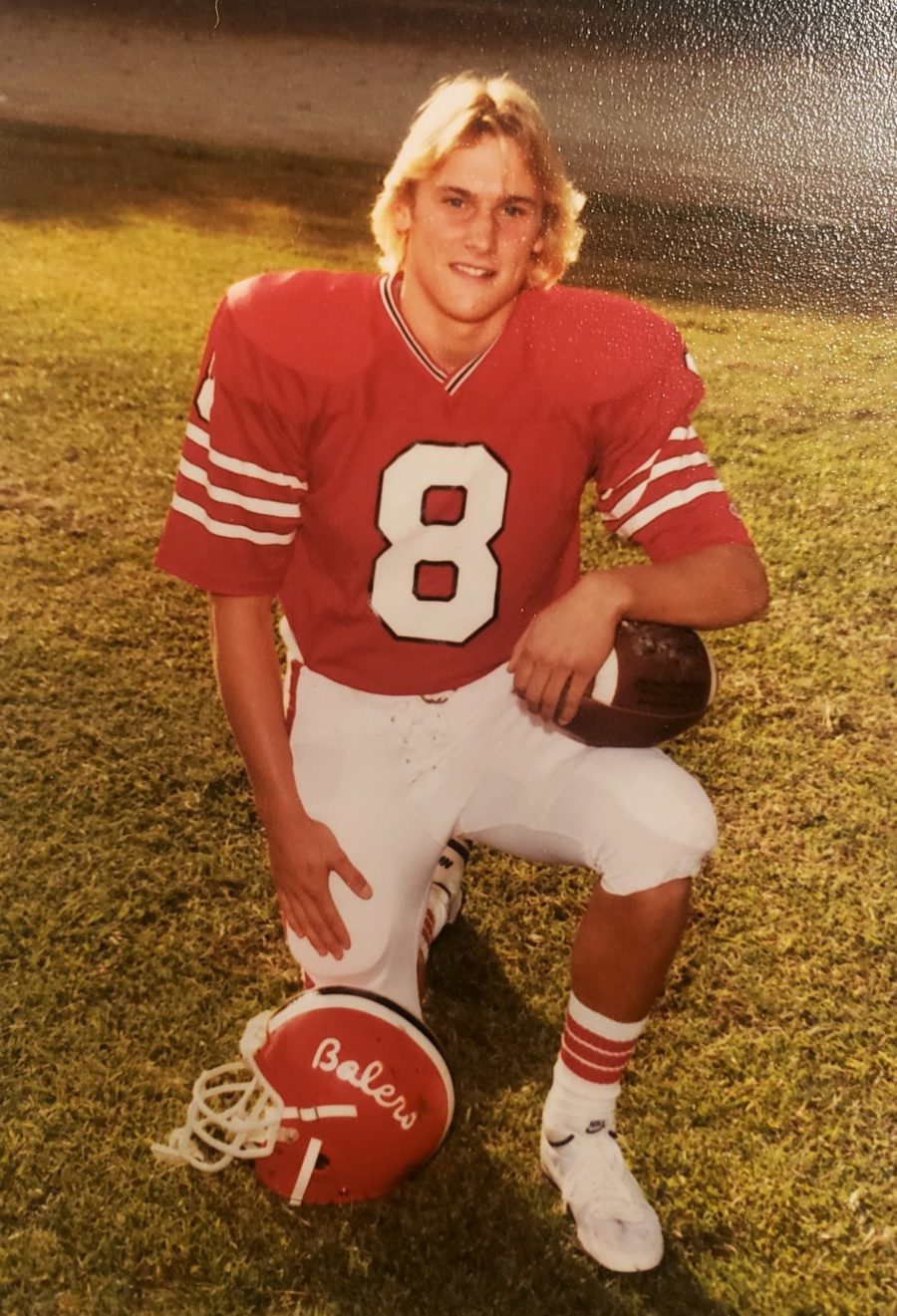 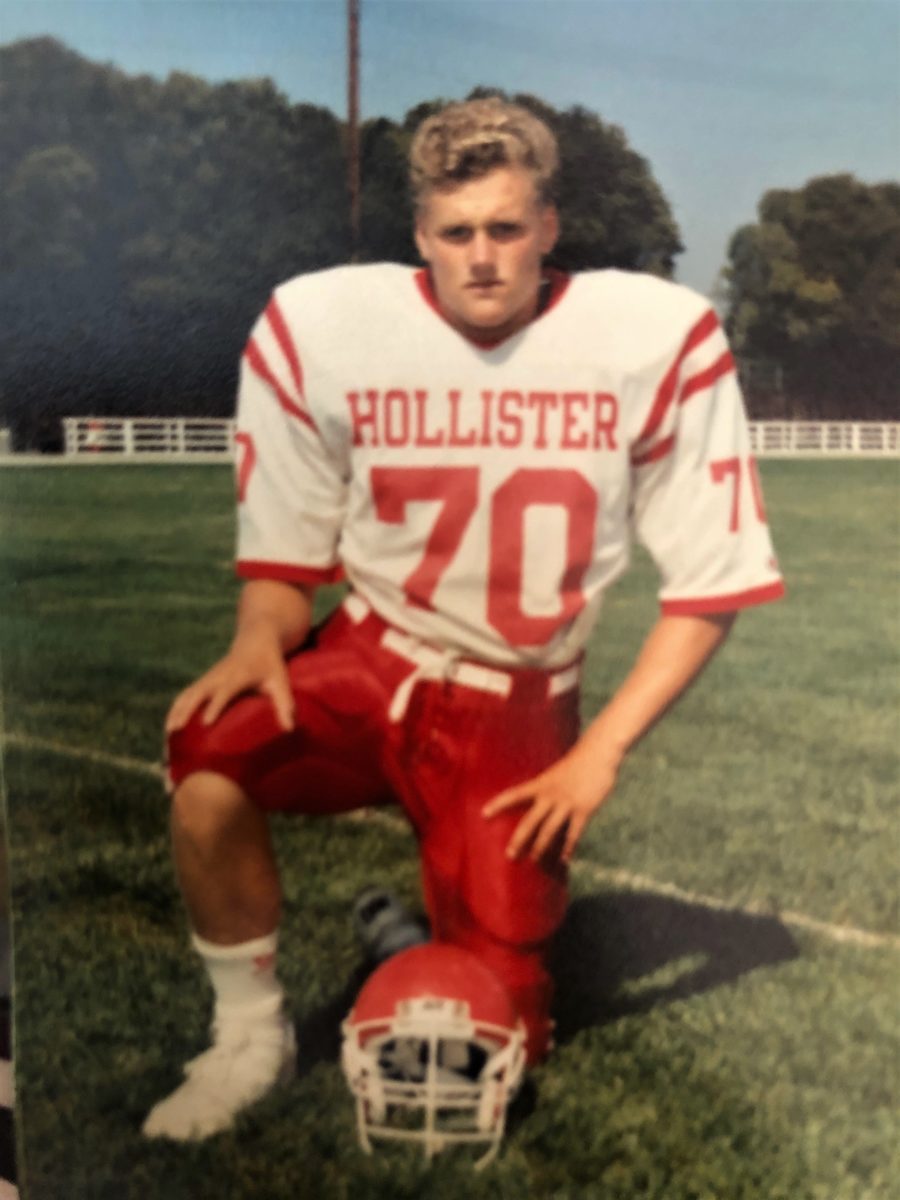 Kirk Ward said he played in the shadow of his brother, Kip. but was a champion in his own right. Kirk Ward photo. 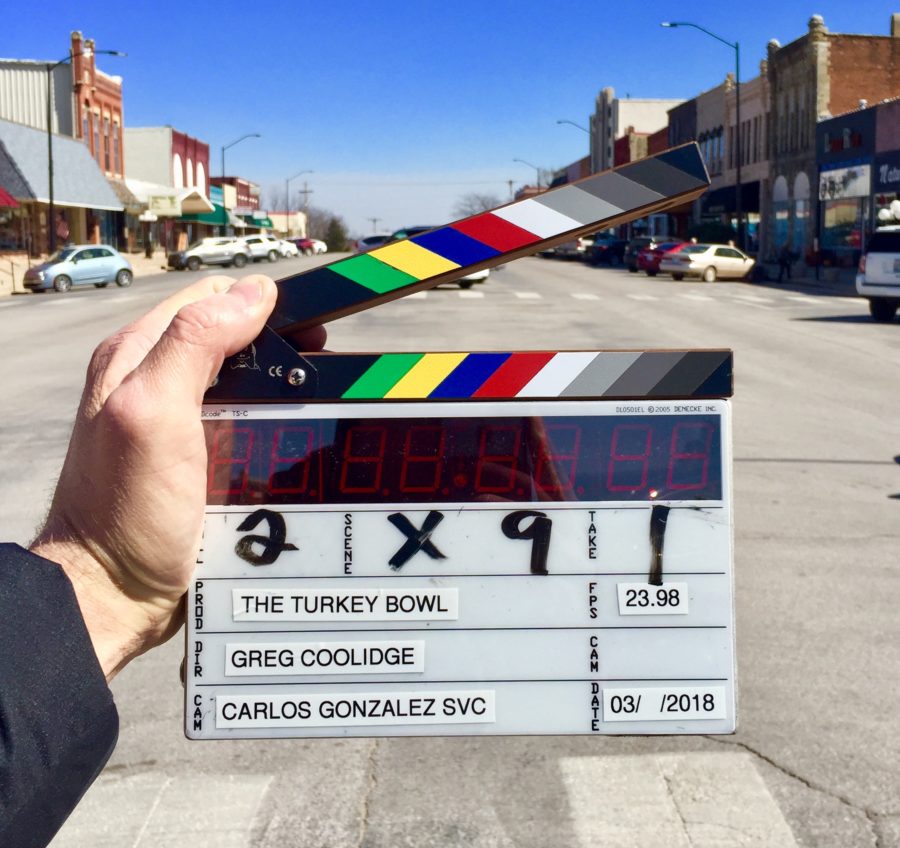 Norman, Oklahoma was the location for shooting The Turkey Bowl. Lionsgate photo. 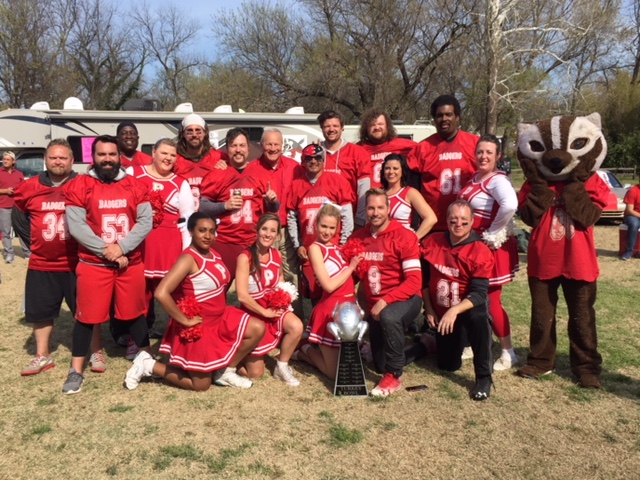 The Badger team from The Turkey Bowl. Lionsgate photo. 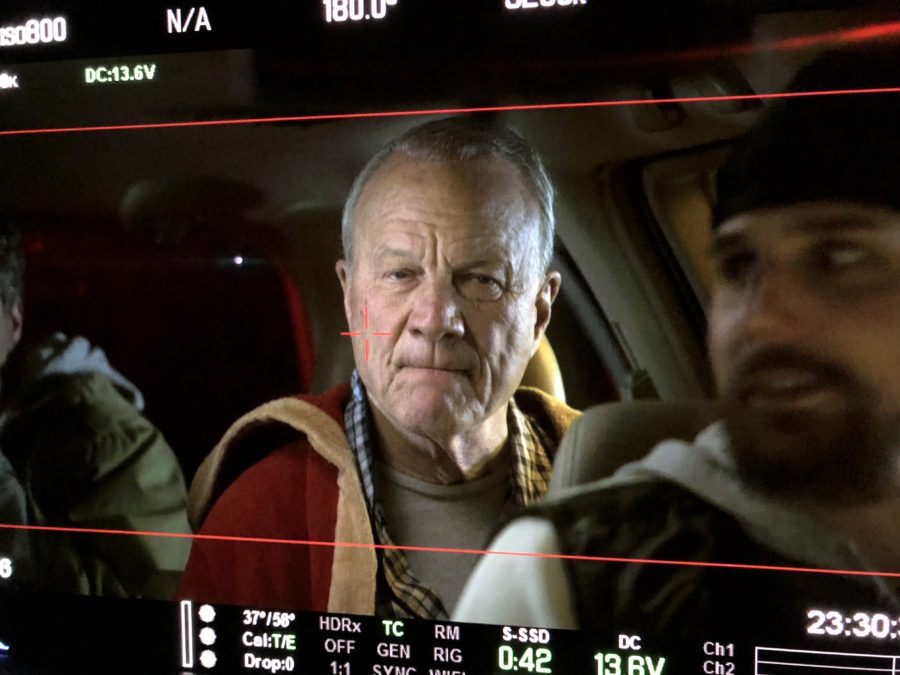 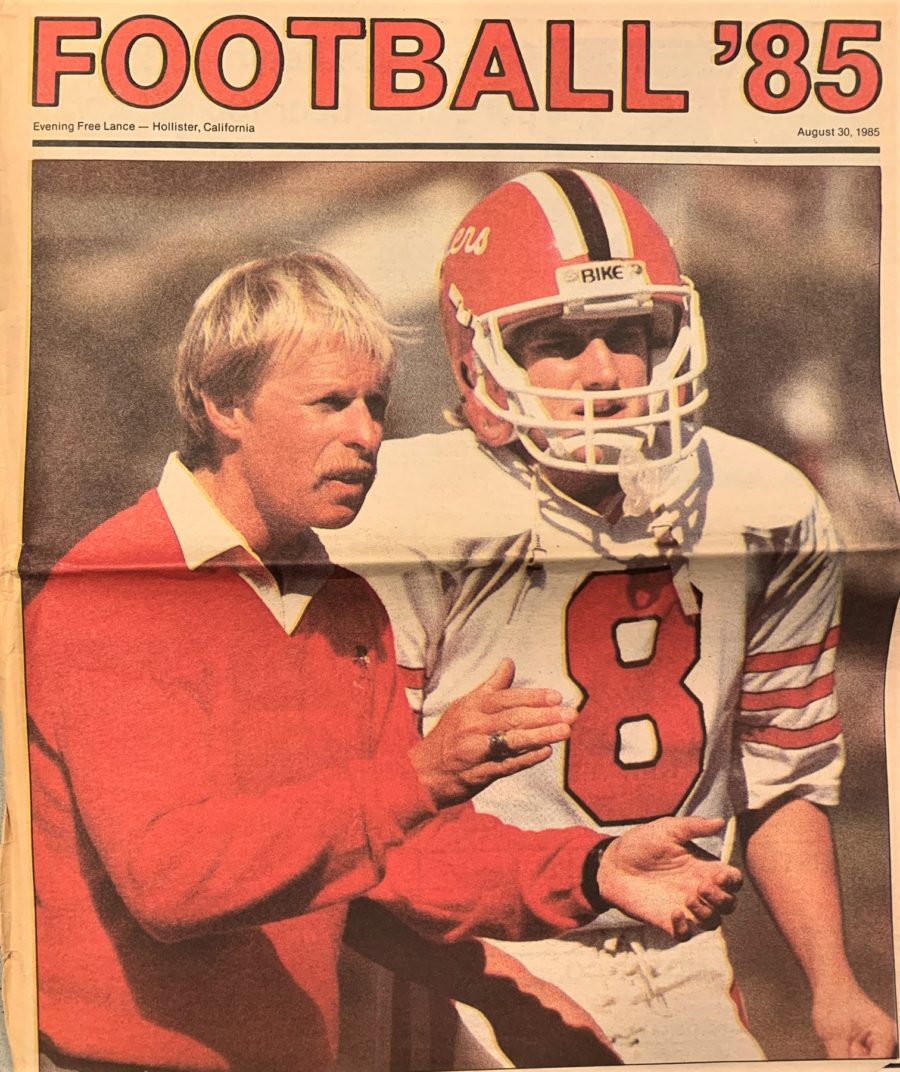 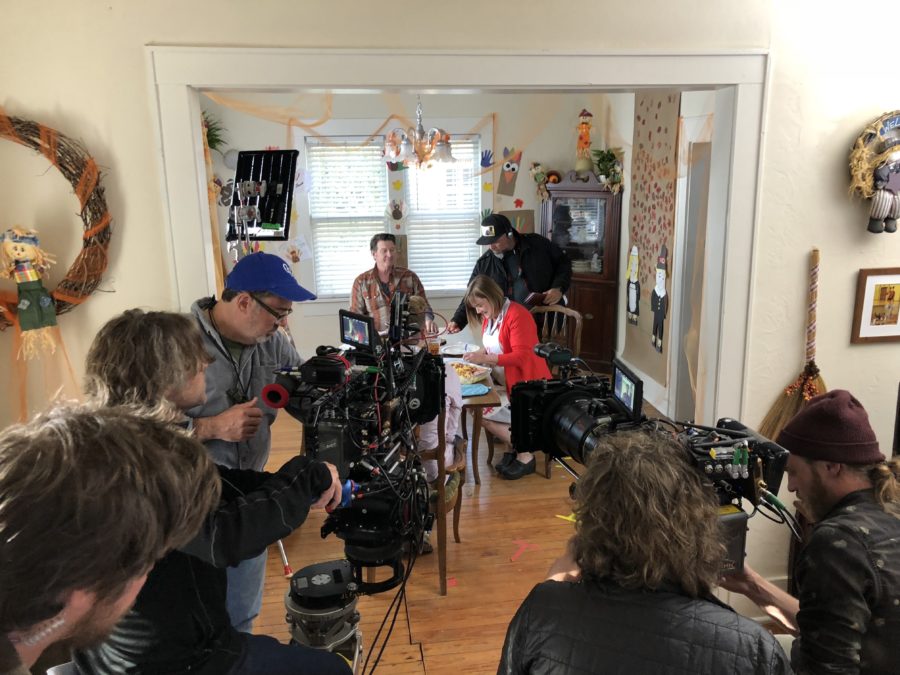 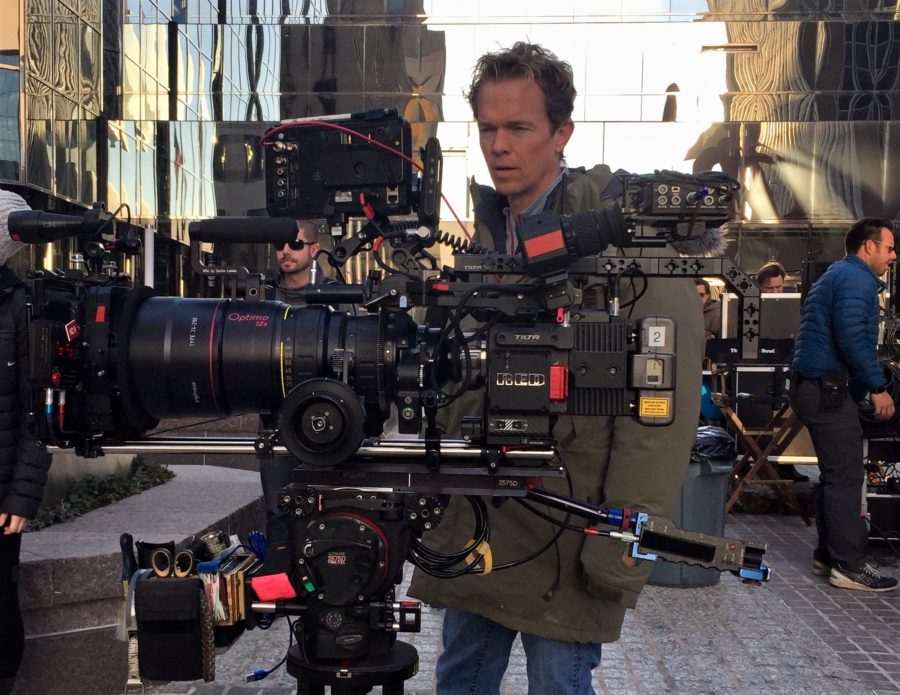 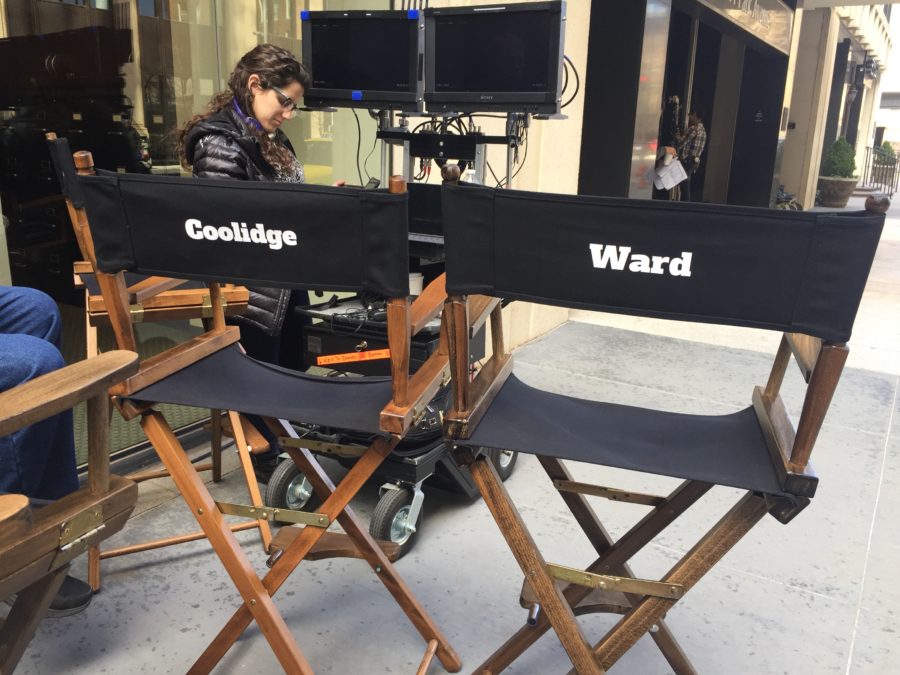 On the set of the Turkey Bowl. Lionsgate photo.
×

Any guy who has ever stepped onto a gridiron and toed the line as a high school football player can recall a particular tackle, touchdown or entire season as if it happened yesterday—daydreams about past experiences, whether it was five years ago or 55 years ago (as with this reporter). It’s particularly memorable to old Hollister Haybalers if that opponent was a Gilroy Mustang!

Such memories remain etched into the minds of former Haybalers and brothers Kip and Kirk Ward. Kirk has taken the telling of tall tales and former glories between end zones a step further by writing and producing the movie “The Turkey Bowl,” coming to theaters Nov. 15. It will also stream on Amazon Prime Video. He described the movie to BenitoLink as a “love letter to my hometown of Hollister.”

“‘The Turkey Bowl’ is an homage to the small towns across this great nation that gather around Friday night lights to watch two teams do battle on the gridiron,” Kirk said. “Growing up in Hollister, I had two forms of entertainment: watching movies at the State Theater and Baler football games at the Andy Hardin Field. Both had a big impact on my life.”

Kirk decided 26 years ago that entertainment was his venue as he journeyed from a standup comic performing in Hollister and San Juan Bautista to writing and producing his first major motion picture in Hollywood. His brother Kip still lives in Hollister and works as director of student services for Hollister School District. As a teenager with shoulder-length blond hair and a shy smile, Kip was, according to his brother, “a legend.”

Wearing #8 on his jersey, Kip quarterbacked from 1983 to 1986 for coaches Carey Laine (now a psychologist in Nevada City) and Bill Johnson (retired from SBHS last June). During that time, the Balers won the first three Central Coast Section (CCS) titles in the school’s history.

“My most vivid memory was beating Palma High School in the 1986 CCS title game and watching Coach Johnson standing on top of the lockers as the entire team stood below him wildly celebrating our third CCS title,” Kip said. “It’s burned into my memory.”

Johnson told BenitoLink that isn’t exactly the memory that came to mind when he thinks about the Ward brothers. His memory is of a game he said the Balers should have lost.

“It was Kip’s senior year and we were ahead of Gilroy 14-0, with four minutes left,” Johnson recalled. “In those four minutes Gilroy scored 14 points. Kip has a memory I can’t believe. We were at the dedication of the new stadium and he could tell every single detail of that last four minutes. I had suppressed it. What made it interesting is that Jeff Garcia, the former quarterback for the 49ers, was Gilroy’s quarterback and he was the one who led them back.”

Johnson agreed with Kirk’s opinion that Kip was a legend on the field.

“He was a starter on the varsity team for three years,” Johnson said. “It isn’t coincidental that those three years we won three CCS championships.”

Kirk played four seasons as both offensive and defensive tackle. He was defensive lineman of the year for three years running and All Monterey Bay League his senior year. He was also team captain in his senior year, and took part in the East West All Star Game. There was one particular game against the Mustangs, and one particular play, that is embedded in his psyche.

“Jeff Garcia rolled out as I flew through the line and hit him hard,” Kirk recalled gleefully, feeling the power of the hit vicariously decades later. “He dropped the ball and it took a weird bounce right into my arms. I was sprinting down the field and just as I thought, ‘Wow, this is what it feels like to run with the ball,’ when someone tackled me from behind and I fumbled it. Once a lineman, always a lineman.”

Johnson said while Kirk didn’t garner as much attention as his brother, he was a natural leader both on and off the field.

“The team really looked up to him,” he said. “And he was funny too. Sometimes as a coach, you take things a little bit too seriously and Kirk would always put things in a better perspective.”

Kirk wrote the script with his writing and producing partner Greg Coolidge (who directed “The Turkey Bowl”) over 10 years ago. He had no problem coming up with who the fictional cross-town rivals would be; the team colors in the movie represent Baler red and Mustang blue. He had a ready supply of old teammates and hometown friends to create characters that would bring his imaginary football team to life.

“I based three of these characters on guys like Pat Hodges, Nick Marriotiini, Jimmy Razo, Jimmy Smiley, Phil Stevens, Brian Miller and Pat Cluck,” Kirk said. “These were guys that I consider to be funnier than me. Whenever I’m writing comedy, I’m always thinking ‘would this make my friends from back home laugh?’”

He continued: “I will never forget watching guys like Joe Marcus, Jo-Jo Martinez, Keith Stevens, Glen Koch, Rudy Reyes, Frankie Perez, and of course the best player of all to ever grace Andy Hardin Field—my brother Kip. The main character, Patrick Hodges, played by actor Ryan Hansen, wears the number eight as an homage to my brother.”

Ten years to make a movie is not uncommon in Hollywood. The screenwriting partners had to “make their bones” in a city where people from Hollister and, in Coolidge’s case Norman, Oklahoma, have to prove themselves before someone will bankroll their movie.

Kirk has been at it since 1991, and has had roles in films including “Forrest Gump,” “Austin Powers: The Spy Who Shagged Me,” “Lords of Dogtown,” “Zombieland,” and a host of TV shows, including the highly regarded YouTube Premium TV series, “Wayne.” He and Coolidge were executive producers and show runners. Each wrote two episodes and Kirk appeared as a particularly snarky villain.

“About a decade ago, we were sitting in our office on Sunset Boulevard, and Greg said he had an idea for a movie called ‘The Turkey Bowl,’” Kirk said, “about a guy who turns his back on his hometown, moves away and is tricked into coming back home to finish the football game that was snowed out 15 years prior. The concept immediately struck a chord with me.”

Kirk said Coolidge grew up in Norman just down the street from Barry Switzer, the legendary coach of the University of Oklahoma Sooners football team, and later the Dallas Cowboys.

“When we started writing the script we talked about guys we grew up with and I started telling him all these football stories and I felt I kind of experienced what the main character goes through in the movie,” he said. “This concept was very close to home.”

As sometimes happens in Hollywood, a chance meeting finally moved the script into production.

“Greg met a young actor-producer, Tanner Anderson, who read the script and really responded to it,” Kirk said. “Tanner said he had a team of investors. We met one evening at the Hollywood Roosevelt Hotel and days later we were off and running.”

Kirk did not disclose what the budget was, but did say “everyone who has watched it doesn’t see it as a small, independent film because it looks and feels like a big studio movie, and that was the goal.”

Kirk and Coolidge agreed to shoot the movie in Norman, and even managed to recruit Switzer, who plays Coach McKinney, one of Kirk’s Baler coaches who passed away.

“I wanted to honor him and what could be more of an honor for a football coach than to have Barry Switzer play you in the movie.”