After 12 years, Larry Barr steps down as president of the San Benito County Business Council. Vice-president Bob Tiffany will take the helm. 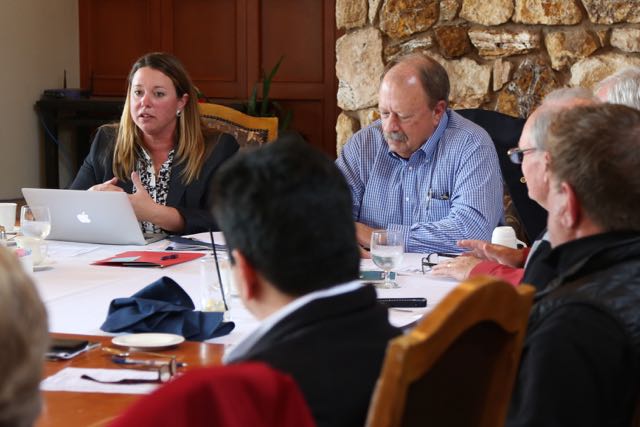 Chavez Wyatt (lt) thanks Barr (rt) for 12 years of leadership Larry Barr stepped down as president of the San Benito County Business Council at a well-attended meeting that was held at San Juan Oaks Golf and Country Club last week. Barr, who leaves his position after 12 years of leadership, is director of chemical operations at Pacific Scientific, which designs for the aerospace, defense, oil and gas and security industries.

Business Council executive director Kristina Chavez Wyatt commended Barr on his productivity and increased support for the Council by the community in general.  Barr patiently sat through Chavez-Wyatt’s accolades and quietly smiled in response to the applause that followed. Bob Tiffany, owner of Tiffany Motors, was announced as the new president of the Council and Barr will remain involved in the organization.

The San Benito County Business Council started in 2001. During the recession, the group experienced some lean years, but this month’s meeting had about 30 attendees. According to a written description of the Business Council provided by Chavez Wyatt, it “was formed to facilitate intergovernmental cooperation, collaboration and consolidation, support and expand and enhance the community job base and promote community wellness and stability.”

The community of 1,084 homes will be surrounding San Juan Oaks Golf Club in the foothills between San Juan Bautista and Hollister.

Fuller stated that the housing development will provide homes for adults 55 years and older, or “better” as Fuller jokingly described the age bracket.  Another 67 lots developed on the property will not be age restricted. Business Council members asked Fuller about projected housing costs and Fuller said 1,300 square foot homes are expected to be priced around $325,00 and 2,500 square foot homes are estimated to cost between $450,000 and $500,000. Fuller said that Del Webb’s Manteca  project is a good model for the interior of homes planned for San Benito County. Fuller explained that the house exteriors in Manteca are different but the floor plans are similar.

As quoted in a recent Benitolink story on the project, Del Webb representatives told the San Benito County Board of Supervisors that they expect the project to bring in $79.5 million in construction and have an impact of $40.7 million in retail and hotel business.

Chavez Wyatt also updated the group with information on the Panoche Valley Solar Farm, focusing on the expectation of more local jobs and added demand for housing. Con Edison  and Amec, Foster & Wheeler , will be the major employers for the project. Chavez Wyatt said more job fairs can be expected.

Juli Vieira with the San Benito County Chamber of Commerce and Visitors’ Bureau mentioned that they have been getting increased phone calls asking about hotels, restaurants and rentals in the area. Chavez Wyatt stepped in to mention that the county is exploring the idea of long-term housing trailers at Bolado Park for individuals working on the Panoche Valley Solar Farm.

Vieira, with the Chamber of Commerce brought along a glossy tourism magazine, Yosemite Journal, that the Chamber is using to promote San Benito County. The magazine distributes more than 100,000 copies to Target, Barnes & Noble, Ralphs, Costco and Walgreens, among others.

San Benito County’s story for 12 months will be on MyYosemitePark.com, which is a website that  includes videos, photos and stories. Vieira explained that the project is part of the tourism funds provided by the cities of Hollister and San Juan Bautista, San Benito County and a grant from the Community Foundation for San Benito County.

Hollister City Councilman Victor Gomez told the group, “It takes longer to go from Hollister to Gilroy that it takes to go from Gilroy to San Jose” due to traffic congestion on Highway 25.  Gomez said he’s been focusing on the key traffic issues of congestion and poor road conditions in San Benito County. He said a tax is being considered for the ballot in 2016.

Gomez also mentioned that a bond is necessary and is also being considered. He said a study of the streets and their condition has been approved for the City of Hollister.  He also said that the county would “need to put up seed money to be supported by the state" for a major road and highway project.  The Highway 25 interchange at Highway 101 is in Santa Clara County. Gomez told the group he believes Santa Clara County is planning work on that intersection.  He said that interchange is estimated to cost $300 million.

• Supporting, expanding and enhancing the community job base