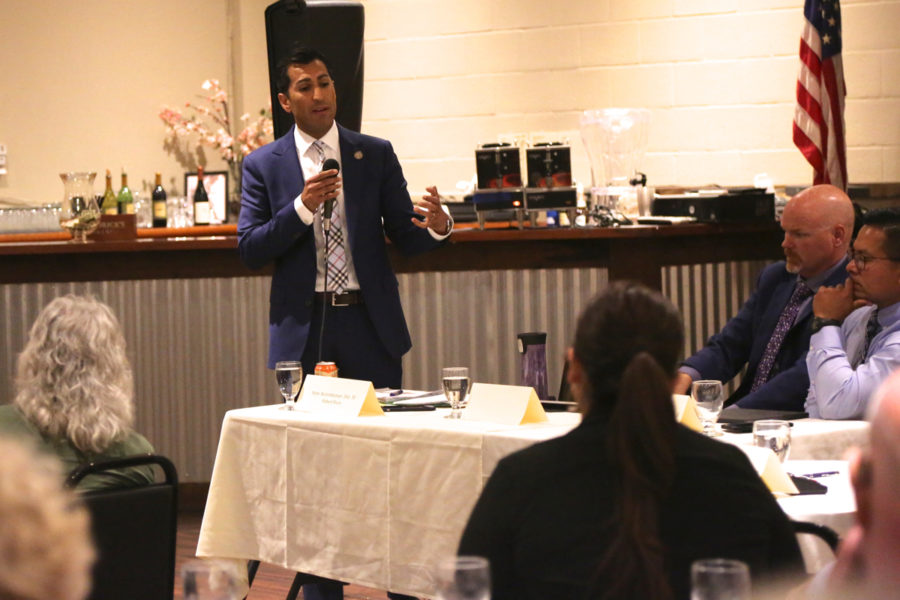 State Assemblyman Robert Rivas speaks as Supervisors Gillio and Hernandez listen on (to the far right). Photo by Leslie David. 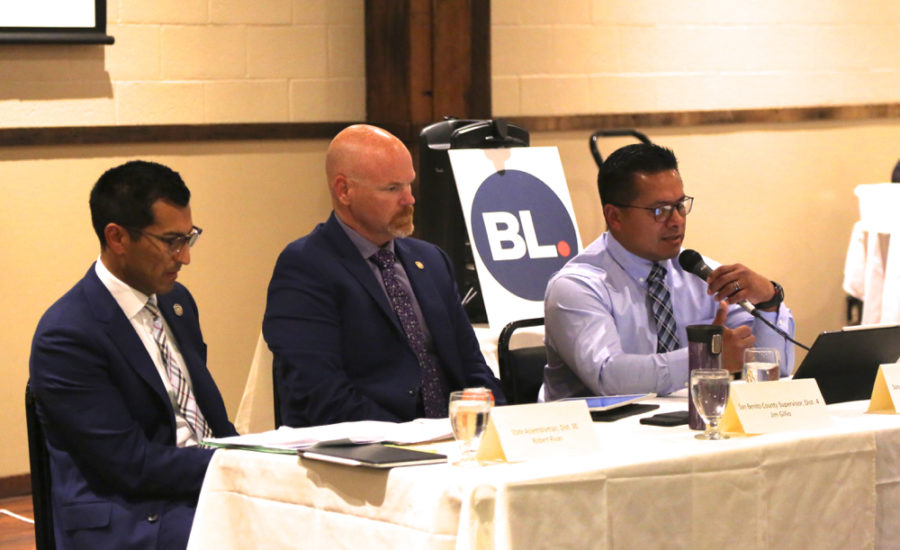 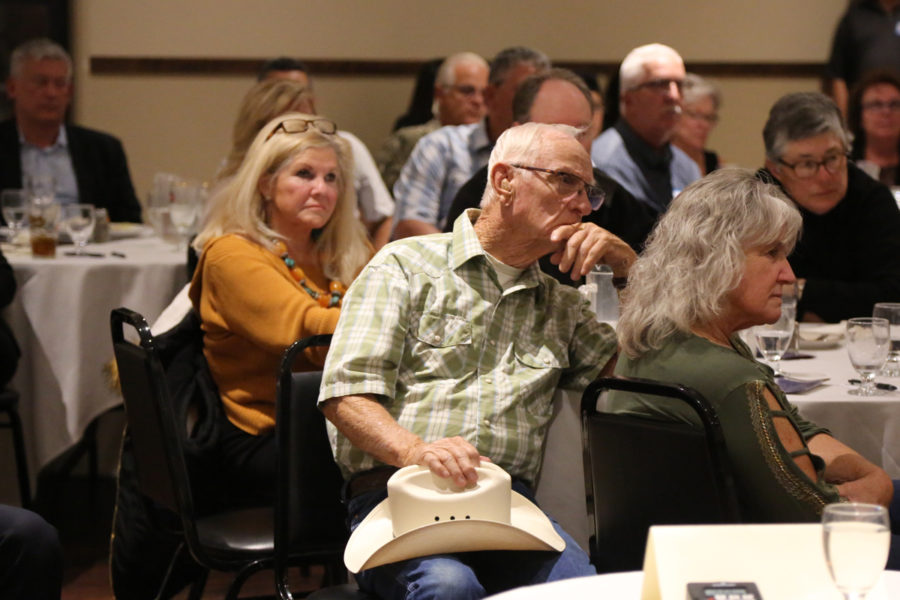 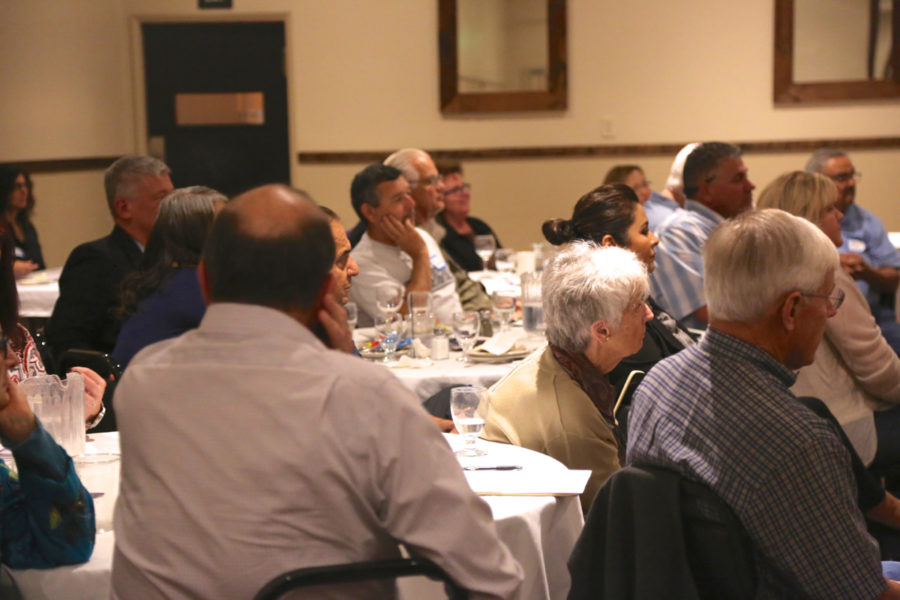 It was a full-house at the Town Hall held at Paine's Restaurant in Hollister. Photo by Leslie David. 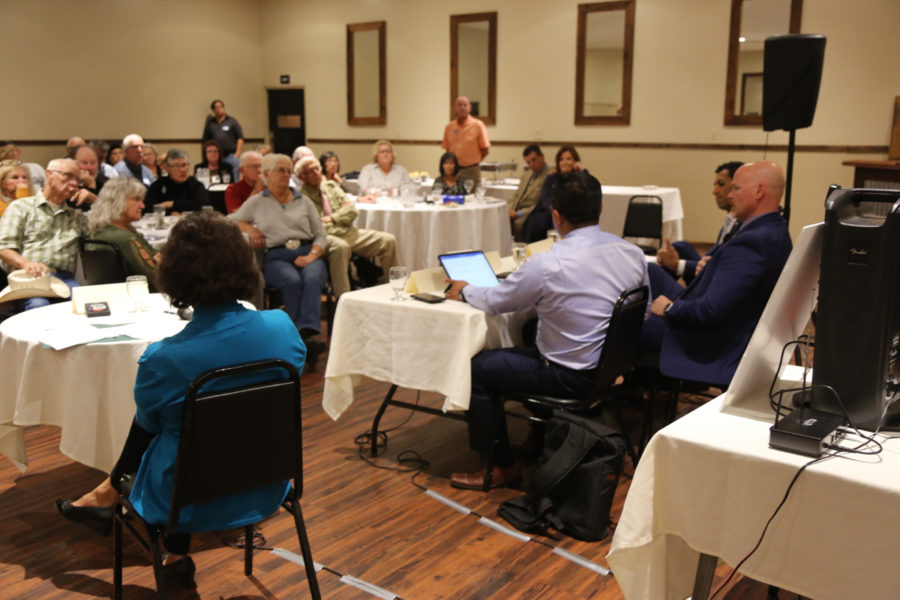 State Assemblyman Robert Rivas and County Supervisors Jim Gillio and Peter Hernandez talked of challenges and answered questions on their first year in office at an Oct. 10 town hall at Paine’s Restaurant. BenitoLink and the Community Foundation for San Benito County hosted the public forum. Former Supervisor Margie Barrios was the moderator.

The three elected officials gave brief introductions before speaking on the challenges they face in their respective districts.

“I have to work 10 times harder than any of my colleagues who represent smaller urban districts,” Rivas said. “In nonurban areas of California, we don’t get anywhere near the attention that our issues and problems deserve.”

Both county supervisors said funding was one of their biggest challenges, but Hernandez took it a step further.

“My [County Administrative Officer] reminds me we’re one person deep in all of these departments,” Hernandez said. “Even now with the passage of Measure G it makes it really hard because even if you have the money, then you need the resources. You need the people to be able to do the road work and ultimately you see the benefit of those funds.”

The night moved on to a 45-minute question and answer portion where Rivas, Gillio and Hernandez responded to attendees.

Resident Barbara Taddeo asked if there were plans to bring a nursing home or senior living center with residential care to the area, using the example of Merrill Gardens in Gilroy.

“There is Whispering Pines here in San Benito County, it’s small,” Gillio said. “There is a project in the conceptual phase, a senior care facility. Private, not public and not county, that would be in District 4 near the Southside Road/Highway 25 area. Actually because of our aging population I’ve had two different groups talk to me about wanting to do that in our county. That’s something I support.”

Rivas was asked if he agreed with the unanimous vote of the San Benito County Board of Supervisors to rezone land along Highway 101 for commercial development.

“As a former supervisor, when myself and Margie [Barrios] served together in that General Plan fiasco, we identified certain areas for these study areas for growth and for residential growth, commercial growth and economic expansion,” Rivas said. “Local control means something, and having input from local residents in making these decisions is important. What I view here is a decision that was made many years ago to identify these areas for study and opportunity.”

He added that he couldn’t comment on the vote because he didn’t have the same information the supervisors had, but said he trusted that they had “done their homework.”

“When it comes to infrastructure, I trust the local process on these issues. And certainly there are always avenues, should it be an ill-conceived plan, that will be challenged, and I would hope our local supervisors do their due dilligence, work with administration and local stakeholders. That’s what’s supposed to correct the local level. We need cooperation, we need some of this collaboration to have good policy.”

Dan Dungy, president of San Benito County Agricultural Land Trust, asked Gillio and Hernandez what was being done to reestablish a policy for mitigated land in conjunction with development.

“We need to codify this and make it a process in every development we look at, whether it’s commercial, industrial or residential,” Gillio said. If it’s in prime ag land we need to make sure it’s codified so that there’s a process.”

“The whole purpose is to preserve our community, the rural agricultural and obviously that prime soil,” Hernandez said, adding that he agreed with Gillio.

Leslie Austin, clean energy organizer with Greenpower, asked Rivas about what the state was working on with climate change, specifically regarding PG&E’s power shutdowns. Rivas called it a loaded question.

“When it comes to climate change issues, PG&E is a perfect example. This is an investor-owned utility, they love our taxpayer money, but they hate regulation. It’s been a big challenge, certainly the legislature prior to my time had some kind of bailout. In the last couple weeks of session about a month ago, they came back asking for a multibillion dollar bailout. Which as one assemblymember, that was something I was not going to agree to.”

“I have a problem when days before they file for their bankruptcy they give out $11 million in bonuses,” he said. “That’s a reckless history of this investor-owned utility. But the solution is not easy. What do we do? A bloc in legislature wants the government to take over the utility, which would be extremely expensive, a lot of liability issues involved. Certainly the path forward is a challenging one. The governor set up a task force and it’s unfortunate that their response to increased and unpredictable weather is to shut power off. That is not an acceptable alternative.”

Gillio and Hernandez also responded to questions on cannabis and hemp; specifically, what measures they would take to spread out tax revenue in the county and the enforcement of grows. Gillio said there are still no permitted cannabis operations in the county, though there is industrial hemp, and that he felt the county could have done a better job on its regulating ordinance.

“I see it now, I feel it and I smell it, it’s around the area,” he said. “We need to think about maybe increasing that acreage limit.”

Said Hernandez: “I was directly involved with the hemp ordinance. I actually pushed for us to keep it conservative. As things go, you win and you lose. Ultimately the Board of Supervisors were, I believe, well-intentioned to make sure that we created an ordinance that allowed for an opportunity for us to push back if it created a big enough problem. The nuisance element of it is actually a deterrent, it gives the county a little bit more leverage to ultimately protect the interests of the residents of the county.”

He said the safest bet is to begin with a restrictive ordinance and then open it up.

“That’s what I pushed for and I didn’t get 100%, but I’m like Supervisor Gillio. I’m ready and willing to reconsider and make sure we’re protecting our residents first.”

The evening ended with a question for all three elected officials: what legacy would they like to leave behind?

“It’s really important to me and it’s the main reason I ran to be a supervisor,” Gillio said. “I have a 13-year-old daughter and what I see nowadays is San Benito County is struggling so hard with living wage jobs and economic opportunities. I fear that my daughter is going to have to, if she wants to go to college or whatever she wants to do with her life, that she’s maybe not going to be able to afford to live here. And that’s not acceptable to me. My goal is to be able to provide a better San Benito County, a safer place for her to live, work and play if she chooses.”

Hernandez brought up his three children and said he was born and raised in San Benito County, and doesn’t plan on leaving.

“That in and of itself puts me in a perspective where it’s multi-generational. I want to make sure that anything I lay, the foundation, that ultimately it’s an opportunity for younger folks. But just the same it gets others wanting to get involved. One of the biggest deficiencies I’ve seen in being in elected office is trying to get the public to believe in you, to trust you, and then ultimately for them to get engaged enough to want to be the problem solvers.”

He added that his goal was not to get reelected and said he’d be happy to cheer on Gillio or Rivas if they were the ones who got the job done.

“I just want to see the impacts,” he said. “As a family man, as an owner of a business that literally means family [Ohana Shave Ice], that’s what our community is about. I want to preserve who we are as a rural community. I don’t want us to be San Jose or Santa Clara. I want us to be a small town community that knows each other, that cares about each other and ultimately is willing to protect each other.”

Rivas spoke about growing up in farmworker housing in Paicines and said he does his job to make a difference and solve problems. He said that at the Morgan Hill City Council meeting the previous night, he spoke about his experience in local government as a county supervisor and seeing things through a “narrow lens.”

“At the state assembly I have to use a wider lens,” Rivas said. “Housing has become this raging debate here and it’s been fueled by a lot of false rhetoric, been fueled by a lot of social media statements. It saddens me to pick up the newspaper when I’m in Sacramento or go on BenitoLink and see all the chaos and dysfunction that’s happening, whether it’s the City Council, whether it’s my former Board of Supervisors. I’m glad the board is working well together now. But that doesn’t reflect well on us as a community; it doesn’t reflect well on us that our local leaders can’t work together to solve problems that are important to each and every one of us in this room.”

He called for more civility in the county and for leaders who would work for the interests of the community.

“The biggest difference between Salinas and a lot of the communities as opposed to my own county of San Benito is you have people that work well together. That’s what we need here.”