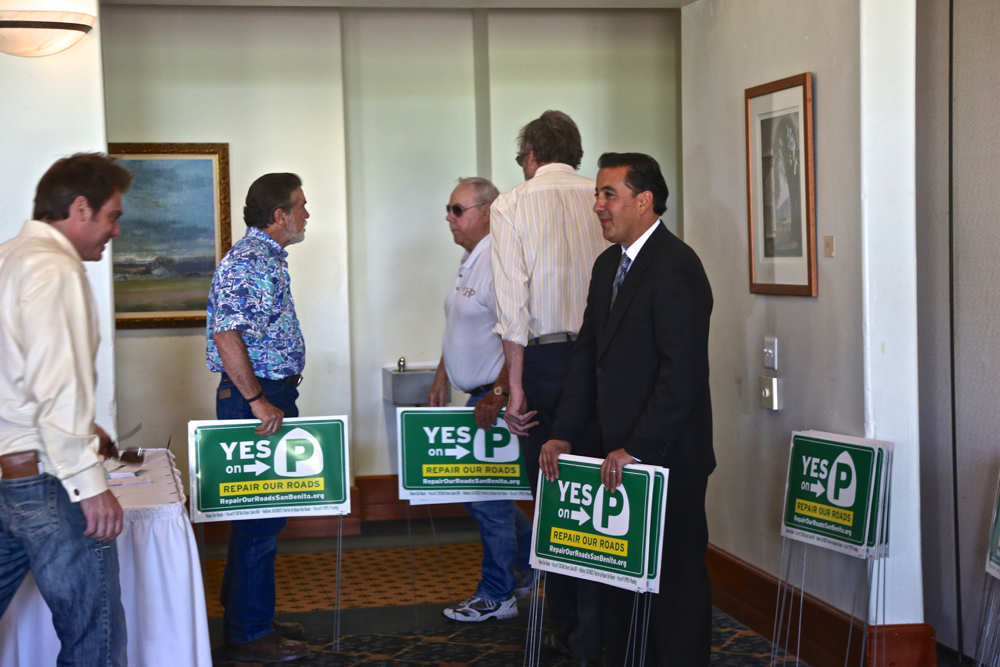 The event was billed as informational, however the Chamber presentation was clearly in support of the measure.

Hollister Mayor Ignacio Velasquez is filed with the county as one of the pro Measure P campaign representatives. San Benito County Supervisor Anthony Botelho is the second supporter on record. Council of Governments (COG) Executive Director Mary Gilbert provided background information on the measure and was available to answer questions.

The Chamber luncheon news release stated, “Find out more about Measure P, which will be on the June Ballot. This measure affects everyone in our community.”  There currently is no spokesperson opposed to Measure P registered with the county.

Juli Vieira, CEO of the Chamber, told the group that an undisclosed technology company was in San Benito County the day before the luncheon and was considering locating in the county.

Vieira said representatives of the business made it clear that the thing they found most discouraging about the county was potential transportation problems. “They want to know they can get in and out of the county,” Vieira said, noting that the visitors had taken Highway 25 east to Hollister in the morning but planned to take Highway 156 when they left the county in the evening.

Hollister City Councilman Raymond Friend said, “I am probably one of the last people to be convinced about Measure P.”  Friend cited some of the research provided by COG as a factor in what convinced him to support it.

“The Nexus report says we have 245 miles of roads in the county. We all know we’re in trouble. We need this (Measure P) to just maintain the roads where we are.” Friend continued, saying about the measure, “You’re only kicking the can down the road just a little bit.” He said Measure P could generate $30 million over the next 30 years.

Hollister resident Marty Richman said that he saw no point in bickering over what is a very difficult situation: “Caltrans has a million projects that are 15 years behind" and that San Benito County may as well stay in line to get the work done.

Richman said that he felt there was a misconception that the road issues were tied to new construction projects. He said the new construction companies are paying $45,000 per unit just to build and $15,000 for roads. He pointed out that COG has worked on the details already by planning the widening of all the major feeder roads in and around Hollister.  “The new homes are paying a lot,” he said.

Frankie Gallagher said, "The people who moved here 20 years ago don’t want to pay their fair share.” Gallagher, the director of marketing for Hazel Hawkins Hospital, stated that she feels sales tax is an equitable way to cover the cost of road repairs. “Everyone pays, not just the homeowners.”

Velasquez reminded the group that the measure would simply put a layer of protection over existing roads, but it would not rebuild them. He said the cost of tearing up damaged roads and rebuilding them would be a much higher cost than the county can afford.

There has been “a lot of bitterness and grudges” between Santa Clara County and San Benito County in the past, the mayor noted. He said he did not have any detail on what the previous issues were but he reassured the group that they are a thing of the past. “They need our help and we need their help,” he said.

Gilbert, of COG, confirmed that there is already a memorandum of understanding between the two counties and described it as a “cooperative relationship.”

Velasquez, who ran the presentation, clarified that he is asking the group to support Measure P as an individual and not as Hollister Mayor. He then asked people to contribute financially saying, “No campaign gets very far without funding.”

A stack of Measure P signs was leaning against a wall in the room and several guests thanked the mayor for the presentation and grabbed a few as they filed out of the luncheon.

In an interview after the event, Vieira told BenitoLink, “The San Benito County Chamber of Commerce has endorsed Measure P, as they feel it is necessary to repair our roads in order to attract new business and make the community more appealing to tourists.”