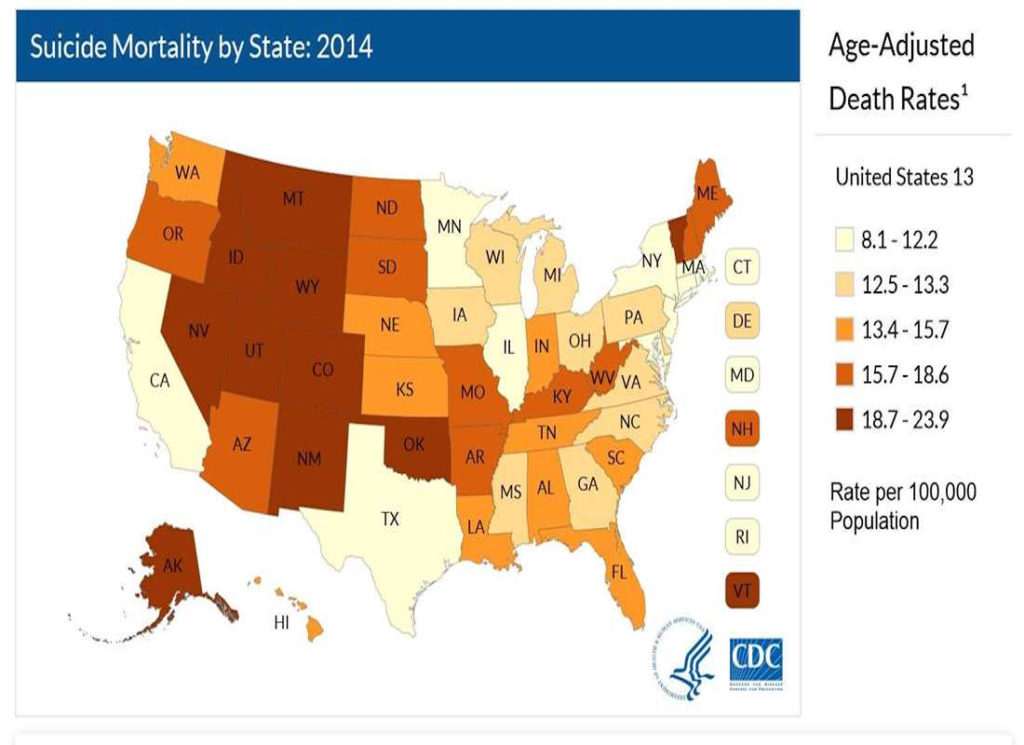 Suicide, especially among the young and healthy, is a serious problem whether you see it as personal tragedy, a waste of human resources, the result of emotional instability/depression, or a combination of all those and more.  The toll left on friends and family is significant.

California has a low suicide rate compared to the U.S. and San Benito County has among the lowest rate in the state, but it still happens.

Ages 15-24 years should be the prime of life, but in 2015 the second leading cause of death for that age group, exceeded only by accidents, was suicide.

Suicide was also the fourth ranked cause of death (13,883) for ages 25-44 years in 2015, almost twice the number that died from homicides. Some deaths classified as accidental may actually have been suicides, although no one knows the exact number.

Fortunately, both California and San Benito County have relatively low suicide rates when compared to the nation as a whole.  According to data from U.S. Centers for Disease Control and Prevention (CDC), California (10.48 suicides per 100,000 population) was among the 12 states with the lowest suicide rates, unadjusted for age, in the nation between 2008 and 2014. The suicide rate in San Benito County during that same period was 6.87 per 100,000, which was among the lowest in the state among counties with statistically significant populations.

The county Sheriff/Coroner reported three cases of suicide in 2016, all males, and four cases in 2017, two males and two females.  Ages ranged from 16 years old to 81 years.  From those figures it appears that the county suicide rate remains significantly better than both the state rate and the national average of 12.63 per 100,000 population.

Analysis of data lags incidents by several years, but alcohol, anti-depressants, and opiates – including heroin and prescription pain killers – were present in from 20 percent to 33 percent of the national cases in 2010.  Males take their own lives, primarily with firearms, at nearly four times the rate of females and represent 75 percent of all suicides.  Poisoning is the most common method of suicide for females.

Suicide warning signs aren’t always obvious; some people make their intentions clear, while others keep suicidal thoughts and feelings secret, says the Mayo Clinic.  Warning signs can be found in a BenitoLink article about the suicide of a local teen a year ago, https://benitolinkcom.wpengine.com/teens-suicide-prompts-call-awareness

“Suicidal thinking doesn’t get better on its own — so get help” sums up professional advice.