Comparision of San Benito's Campaigns For and Against Measure J 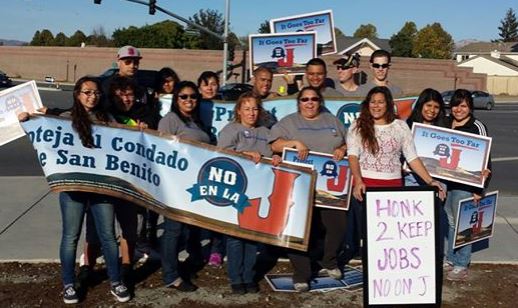 The rain fell steadily all Halloween afternoon. But a determined group of YES on J volunteers held umbrellas and signs for two hours at the corner of Safeway in Hollister. With soaked shoes and clothes, they smiled and waved while vehicles zipped by and honked in support.

The next day, a youthful group of NO on J canvassers gathered at the same Safeway corner. They whooped and hollered with great enthusiasm. After 10 minutes, the rain began. It was a light shower, but the group quickly packed their bulky signs into their vehicles and departed.

San Benito United for Energy Independence runs the NO on J campaign and is led by a treasurer located in San Rafael and a principal officer located on K Street in Sacramento. The $1.9 million they recieved from the oil Industry allows them to hire a small army of young people (many from outside our county) to work as canvassers and to hold signs at street corners for $15 per hour. In the next few days, these paid campaign workers will be seen throughout Hollister with their NO uniforms and carrying beautifully printed banners and signs.

The opponents of Measure J claim to represent "San Benito farmers and cattlemen" and have run ads with images of local ranchers. When the County Elections Office released October financial campaign reports, we learned that San Benito United for Energy Independence is 100% funded by outside oil companies — with no funding from local farmers and cattlemen. In contrast, the YES on J campaign received over $30,000 from local farmers and ranchers, and is primarily funded by local residents and their friends/family.

It's obvious now that the oil Industry is "astroturfing" in San Benito. Here's a definition from Wikipedia: Astroturfing is the practice of masking the sponsors of a message or organization (e.g. political, advertising, religious or public relations) to make it appear as though it originates from and is supported by grassroots participant(s).

I've been a volunteer canvasser for the YES on J campaign for many weeks, speaking to hundreds of voters. I'm impressed that the majority of San Benito voters are not fooled by the oil industry's astroturf campaign. They are joining local farmers, ranchers, business owners, doctors, and educators to protect San Benito County's water, health and economic future.

On November 4, we have an opportunity to vote and send a powerful message of hope — that local democracy prevails and communities can still control their destiny. Join this historic campaign. And urge your friends and neighbors to do the same. Vote YES on J!