There is no excuse for lukewarm support 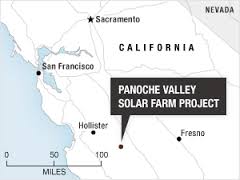 On Jan. 20, a majority of the Board of Supervisors found another reason to delay moving the Panoche Valley Solar project from proposal to existence.  The issue was a behind-the-locked-fence dead-end dirt “road” to nowhere that the local property owners wanted vacated to the solar project.  I put the word road in quotes because it is a road in name only.

Although the county has taken state money for it, they never spent a dime maintaining the road and probably didn’t even know it existed. Now it has become the most important road in their whole domain for some because it provides political cover for the opposition stalling the $650 million capital renewable energy project just a few more weeks.  A few weeks means tens of thousands of dollars and property issues directly impacting the project’s ability to obtain funding – another case of death by a thousand cuts.

I have seen the board move heaven and earth when they wanted to do something, but it is obvious that this fantastic project has only lukewarm support because it involves the dreaded C-word: change.

After all this renewable energy project will only save 30 million barrels of oil over its lifespan, put millions of dollars into county coffers for local benefits, create jobs to remove people from poverty, and preserve almost 40 square miles to benefit endangered species; why are those things important? (Sarcasm alert).

I could go on and on about the benefits of renewable energy, but I do not have to.  The same board members who supported Measure J have made the case while demonizing fossil fuels, but that fight seems to have taken something out of them because they are now hanging back on the solar project until they can determine which way the political winds are blowing; that may be something, but it is hardly leadership.

I understand political opportunism, but when it really damages the national, state, and local interests one must wonder who is being served by such action or inaction.  The Panoche Valley Solar project, which has survived two legal challenges, should have the enthusiastic support of the entire Board of Supervisors and the Hollister City Council.  We need the energy, we need the jobs, and we need the economic benefits.

It’s time for local politicians to put up or shut up on promises of a brighter future.