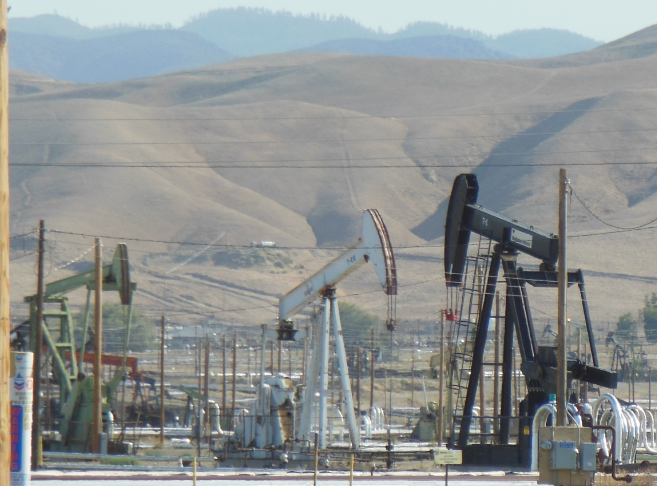 More than a hundred locals, many of them ranchers from San Benito County, attended a special lecture given by the former mayor of DISH, Texas, on July 25.

Calvin Tillman spoke of the hazards of living in a virtual sea of fracking fields, and how he and his family escaped it all. With a PowerPoint presentation and video clips, Tillman told the crowd gathered at Sunnyslope School auditorium how groves of trees in his town died and how his family started getting sick.

“Our children started having a lot of nose bleeds,” Tillman said with a soft Texas drawl. One of his sons, suffering from asthma, had to breathe from his inhaler daily. As mayor, Tillman managed to get air monitors that detected cancer-causing agents and neurotoxins installed throughout the small hamlet, and every time the poison levels spiked, his children had nosebleeds in the middle of the night and the family had to run for the embulizors.

DISH, Texas, renamed after the TV satellite company bought the rights to the town's official moniker, had a population of 200 – or 500, if one includes the unincorporated suburbs. It rested atop 11 massive natural gas pipelines, and as Tillman put it, “became the test bed for the Marcellus Shale.”

Hydraulic well fracturing, or fracking, uses a witch’s brew of some 600 toxic chemicals, sand, and millions of gallons of water injected at high velocity deep underground to fracture existing rock, or shale, that holds remnants of natural gas or oil. The process releases huge volumes of methane into the atmosphere, a greenhouse gas 26 times more potent than carbon dioxide. The wastewater can contaminate underground aquifers that ranchers depend on living in the country.

“When I moved to DISH, there wasn’t the high-intensity drilling going on that there is now,” Tillman explained. “And then it exploded.”

“These companies have the power of eminent domain,” Tillman said. The big oil and gas industry is also the only one in the nation exempt from the Clean Water and Clean Air Acts, as a result of what is called the Halliburton Loophole of 2006, when then Vice President Dick Cheney pushed the exemption through Congress.

Tillman said the hardest decision he ever made in his life was to move from his “American Dream” in DISH. He had a home, had just built a barn for several family horses, attended his church with his family and enrolled his kids in the local school.

“But we feared for our children,” Tillman said. “What kind of a place do you live in where you have to get your children’s blood tested? You have to ask yourself.”

Tillman’s lecture was well received, certainly by members of the Coalition to Protect San Benito, a group of locals who have worked diligently to get the Protect Our Water initiative on the ballot. But during the Q&A period toward the end, property owner Roy Lompa took the microphone to state his opinion.

“I don’t agree with anything that has been said here today,” said Lompa, who then proposed that if fracking gets banned in the county, he wouldn’t have any property rights left.

Tillman calmly replied that it was his property rights that became infringed when the oil and gas companies poisoned his air and water. “If you can learn to keep your chemicals off MY property, have at it,” said Tillman. “But I don’t choose to drink that water, nor do my children.”

Another attendee questioned the need for a fracking ban in the county when apparently there has been no fracking activity in San Benito. Actually, it has occurred, according to the state regulatory agency on oil and gas, DOGGER, and there are conventional wells in south county near Panoche Valley currently being re-stimulated with fracking wastewater, according to DOGGER maps and information.

Local resident Larry Rebecchi gave a few words at the end of event, saying, “I see the ban as a vaccination against fracking.”

A recent news investigation conducted by NBC has shown the state is woefully behind in disclosing to the public where fracking wells are located as required in SB 94, passed by Sacramento lawgivers earlier this year.

Tony Ruiz, who attended the event, was enthusiastic about what he heard. He said that if fracking starts in San Benito, it would destroy the ag engine here.

“I think renewable energy should be a priority in this country,” said Ruiz. “We have the technology, but we are being trumped by the profit seekers.”

Tillman came to Hollister "on his own dime," as he said, because he doesn’t want San Benito folks to go through what he and his family has. The Coalition to Protect San Benito made arrangements for the event.