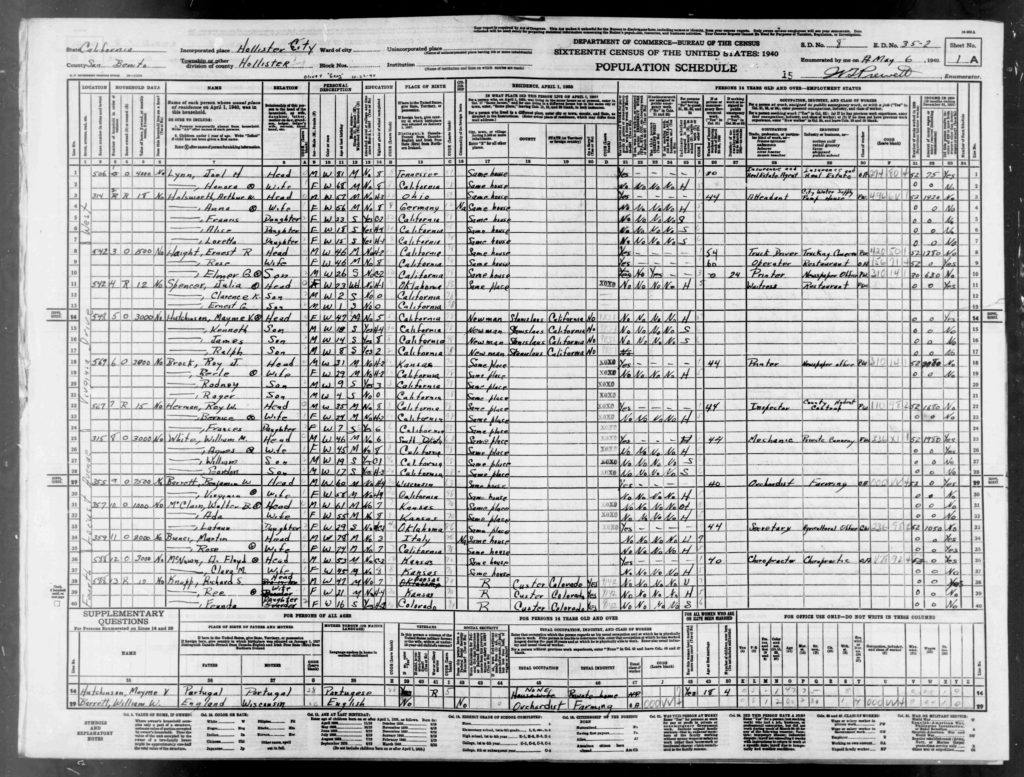 History is defined as the study of past events, particularly in human affairs. Historically, I find ordinary people interesting; they outnumber extraordinary people, so they really reflect who we were at the time.

Now we can learn a lot about the approximately 3,881 mostly ordinary people who were recorded as living in Hollister during the 1940 census. In 2012 the U.S. National Archives released the detailed 1940 census records. A website allows you full access to the record images in addition to maps and descriptions: https://1940census.archives.gov/

Go to the link, press Get Started, then under location Start Your Search, select California as the state, San Benito as the county, Hollister as the city, and All as the street and hit search again. You’ll be presented with three packages, 116 image pages all together, of 1940’s detailed census data.

This includes names, addresses, where people were born, their age, gender, family relationships, how much formal schooling they had, occupations, number of weeks they worked in 1939, annual income and more.

For example, J. Machado, head of household, was a single white male of 36. He had one year of high school, was born in California, worked 48 hours a week in March as an “Auto Salesman,” was employed all 52 weeks in 1939 and made $1,700 that year. His mother, Teresa, was a widowed white female of 66, born in Portugal, had no formal education, and was not employed.

By the way, the $1,700 a year was big money on that page of the census. Farm laborers were making $480 for 32 weeks of work while an usherette at the local theater made $640 annually, and 12 weeks of work at the cannery earned someone $252.

They came from everywhere nationally and internationally. The older generation had little formal education—lots of zeros indicating none at all. The 20-year-olds had more, every now and then some high school and rarely a tiny bit of college; the youngsters, a generation of California-born offspring, were better educated than their parents.

Digitizing this limited number of records to allow data mining would be a great project for San Benito High School students as a group; after all they come close to outnumbering Hollister’s entire 1940 population and, importantly, it would give them a sense of the ordinary people who made up Hollister’s history.