The two best community colleges within driving distance, Foothill and De Anza, will only get five San Benito High School graduates, according to a survey of the 2018 class. 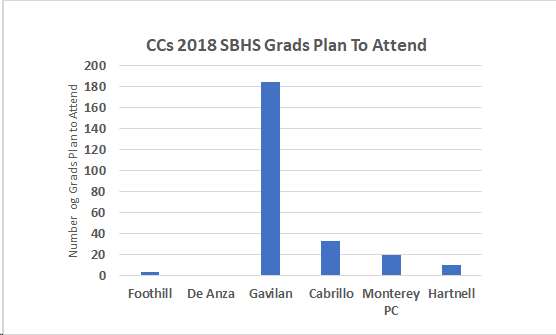 This opinion was contributed by Marty Richman. Opinions expressed do not necessarily represent BenitoLink or other affiliated contributors.

Foothill College and De Anza College stand head and shoulders above other local community colleges in both graduation rates and earnings potential according to the U.S. Department of Education College Scorecard and both colleges are affordable; however, they are getting almost no attention from San Benito High School graduates.

Here are the key facts from the U.S. Department of Education:

According to a survey of San Benito High School 2018 graduates only 5 of total 292 who say they will be attending community college, plan to go to either school; that’s less than 2 percent.

The 53 percent of responding students who say they will be going to some community college (180 to Gavilan) is surely a greatly exaggerated number; typically, less than 20 percent of a district's 18 – 24 year-olds are enrolled. Many don’t want to admit that they have no solid plans for the future, but if they do decide to go they need to get the best education they can for their money – and the public’s massive investment in this system.

Yes, dedicated students can be a success anywhere, but it’s a lot easier in the right environment at a school with a good track record. If you were a lazy high school student like me and/or your finances can’t afford a four-year school without the scholarship you did not earn (that was me again), take heart; you still have a chance to get a great education, but you need to go where they have proven they know how to do it.

Growing up means taking responsibility for the important decisions that will change your life – select wisely.