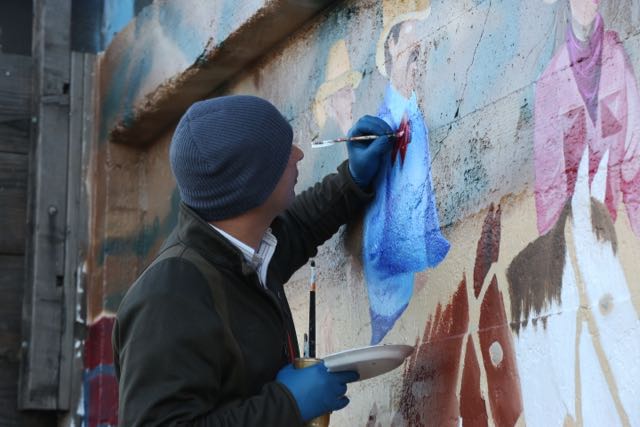 Phillip Orabuena, the main artist on the mural paints at all hours. Phillip Ray Orabuena is the lead artist on the new mural being painted at the base of Park Hill on San Benito Street in Hollister. Orabuena is from San Juan Bautista and served three tours in Iraq starting in 2004. Despite what he termed as verbal roadblocks from local bureaucracy, Orabuena was the driving force behind the scenes and his undaunted direct contact with the land owner is what made the mural happen.

Orabuena’s art career developed to a higher level overseas when he was asked by friends and other soldiers to create art for them. He worked in a mechanical shop preparing equipment for duty. “There would be artwork all over the shop. So the guys would ask me to put art on the over-armour on their military vehicles,” Orabuena says. “They liked raiders and were into skulls and things like that,” he says. In 2014, Orabuena was given permission by the city to paint a veterans' mural at Third and Monterey streets in downtown Hollister.

After initially being told he couldn’t do it, Orabuena got help rifling through the records at City Hall and contacted the owner of the “Used Car” property on San Benito Street. The owner, who lives in Idaho, discussed the style and subject of the painting with Orabuena and gave him permission to go ahead with the project. Orabuena is the lead artist on the nearly-finished cowboy mural project.

Adam Valentino is an artist from Northern California and is currently based in Hollister. He is contributing to the mural project on San Benito Street at the base of Park Hill. Valentino works with charcoal, pastels, paintings on canvas and aerosol on small and large scale walls. He creates in a wide variety of styles. He has a love for art and music.

Valentino markets art through the website "Etsy" and has his own website. He was born in San Jose and started drawing at an early age. He says in his bio for Etsy, “I have a love for graffiti art and at times (it) has a big influence in my art. I also enjoy portrait drawing and would like to do more commissioned pieces. I love the art of life and give a piece of me in every piece I do!”
Valentino Art Website

Joel Esqueda has been an artist since he was a young child. He has a degree from California State University, Monterey Bay in visual and public art with a concentration on murals.

Esqueda is the main artist on the downtown Hollister utility box project. He is a surrealist/abstract artists who likes to create art utilizing various lines and shapes. His art is bold, creative, and unique in that it does not mimic mainstream ideology in terms of his self-expression. He specializes in large-scale public murals. According to his bio, Esqueda favors extreme, unconventional, and whimsical forms of artistry.
He uses graphite, charcoal, chalk pastels, and acrylics in his artwork. He is originally from San Jose and moved to Hollister at the age of 10. He works with developmentally disabled adults in Hollister and is looking into applying for master of social work programs now.

Rolan Resendez is an organizer for public art projects and cultural events. Resendiz has acted as organizer and press agent for this informal group of artists involved in the San Benito Street cowboy mural project and the utility box project in downtown Hollister. He is on the board of the San Benito County Arts Council.

When asked about his interest in the public art, Resendez said, "I feel that it should be held to a certain standard, but less controlled. Local artists should feel supported and included in making Hollister an accurate reflection of a community we reside in and our raising our children in.”

Orabuena, also said he feels strongly about being given the opportunity to paint in his community. He says that too often people are quick to tell artists why they can’t do projects. He explained the focus is typically on how it will cost too much or that there is a process that everyone must follow. Orabuena says, “I just go out and do it. I get the paint, I clean up the place and I just start working and they’re still talking about how it can’t be done.” Instead of arguing and getting hung up in the “red tape," Orabuena says, “I just go out and do it.”

Resendez says the current system is blocking innovation and creative projects. “Most of all I feel that public art should belong to the public. There needs to be a fair, transparent, public process in place when implementing public art,” Resendez said.

This group of four has been actively involved in creating murals and other public art projects primarily in Hollister over the last few years. The artists all agree that the bureaucracy of approving public art is hampering it. Resendez put it this way, “My vision for art in our community is work that is reflective of Hollister's culture and diversity. I feel that is should be easily accessible to all artists in the community." What is bubbling up from the community is art that is fresh and expressive with poetry and bold color. With or without organizational or governmental support, more art is on its way.