A group of 40 school children, aged 10-14, met this week for the Youth Alliance's annual Diabetes Prevention Camp for Youth. The kids spent their days learning about healthy eating and exercise. 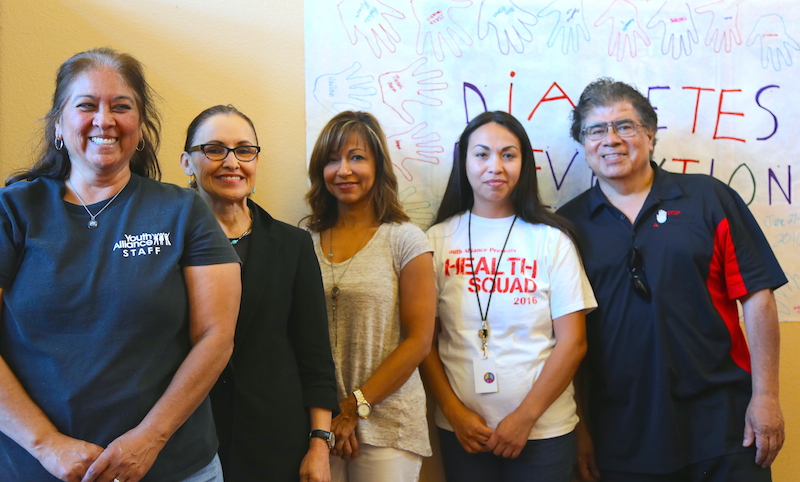 At a group dinner on a recent Thursday night, attendees and organizers of the Diabetes Type 2 Prevention Camp for Youth met and celebrated the closing of the camp, and the successes that the four-year-old program has seen since its conception. The camp, presented by the American Diabetes Association and the local Youth Alliance, focuses on educating children ages 10-14 about the risks of type 2 diabetes, and how lifestyle changes can prevent developing the disease as an adult.

The statistics are staggering: in a Health Policy Brief released by the UCLA Center for Health Policy Research in March, the national prevalence of diabetes in adults is said to have nearly tripled in the last 30 years. In San Benito County specifically, the majority of adults living in the area are either pre-diabetic (47 percent) or have already diagnosed as diabetic (12 percent). With almost six in 10 of its total population falling into one of these two categories, San Benito County has a higher prevalence of diabetes among adults than the neighboring counties of Santa Cruz and Santa Clara, with 52 percent and 55 percent of their respective populations identified as diabetic or pre-diabetic.

Organizers of the Preventative Camp for Youth believed that by arming children with healthy eating and exercise habits while they are still young, they can help stop diabetes type 2 before it starts. The camp met every day for a week at the Rancho Community Center, a rec center located inside of an apartment complex in central Hollister. Rsidents of the complex, across the street from Rancho San Justo School, are given first priority for available slots in the camp. Tuition-free, the camp is an enriching opportunity for lower-income community members whose children might not otherwise be granted access to such educational health services.

The children meet every day from 9 in the morning until 4 in the afternoon. Regular exercise is a critical component of diabetes prevention, so large portions of their days are spent outside in a nearby park, participating in active games like soccer, basketball, and relay races. Norma Molina, a registered dietician and nutritionist, leads interactive lecture-style segments of the days, in which students are informed about healthy eating habits. She teaches the kids how to read nutrition labels on store-bought foods, and to distinguish between “everyday foods” and “sometimes foods." Foods that contain under ten grams of sugar and over five grams of fiber should be eaten daily– “everyday foods." Food items that don't make the cut should be consumed only “sometimes,” on a more infrequent basis.

Dolores Villalon, CASA Kids Club Coordinator for the San Benito Youth Alliance, spoke to BenitoLink at the end-of-camp dinner about the other kinds of nutritional information that the camp provides to attendees. “The kids are ages 10-14 but if they are younger than that and they are at-risk, have a family member who has diabetes, I’ll usually accept them,” Dolores explained. “Safeway provides all the snacks and lunches, and Ms. Norma [camp nutritionist] also brings snacks to teach the kids how to make their own food at home.”

“We had two field trips,” Villalon continued. “First, we gave the kids pedometers and walked to Safeway, so they could see how many steps it was to the grocery store. Inside Safeway, the kids were broken into two groups and given a tour of the store, and shown where to find ingredients that were good for them such as vegetable and fruits, meats, dairy, and wheat. We went down the aisles and looked at the snacks, how much sugar some of them have, and how to find healthier alternatives.They were taught how to read nutrition labels, how much sugar is in a product, how much fiber, how many calories and carbs. They got to know that the more fiber a product contains, the better it is for you, but also to watch the sugar content. And then the finale of the week was that they got to go on a field trip to Morgan Hill Aquatics. The district of Gilroy provided the bus, and the kids got to play there for about two-and-a-half hours.

“SNAP Ed also came and did a demonstration on how to eat healthy, and gave the kids cookbooks full of snacks they can make themselves. At the end of the week they also were given their own pedometers. Every day they came here this week they were given a raffle ticket, and today we’re raffling off four bikes, with helmets and locks. We’re hoping it all encourages the kids to stay active.”

Four bikes were donated to the camp for the raffle, and the rest of the funding for the camp came from the American Diabetes Association. Jesse DeLaCruz, the community health strategies manager at ADA, personally championed the funding of the experimental camp by the health organization. Four years ago, already armed with the idea of such a preventative diabetes adulation camp, he reached out to Hollister’s Youth Alliance with the intention of seeking out a space in the area to host the camp. It was Diane Ortiz, executive director of the Youth Alliance, recommended the Rancho Apartments as a potential site. After Villalon was brought on to organize the camps activities, the rest fell into place quickly.

“We’ll search out an area that's really underserved,” explains DeLaCruz, of the ADA’s program creation process. “We look for areas where we know the poverty level, and we know the need for fixation on diabetes. We called a lot of organizations looking for a site, and this organization [SB Youth Alliance] was willing to work with us to create a really unique camp. This year in the U.S., no one in the entire county did a type 2 diabetes camp. And that's the uniqueness of this camp: it's urban (or in this case, more agricultural), focused on the Latino community, educating about type 2 diabetes, and it's free. While most other org’s are doing type 1 diabetes camps, we’re trying to work with kids before they get diabetes, in order to prevent it later. We don't want them to be statistics after age 45.”

This is the camp’s fourth year in existence; class sizes once exceeded 50 students, but the camp decided to cut back to 40 slots to ensure instructors could spend more time with each individual. Applications for the camp are given to schools in the county that participate in Youth Alliance afterschool programs. Accordingly, R.O. Hardin Elementary, Maze Middle School, and Calaveras Elementary are the first to give parents the opportunity to enroll their children in the camp. With the costs of supplied food, instructional lectures, interactive projects and field trips, the camps cost around $7,000 to produce. None of the children who attend the camp are diabetic; the goal of the organizers of the camp is to educate children in the community who are not already afflicted with the disorder, in order to prevent them from developing sugar regulation issues as they get older.

It is Villalon’s hope, as well as the goal of De La Cruz, that the camp can grow in size in the coming years and extend to be a two-week program, instead of a single week. “That way,” as Villalon stated, “more kids would have the opportunity to come to the camp. We could get two classes of 40 kids, so 80 kids total, out here in the summer. Double participation, and allow more people to apply.”

De La Cruz’s aspirations also extend outside of the county. “We’re definitely going to expand into Gilroy,” says De La Cruz of the ADA’s plans for additional camps. “We’re doing another camp similar to this in Morgan Hill in two weeks. So yes, we’re going to expand and find out if we can get this organization to expand this camp to be a two-week program, or if there’s a need in another part of town, we’ll see if there are other organizations who could help us set up something similar elsewhere.”

"Hollister is a community that, I think, is so ready for this kind of program,” he mused. “We’ve got enormous support from the parents, great support from the kids, and if you look at the answers to the surveys that we give out to the kids at the end of the program, we’re seeing that they’ve learned an awful lot. At the beginning of this week, in camp, Norma was asking the kids ‘Does anyone know anything about diabetes type 2?’ And this little girl raised her hand and started saying some really amazing things about diabetes 2, which was stunning to us. So Norma asks the girl, ‘Were you here at this camp last year?’ And this little girl answers, “No, I was here two years ago’. So it’s clear the kind of impact we’re having. That that information is deeply learned and impacts young behavior, that’s the kind of impact we’re looking to create in the community.”