The DREAMers Club at San Benito High School strives to empower, educate, and engage the school's undocumented youth and their supporters 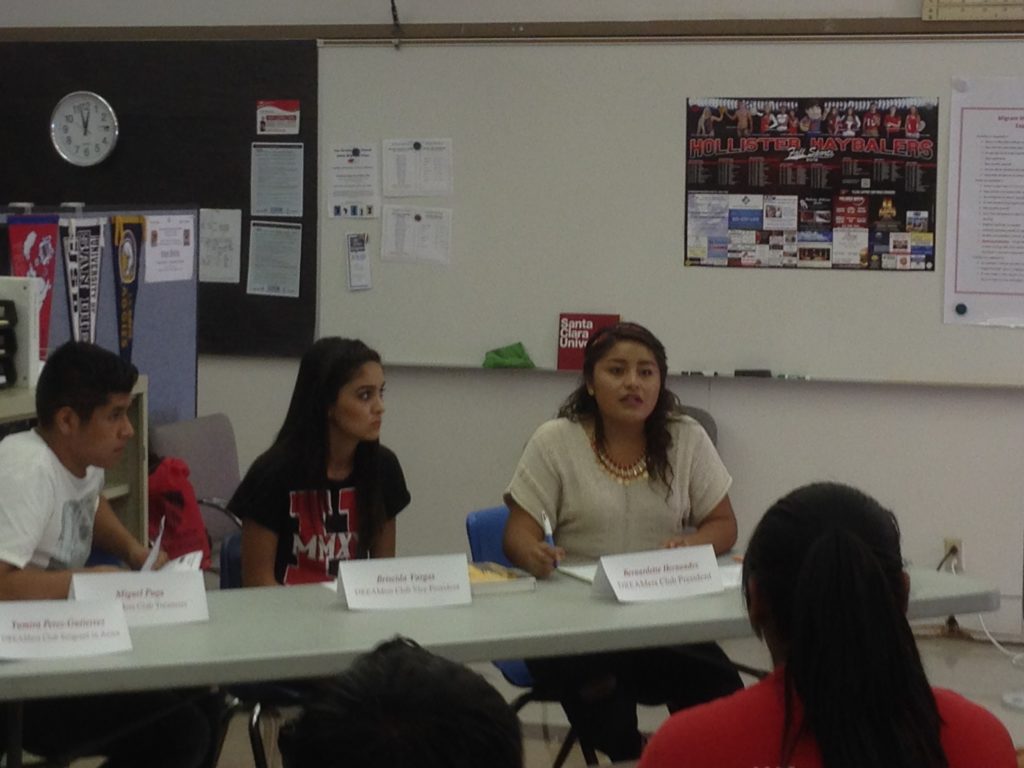 In many ways, Bernadette is a typical high school senior, busying herself with plans for the future, while enjoying the moments that will become part of her teenage past. And like her peers, she speaks with the self-assuredness of a young adult ready to take on the world. But if one listens closely, there’s a hint of an accent in Bernadette’s speech as she articulates her life’s ambitions, explaining that after high school she’ll pursue her dream of a college degree despite the challenges resulting from her undocumented status.

A new club at San Benito High School hopes to aid Bernadette and other undocumented students in opening the door to higher education.

Co-founded by Bernadette and Irene Bailey, a Migrant Education Program Specialist for the high school’s district, the DREAMers Club advocates for educational equality and equity for every student, regardless of their legal status in this country.

Open to all students, the club also aims to inform its membership of the rights of undocumented students, according to its constitution.

The club takes it name from the Dream Act, the failed bi-partisan Congressional legislation that would pave the way to citizenship for young people—referred to as Dreamers—who arrived here illegally as children.

Spurred by political gridlock and the lobbying by Dreamers and their supporters, President Barack Obama took executive action on June 15, 2012, creating the Deferred Action for Childhood Arrivals (DACA) program.

Administered by the Department of Homeland Security, DACA temporarily shields an undocumented youth from deportation, provided he or she meets several criteria, including: 1) the individual was under 31 years old when the president’s program was initiated; 2) he or she arrived in the U.S. before his/her 16th birthday; and 3) the individual is currently in school or has graduated from high school or completed a GED (general education degree) program. If granted, DACA allows for a two-year reprieve from deportation, at which time one can reapply to the program, according to the Homeland Security website.

In the absence of federal legislation, several states, including California, have passed their own DREAM Acts—policies designed to help undocumented students overcome the obstacles to college, especially the financial costs.

For example, California’s AB 540 allows for undocumented students to pay in-state tuition costs and makes them eligible for state aid and scholarships.

One of the goals of the DREAMers Club is to make its members aware of programs and policies, such as DACA and AB 540.

During the club’s meeting on Sept. 25, its co-founder and president, Bernadette, presented information on scholarships for Dreamers and non-Dreamers, distributing fliers and answering questions from several members.

Bailey, who also serves as the club’s advisor, clarified a few of Bernadette’s responses and suggested ways of improving one’s chances at receiving financial assistance.

When Bailey came to work at the high school district last year, she was surprised to find that a DREAMers Club didn’t already exist, given the presence of undocumented students on the high school campus. “The idea [of a club] came from a need I observed last year,” she wrote by email.

For years, Bailey has worked with undocumented youth—a population whose aspirations, she explained, are often clouded by questions of self-identity and feelings of fear. She added by email, that she hopes the “Dreamers [Club] becomes a safe haven for students.”

District Superintendent John Perales echoed that sentiment, even though he admitted not knowing about the club’s formation. “I love it…It’s awesome,” he said of the club’s purpose.

As a former principal, Perales said he witnessed first hand the difficulty undocumented students encountered matriculating from high school to junior college. He said he believes that the DREAMers Club will facilitate that process, empowering students and giving them the “social capital” they need to succeed.

Bernadette’s mother, Maria, explained by phone in Spanish that the school needed a DREAMers Club. “It’s necessary because I have acquaintances that would qualify for this and whose kids don’t continue their education,” Maria said. Employed in seasonal work, she plans on helping out the club when she can. Parents and high school staff who are involved in the club will become honorary members, according to Article 2 of its constitution.

Asked why she co-founded the DREAMers Club, Bernadette, who also serves as the president of the League of United Latin American Citizens Youth Council Chapter 705, said, “..there’s need to be more diversity in school, and more Latinos need to be represented in colleges, businesses, etc.”

Optimistic and cheerful by nature, Bernadette is not discouraged by her undocumented status. In fact, she’s proud to call herself a Dreamer. With the support of the DREAMers Club she’ll continue to pursue the dream that led her parents from the family's home in Mexico to the United States in 2004 with their then-6-year-old daughter—a dream that includes a high school diploma and college degree.

Information on scholarships for Dreamers can be found at TheDream.US.