The visions and delights of Grillin & Chillin Roadhouse and Alehouse beer. 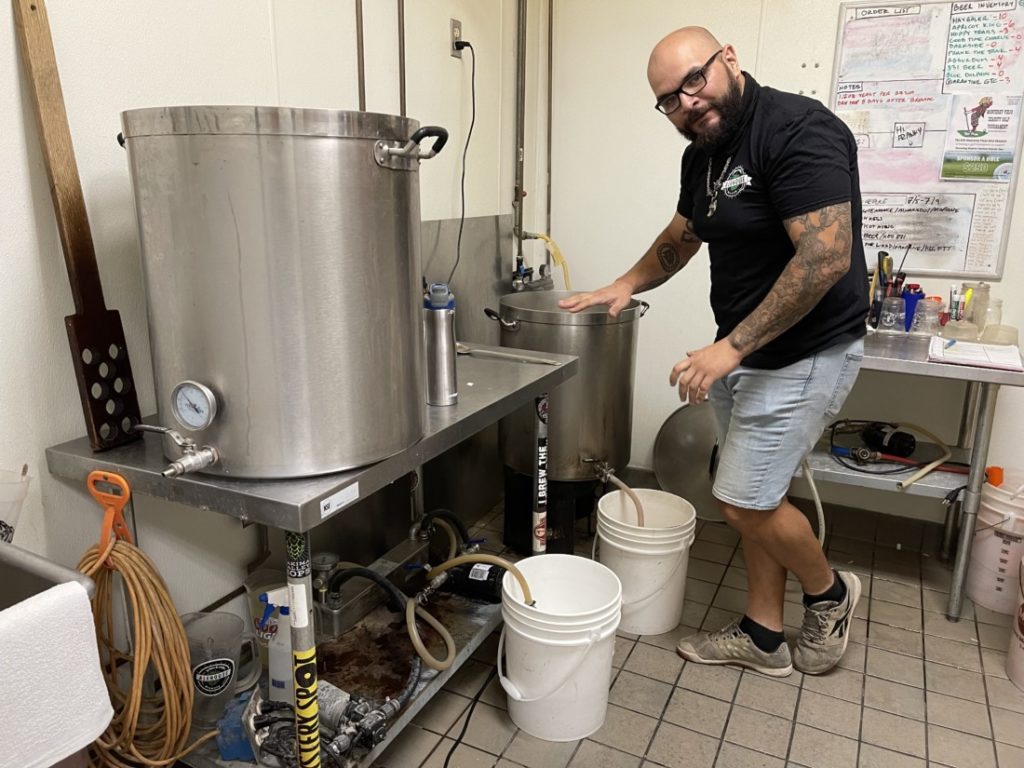 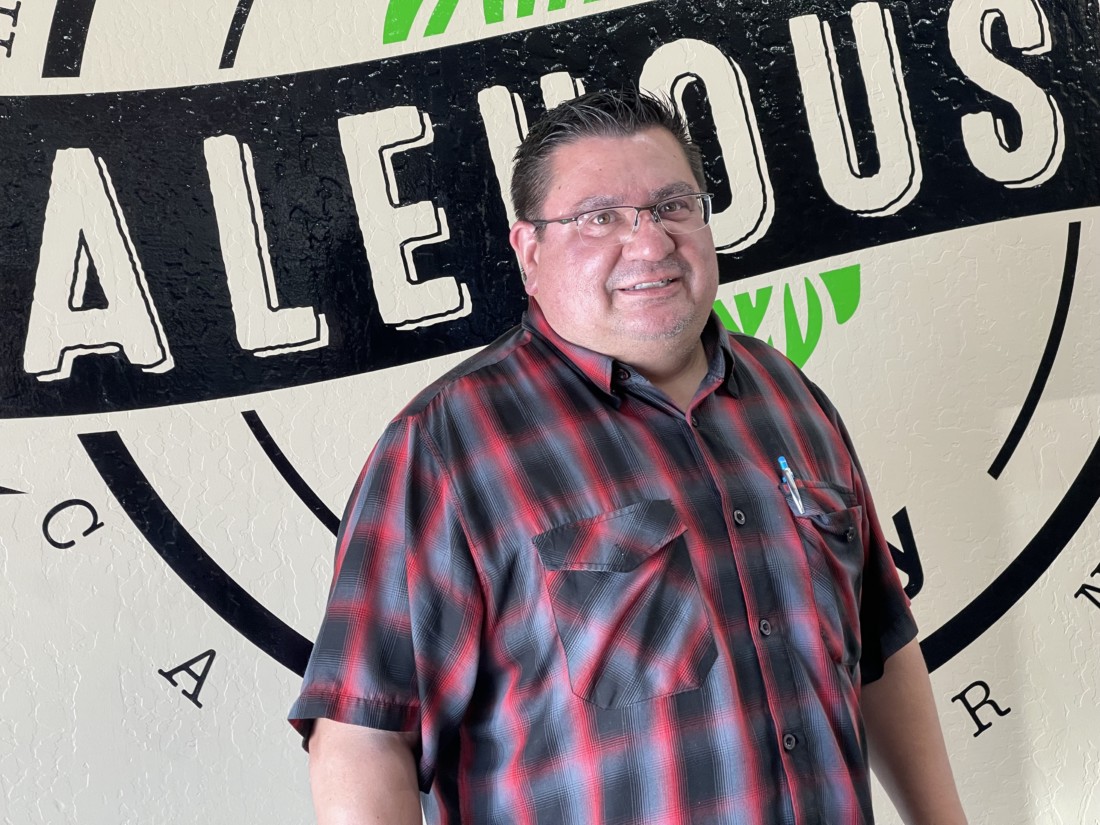 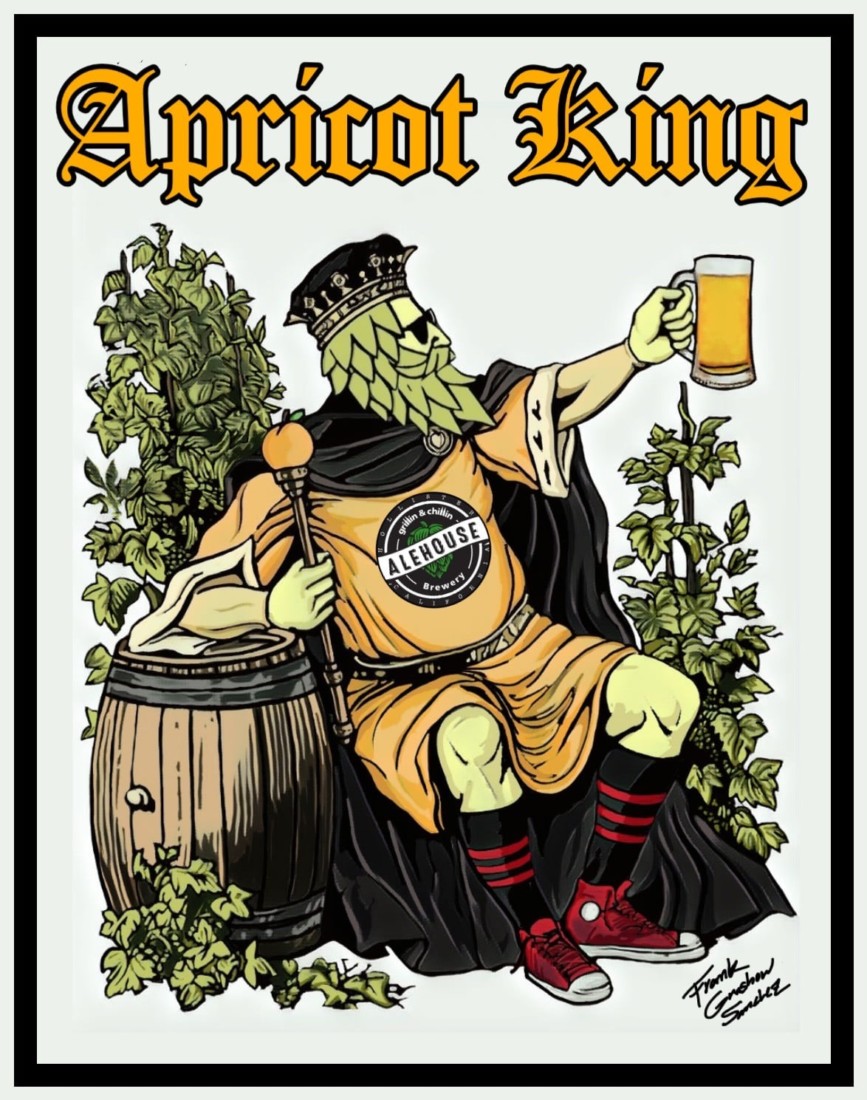 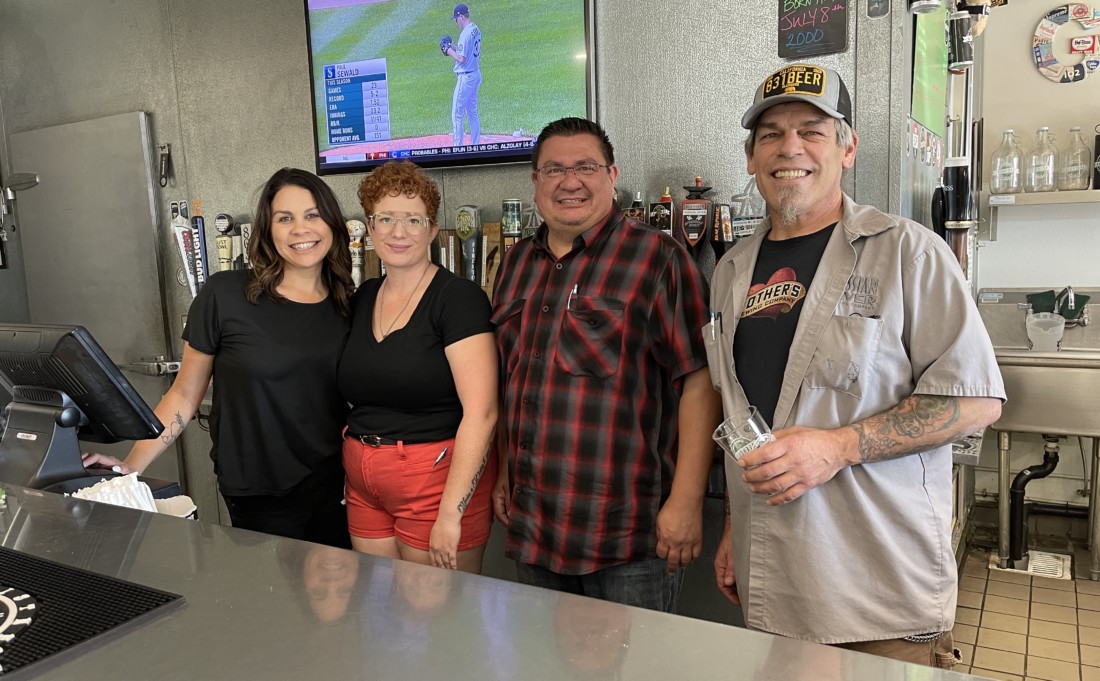 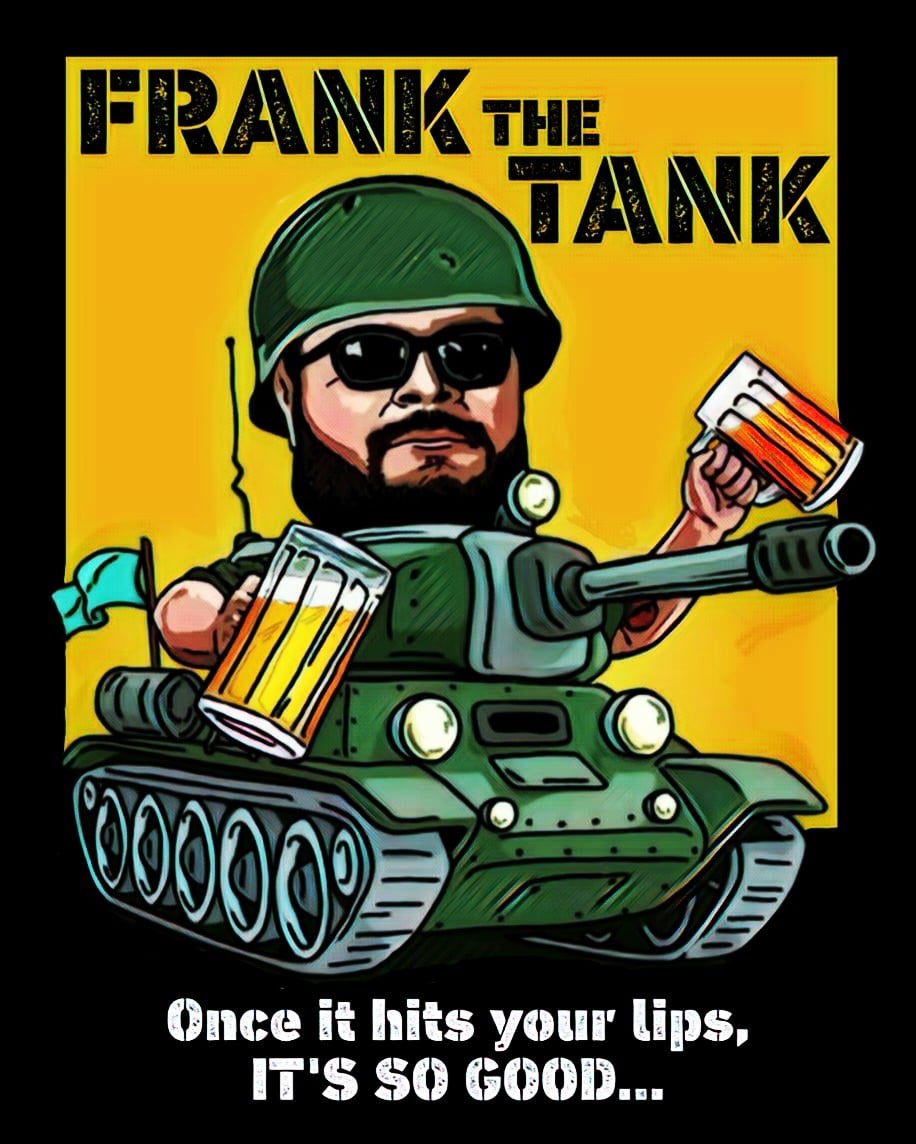 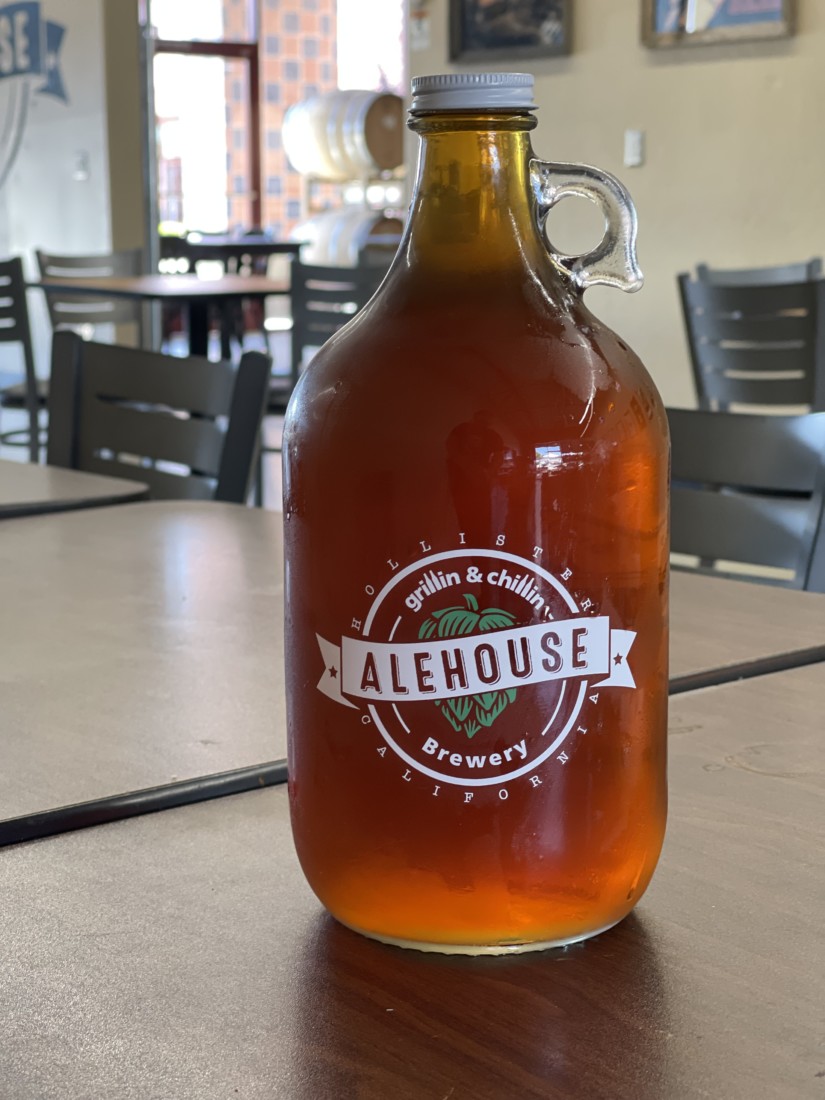 A growler of Chillin & Grillin Beer. Photo by Robert Eliason. 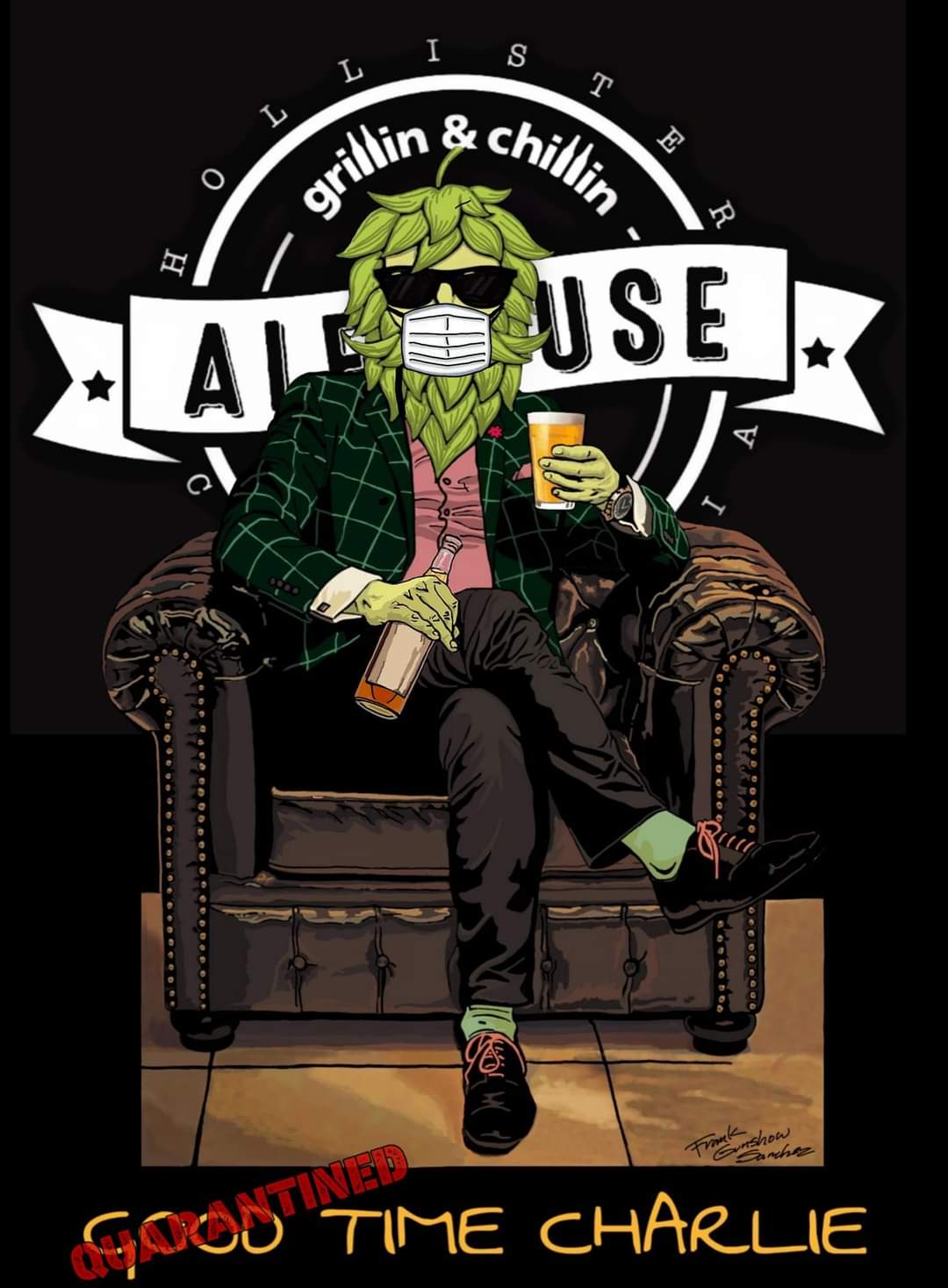 Chuck Frowein is all smiles as he makes his way through the dining room at Grillin & Chillin Alehouse in Hollister, stopping at tables and greeting regular customers by name. He is so obviously relaxed and enjoying himself that it’s hard to imagine him in the suit and tie he wore when he managed chain stores such as Circuit City.

Frowein clearly loves his customers, his employees, his restaurants, and his job—and he loves the beer he makes, too.

Frowein opened the Grillin & Chillin Roadhouse in 2009, at the intersection of Highway 156 and Union Road. The menu remains a mix of burgers, steaks, seafood and sandwiches, but at first, he only had 13 beers on tap. They were run-of-the-mill brews like Coors and Bud Light, which is all his distributors thought he could manage.

“I told them I wanted something other than the traditional beers,” he said. “I wanted Stone Arrogant Bastard, New Belgian, Sierra Nevada—and they told us they wouldn’t sell them to us. They said, ‘You’ll never be able to sell it and you’ll end up with expired beer we won’t take back.’”

Frowien insisted, guaranteeing he would eat (or drink) any losses, and the distributors relented. At first his customers were wary, but they soon began to forsake their old favorites for something from Chillin & Grillin’s ever-expanding beer list.

“We had people try the beers and would not be sure if they liked it at all, but the next time they came in they would say ‘I had an unusual beer here last time, I think called Arrogant Bastard? But I kinda liked it.’ And our sales on the craft beers kept growing and growing until we had 30 on tap.”

Frowein still sells the big-brewery beers, which he says helps pay the bills and allows him to experiment with his own beers, as well as advocate for the craft beers he loves.

“If they want to buy it, I will sell it to them,” he said. “People can be fiercely loyal to their brands. But it gives us a chance to show them something different and say ‘try this.’ And once you go down that rabbit hole to craft beers you won’t go back.”

As the business grew, two more locations were added, with one on San Benito Street (now closed) and the Chillin & Grillin Alehouse, at 401 McCray Street, which opened in 2013. Between the three locations, there were almost 100 beers on tap.

Part of the reason for opening the Alehouse was to provide a location for brewing beer. They currently produce 15 barrels a month. Haybaler Blonde is their most popular and makes up 80% of their production. There is still time during the week, however, to brew enough to keep half a dozen beers in stock at all times, with the choices varying during the year.

His current brewer, Frank Sanchez, has worked at the alehouse for five years now. Besides mastering Frowein’s tried and true recipes, he has added two of his own to the menu, including Frank the Tank, which we tasted.

“I was a regular customer and one day Chuck asked me if I wanted to help him make beer,” Sanchez said. “I had never made beer before and I just walked in cold. I pretty much learned my way and by the second day I was on my own.”

At the moment, the beers are available only at the roadhouse and alehouse locations. The interior of the alehouse is a mix of a bar area, a large dining area, and oak barrels on racks, with the beer being made in a small room behind the bar. The walls are decorated with the original artwork that Sanchez designed for beer labels. There are also framed portraits of past employees along with a wall dedicated to three large photographs of master winemakers Mike Waller, Al DeRose, and Cory Waller, who are regular customers and friends of Frowein.

Frowein has recently decided to step up production, buying several new stainless steel tanks that will allow him to produce enough beer to offer to local taphouses. He is also expanding the kitchen and planning other improvements. Though still recovering from a broken wrist and fractured hip, he shows no sign that it slowed him down at all.

“To me, beer making is stress relief,” he said. “It’s rewarding—you get to come up with new beers and then you get to watch people try them. It helps inspire us in what we are doing.”

Frowein and I sampled seven beers over lunch, as I tried my best to make inroads into one of the alehouse’s two-pound baked potatoes stuffed with tri-tip. Spoiler alert: it was delicious but I could not finish it.

The Beers of Chillin & Grillin Roadhouse and Alehouse

831 Beer (4.5%) Though the name is lifted from the local area code, an obvious nod to Firestone Walker’s immensely popular 805 beer, this beer’s taste is lighter in hops with a citrusy aroma and taste. It finishes with a little kick of tartness. It shares characteristics with most of the beers we tried—smooth as silk, light on hops, and very refreshing. It matches Frowein’s personal taste in beers rather than what might be driving the market at the moment. “You see a lot of people just making hazy beers or fruit beers, he said, “but I am a fan of clear beers. I enjoy the other kinds of beers and we have done them sometimes. If I have to pick one to drink, it is going to be a clear beer, but the best beer is always the one you have in your hand.” For some reason, a strong desire for onion rings came over me as I drank this one—they would be perfect as an accompaniment.

Haybaler Blonde (6.1%) The most popular of Chillin & Grillin’s beers, Frowein considers this ale their flagship beer as well. “My thought was, ‘Give the community what it wants,’” he said. “It is very similar to the 831 but higher in alcohol. A good everyday beer.” Though there are more hops used in this beer, the additional alcohol tones it down and makes it a bit sweeter. It lacks the sharp citrus taste of the 831 which, I think, makes it a better match for main lunch or dinner courses. Frowein suggested pulled pork sliders to go along with it. I think it would be very good with a medium-well burger and some potato wedges.

Apricot King (6.1%) The fruit was originally sourced from Apricot King in Hollister, hence the name. But when that source became unavailable, apricots from B&R Farms in Hollister replaced them. This is the Haybaler Blonde with frozen apricots added in the secondary fermentation. The aroma is abundantly apricot but the taste is much more subtle, with the fruit taste coming in somewhere in the middle rather than asserting itself at the beginning. The apricot does not overwhelm the beer flavor at all, but rather it holds back. It’s a charming beer all around.

Frank the Tank (5.5%) This pale ale is named after Sanchez and is the first beer he created on his own. “It is a lot hoppier than the previous beers,” Frowien said, “but not to the point where it is enamel-eating.” This is a slightly denser beer that drinks well. To me, the hops were not as assertive in the drinking as Frowein suggested, but it ends with a strong, hoppy snap for a nice bitter finish. Definitely made for heavier foods, like a fully loaded pizza or heavily spiced meats, though it would go well with fried dishes like taquitos with guacamole.

Hoppy Trails (6%) A pale ale Frowein described as similar to Frank the Tank. It has a different profile, though, using six different hops to produce a good strong hops flavor but without Frank’s kick at the end. “The types of hops you use and when you put them in makes a big impact on the beer,” Frowein said. “But we try to keep them from overwhelming the flavor. We want all of our beers to be easier drinking beers so you can comfortably go for a second one.” I have to agree—this is an inviting beer that you could relax and drink without it exhausting you with bitterness. To me, it’s a coin toss between this and Frank the Tank; if I were drinking them both I would start with this one.

Absurdum Red (5%) Frowein is a member of the benevolent fraternal organization E Clampus Vitus, whose motto, “Credo Quia Absurdum,” translates to “I believe because it is absurd.”  Absurdum was also the name of a band made up of local Clampers and this beer is a tribute to them. Frowein describes it as being on the borderline between a Red IPA and a Red Ale and I would call it an ale. The hops are clearly stated at the beginning, then fade to the finish with a silky mouthfeel throughout. It would be a nice beer to relax with over a bowl of toasted salted almonds. There is a lot going on with this creamy beer and I think it might be my pick of the day.

Quarantined Charlie (12%) In pre-COVID times, Frowein brewed a beer called “Good Time Charlie.” As a nod to the shutdowns and the increased consumer demand for alcohol, Frowein created this beer by taking Charlie and adding wood chips that were used by Fog’s End Distillery in making whiskey. Compared to the other beers we tasted, this one goes in a different direction entirely, with an unusual mix of flavors and a much greater alcohol punch. The addition of the residual whiskey in the chips kicks up the sweetness, punches down the hoppiness, and gives it a fruity-floral aroma. The result is a beer that dances in your mouth as it tries to decide if it’s a beer, a liquor, or perhaps even a champagne. I loved the playfulness of this one, and it was certainly the most unexpected and fun beer we had. But it’s a cautious love: while it drinks effortlessly and might tempt you into a second glass, the high alcohol content of this beer should be considered. This is Frowein’s favorite of the beers and worth checking out. 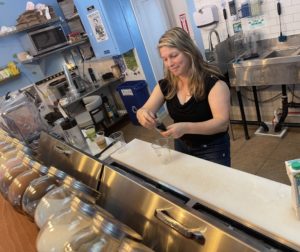 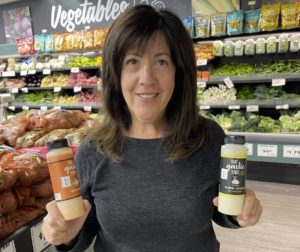 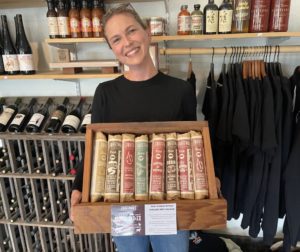