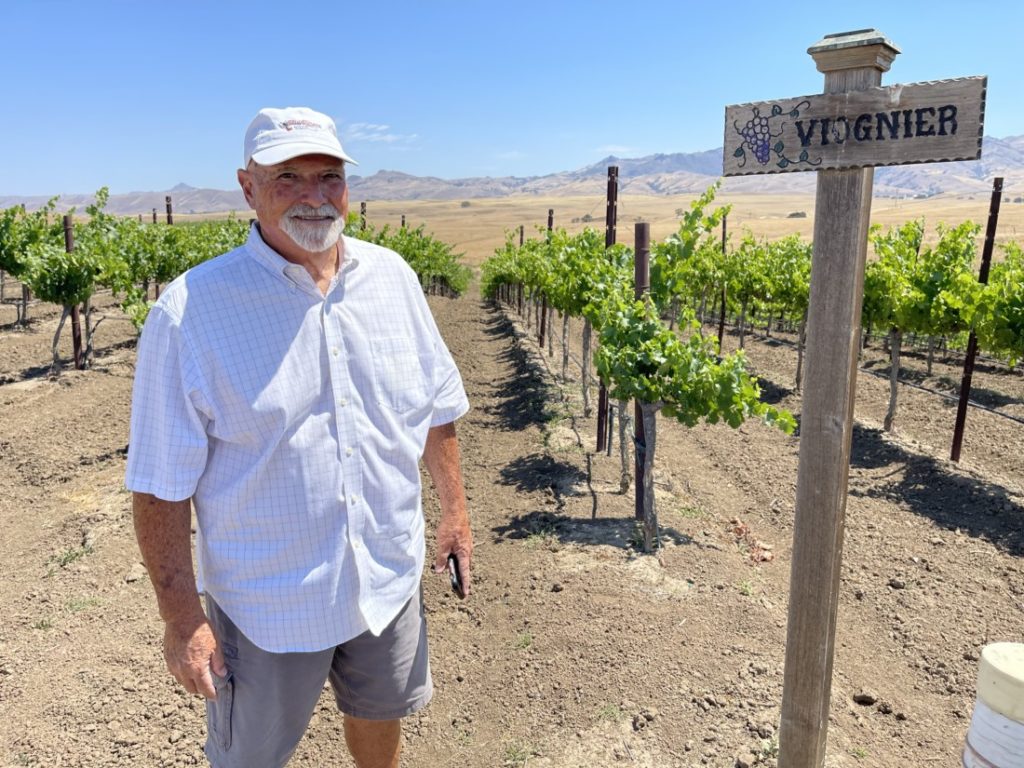 Al Guerra in his vineyard. Photo by Robert Eliason. 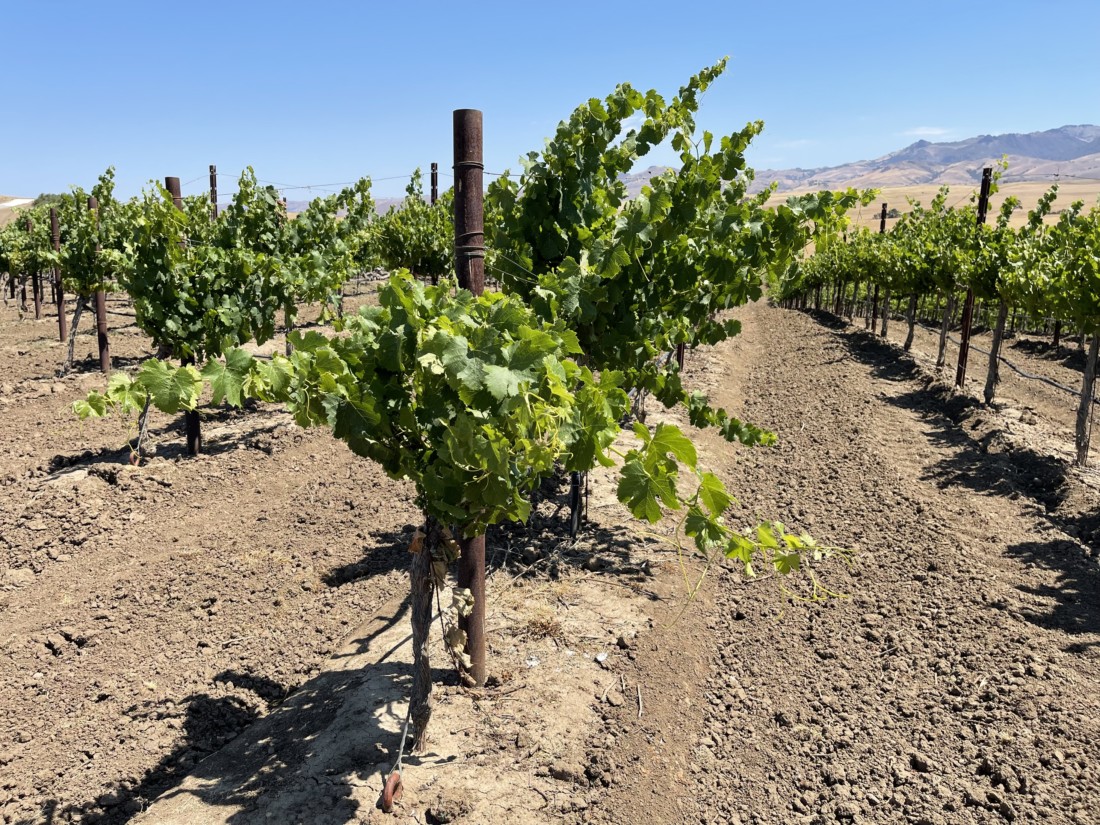 Following their May 3 reopening and first amphitheater concert of the year on June 18, Guerra Family Cellars is entering summer with a renewed energy—and some really great new wines—at one of the most beautiful settings in San Benito County.

“We had a decent season last year,” said Al Guerra, “but we can always hope for a little more. We had a great turnout for the concert, we are doing well with our wine club, and I think we will do very well this season. We have had great feedback so far.”

Located just off Fairview Road with an entrance at 500 John Smith Road, a long dirt road takes you down to the tasting room which has an unobstructed view of the hills and mountains south of Hollister. It’s easy to imagine you are in a place far distant from the city as you drink wine surrounded by the natural beauty and tranquility of the area; it is a brief vacation just a few minutes from the hubbub of the town.

“All of the tasting rooms in town are different,” Guerra said. “But this is what we have to offer. Dusty roads. No air conditioning. And it’s not open all the time. But you are going to get something good to drink and something very special to look at while you drink it.”

Guerra “Attitude” wines have limited distribution, and the winery depends on its wine club members, online orders, and sales at their tasting room. Club membership comes with a 30% discount on wines and a 20% discount on concert tickets in a reserved area.

“We have a very loyal wine club,” Guerra said, “and we are also starting to sign up a lot of the new people who are moving into town, which is fun. We think our wines continue to be of very good quality and our customers seem to agree.”

Guerra also sells a lot of wine at their concerts, one of the few large venues in the county for music. The performers are almost exclusively national touring cover bands and the events this year are being catered by San Juan Bautista’s Blazin’ Bayou BBQ.

“We did a lot of improvements to the amphitheater this year,” Guerra said. “Some of the people might not notice, like we are hooked up for electricity rather than using generators. But there are other things, like redoing the stairs at the venue, that are getting positive responses from our customers.”

Guerra debuted its current wines at a May 22 wine release party. They rely, as always, on the strengths of the Guerra Family Vineyards, which you drive through on the way to the tasting room: acres of petite sirah, malbec, cabernet sauvignon, and viognier.

“We like to stick with just our estate-grown grapes,” Guerra said. “We do get some grenache and sirah from Leal for our 3 Sisters blend, which is becoming more popular, but otherwise we just continue making the same wines we have been making for the last 10 years.”

While the winery does not produce a pinot noir, unlike most of the local wineries, Guerra had kind words for the passing of the “Prince of Pinot Noir,” Calera’s Josh Jensen.

“Josh was an icon, really,” Guerra said. “He was a cool, friendly guy and I enjoyed spending time with him. But he was a humble guy and I don’t think he knew what he meant to this region. Winemaking was his life and his passion, and here we are with winemaking just as a hobby. But he would come to the concerts—he’d seek us out and give us compliments. It felt like playing with the pros.”

2021 Attitude Viognier ($35) This is the only white wine Guerra produces and it is a showstopper. The aroma is a fruity acid reminiscent of fresh-cut grass. The taste brings a light acidity that melts into hints of tangerine and apple blossoms. The wine melts in your mouth, with a slightly lingering sweet and citrusy aftertaste. Aged in stainless steel and finished in oak, this has some of the notes of a fine chardonnay: crisp and bright with just enough French oak to give it a bit of body without being weighed down. This is a perfect afternoon wine on a hot day, and I would prefer just to sip it on its own rather than have the subtle complexities masked by food. Delightful.

Attitude Cabernet Sauvignon ($44) Some cabernets lean over backward to try to be more like zinfandel, but this dense cabernet relies on strong tannins for aroma and substance. The wine fills your mouth with the taste of rich peppers and dark fruit riding on a base of oak, with a slightly lingering aftertaste. It demands your attention and would stand up to any spicy or heavy foods you want to serve with it—food with its own strong notes, like pasta with tomatoes, garlic, and hot sausage or a grilled and seasoned New York steak. Perfectly drinkable on its own, but I think it cries out to be served with food.

2015 AttitudeMalbec ($46) The aroma of the malbec is a light mix of earth and wood but the taste is rich and inviting. It’s less full-bodied than the cabernet but still holds its own. In some ways, this is a perfect example of the Guerra wine bottling philosophy: they release them when they are ready to drink, without further aging needed. And the idea of producing a malbec, rather than offering up another San Benito pinot noir is also perfectly Guerra, making the wines they want to drink and then sharing them with customers. I said in my review of their malbec last year that I would not hesitate to bring this to dinner without knowing the main course. It’s a flexible and very drinkable wine that would go with almost any main course but would also be great with just a charcuterie board and some good french bread.

Attitude 3 Sisters ($44) This is a blend of estate-grown petite Sirah with grenache and Sirah from Leal Vineyards. There is a slightly woody aroma with a very dry but smooth mouthfeel and a nice lingering aftertaste. You pick up black pepper and dark cherries immediately, but there is an undercurrent of an almost leathery apricot that makes this a fun wine to drink. There is more fruit here than in the other reds and the grenache adds some playful accents to the wine. I said last year that it was a toss-up between this and the malbec as my favorite of the tasting, but this one wins it this year because it’s so unique and distinctive. I would serve this with some rare prime rib with roasted vegetables but it would be just as nice with a simple bowl of minestrone soup.

Tasting room hours are Saturday and Sunday from 1 p.m. to 5 p.m. Contact the winery at (831) 902-9106. Information about upcoming concerts is here. There are four concerts remaining in this year’s series. 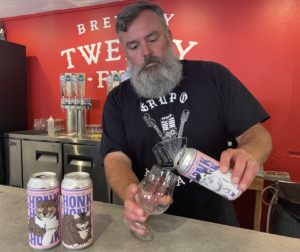 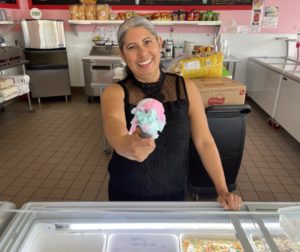 The Hollister ice cream parlor innovates as it maintains its high quality and fresh ingredients. 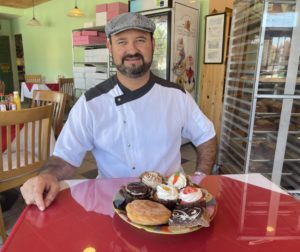