Answers to frequently asked questions about the ballot measure for a proposed autonomous vehicle testing facility along Highway 25.

Strada Verde Land Use Plan. Image from the Initiative. 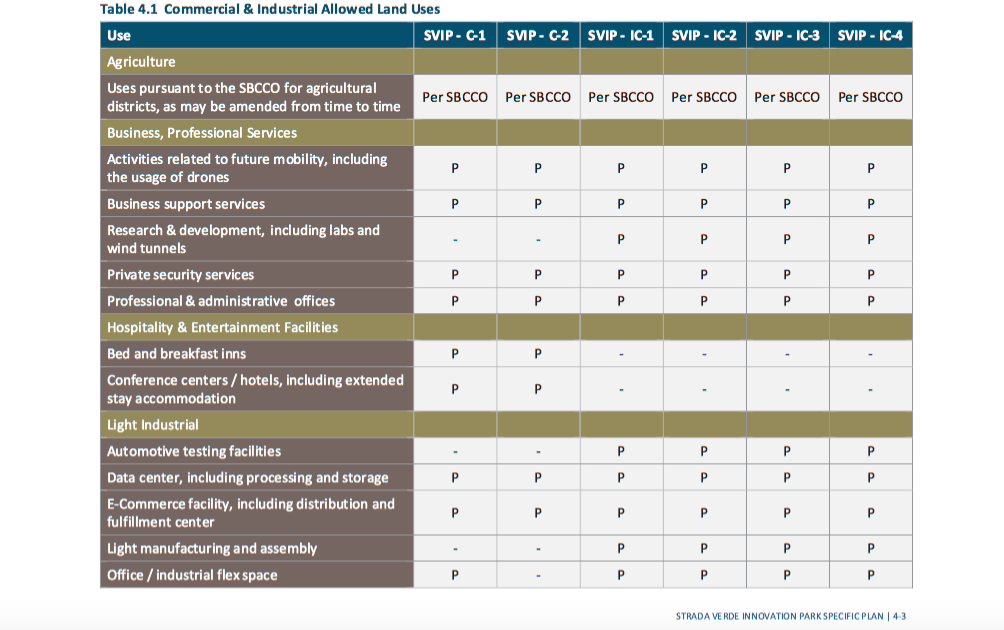 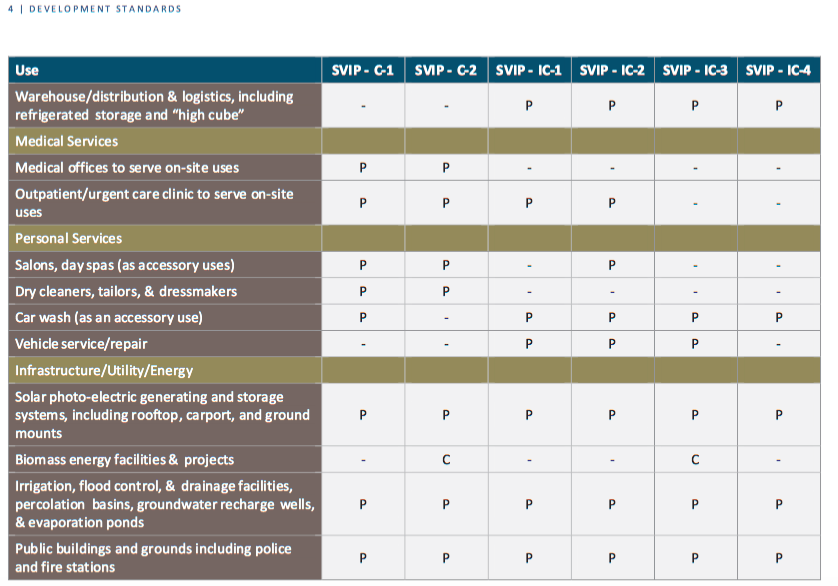 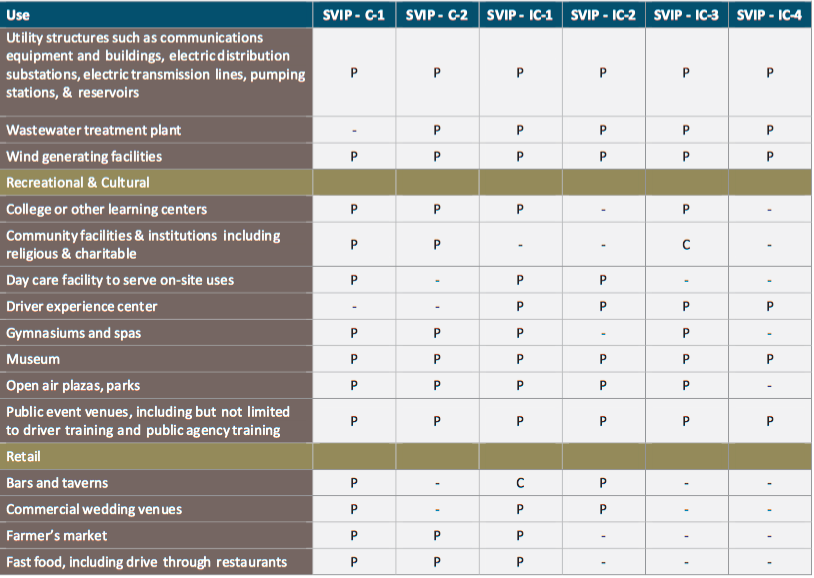 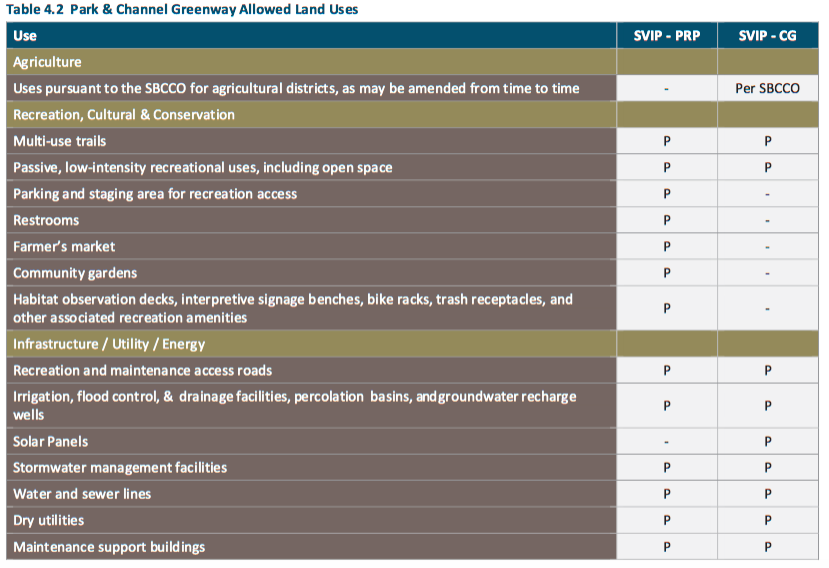 Watch representatives on both sides of Measure N answer questions from the BenitoLink 2020 Virtual Election Forum.

What is Measure N, the Strada Verde Initiative?

Permitted uses within the specific plan include:

The specific plan defines “innovation centers” within the project:

Two commercial areas are also defined in the specific plan:

The project is “anticipated” in phases, with the initial phase being the 560-acre agriculture area, Innovation Center No. 4 and a portion of the business center.

The height limit for buildings varies from 25 feet to 55 feet by project area, with the highest buildings allowed in Innovation Center No. 1.

Strada Verde will be largely powered by solar energy, incorporating an onsite, large-scale solar generating and battery storage station, and have rooftop photovoltaic power, according to the initiative.

If the initiative is approved by voters, the project will be required to construct a new Pajaro River Park consisting of 209 acres of open space along the western boundary of the project. According to the initiative, 153 acres of the open space will be for public use including a 2.4-mile, multi-use trail and wildlife observation area adjacent to the river, and a preservation area for native plants and wildlife.

The park will be permanently preserved, managed and made accessible to the public by the project applicant, and it will replace part of the existing agricultural uses.

Though the project proposes a 562-acre area that will be exclusively for agriculture uses, “agricultural uses are permitted throughout the Specific Plan Area, with the exception of the Pajaro River Park.”

The specific plan also states “future development . . . may result in the conversion of land that has been previously designated ‘Prime Farmland.’ In this event Project Applicant(s) shall comply with the requirements of the San Benito County General Plan and the SBCCO [county code] with respect to ‘Prime Farmland,’ as may be amended from time to time.”

The initiative also amends the general plan to remove a future extension of Shore Road to Betabel/Highway 101 through the Strada Verde area. It can only be amended by voters within the first 20 years of being implemented.

The project will include a two-lane access road connection with the Betabel interchange at Highway 101 that includes a pedestrian/bicycle path on one side and “informal low-maintenance” landscaping on both sides.

The conceptual design of the street network includes two connectors to Highway 25 at the northern and southern ends of the project. The specific plan states the connection to Highway 25 “serves as either an emergency access road or connector road” with a soft shoulder on each side. According to chapter five of the specific plan, the emergency access road would be used only in case of emergency.

Table 3-2 of the specific plan addresses converting the existing farm road connecting to Highway 25 to an emergency access road for “emergency egress,” and includes a “Frazier Lake Road Extension” to be built following completion of the initial phase of construction. The extension includes a new two-lane road that connects the project to Highway 25.

Additionally, the plan also states the long-range goal is to connect Y Road to Highway 25 at Bolsa Road, which would be funded by the estimated $18 million impact fee the applicant would pay to San Benito County.

In addition, the specific plan indicates that it’s the applicant’s responsibility to acquire any offsite property not owned by the applicant necessary to build this connection through an agreement “or by way of any alternative means authorized by applicable law.” This includes eminent domain—the right of government to take private property for public use at a fair compensation.

What does voting yes on Measure N mean?

A vote in favor of Measure N means support for amending the San Benito County 2035 General Plan to designate 2,777 acres of agricultural land to the Strada Verde Specific Plan.

What does voting no on Measure N mean?

A vote against Measure N means not supporting the amendment of the San Benito County 2035 General Plan, leaving 2,777 acres as agricultural. No commercial development would be permitted within that area related to the measure, but could go through the normal permitting process.

Where would Strada Verde be built?

The project is proposed for the unincorporated area of the north-western edge of San Benito County. It’s located along Highway 25 and the Pajaro River.

The current zoning of the area is agriculture productive and agriculture rangeland, and includes about 800 acres within the 100-year floodplain adjacent to the Pajaro River. The project also overlies two aquifers.

According to the initiative, 600-800 acres of the area, largely within the floodplain, are actively being used for organic farming near the Pajaro River. The majority of the area consists of uncultivated agricultural land and has not supported a profitable agriculture use in the last 40 years.

The area contains agricultural support buildings and no permanent residences.

What are the labor impacts?

According to the initiative, it estimates Strada Verde will create direct, indirect and induced employment for over 18,000 workers during the construction phase.

It also estimates the project will create direct, indirect and induced permanent jobs for over 5,500 people.

What fiscal impacts does the project have?

The report notes that the county would spend about $2.8 million to provide public services such as police and fire.

During the construction phase, these entities would receive the following estimated revenues:

Additionally, the project would result in $2 million annually in unsecured tax revenue distributed among the county, cities, schools and special districts.

Is an environmental impact report required?

According to the initiative, “all future discretionary actions required for development within the Specific Plan Area are subject to environmental review in accordance with the California Environmental Quality Act (CEQA).” This includes any required mitigation measures.

The county counsel’s impartial opinion differs from EMC Planning Group’s report that states that if Measure N is approved, there would be many uses allowed by right without discretionary approvals by the county. EMC’s report, however, did not specify what uses under the initiative would not need further approvals.

How is the project impacted by the Trical buffer zone?

The San Benito County General Plan sets a 2.5-mile buffer zone between sensitive land uses and commercial facilities that handle bulk industrial or agricultural chemicals, and a case-by-case buffer for all other commercial facilities that handle bulk-scale amounts of regulated hazardous chemicals. The Strada Verde Initiative does not directly address its impact or if it’s impacted by the Trical, Inc. facility located next to the project area near Highway 25 east of the Santa Clara County line.

Similar land uses, however, are addressed in the initiative in finding No. 13 which states: “The provision of this initiative, including the adoption of the Specific Plan, the uses permitted it the Specific Plan Area, and the location of those uses in relation to each other and to existing neighboring agricultural, industrial, and/or commercial uses (including but not limited to facilities that conduct bulk-scale receiving, unloading, handling, blending and/or loading of industrial and/or agricultural chemicals regulated as potentially hazardous by the state and/or federal environmental protection agencies), are in the public interest and are consistent with the General Plan, as amended by this initiative.”

Does the applicant need approval from the county before construction?

Yes, approval from the county is required for: