Week-long event is a tradition at SBHS 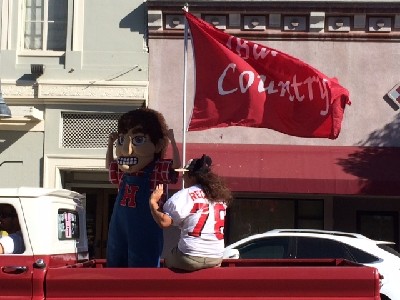 Homecoming is a tradition held in many high schools, colleges, and universities. It is usually centered around a football game, but that is just one of the many events held during Homecoming Spirit Week at San Benito High School.

The week before the Homecoming Dance, there are Spirit Days. SBHS kicked off its Spirit Week on Oct. 20: Monday was Pajama Day, Tuesday was Hippie Day, Wednesday was Twin Day, Thursday was Fashion Disaster Day. And Friday was Class Spit Day.

The annual Homecoming Parade was held on Oct. 24. It featured club and class floats, for which the seniors took first place. In the club category, the French Club took first place. "The French Club was the best," said Yarely Gonzalez, a member of the club. "I like the culture, and plus I'm part French. I feel like I should learn."

Velocity Dance Crew members Yiajaira Gonzales, Mixi Chavira, and Alondra Gonzales were also part of the parade. When asked who helped create the float, Chavira said, "All of us pitched in." Even though Velocity had nearly 50 people and not everyone could get on the float, the girls said it was fun to be part of the parade. Chavira also stated that the crew was like a "second family."