Co-produced by two prominent California women, the plays centered on the mission's rich and vibrant past 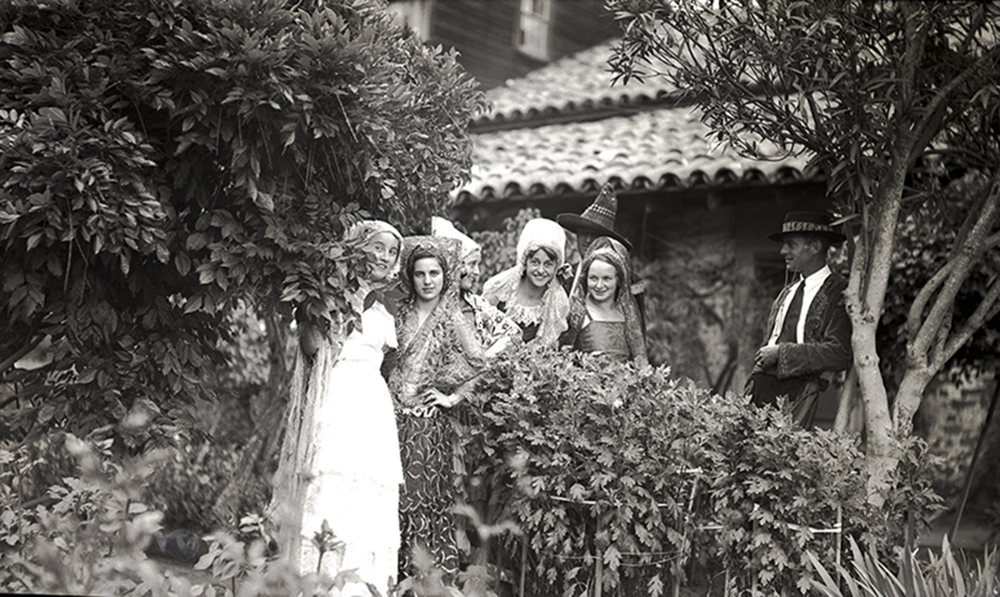 In June 1938, thousands of Californians began a trip north or south along El Camino Real, “The King’s Highway.” Whether they traveled by train, car, or on foot, an ebullient mood fueled their journey to a shared destination with a singular purpose—watching the famed Mission San Juan Bautista Pageant Plays that had become synonymous with California’s 15th mission.

McGettigan explained to an assembled audience at the Casa Maria on Sat. Feb. 13, that the first mission pageant was performed in 1929, organized as a fundraising event by then-parish priest Francis Caffey as a salve to what he described was a “decaying mission.”

Two prominent California women heeded Caffey’s call for help, collaborating on four of the pageant plays performed over the next 12 years.

Over her lifetime, Francisca C. Vallejo composed over 1,000 songs and several operas. She wrote poetry, too. Dubbed the “Voice of California”, she hosted a San Francisco radio program where she interspersed tales of California with her music.

McGettigan’s connection with Vallejo is deeply personal. (Vallejo was her paternal grandmother.)

In an email to BenitoLink, McGettigan explained that she gained possession of her grandmother’s music collection while working at The American Music Research Center (AMRC) at Dominican University in San Rafael in the 1970s.

The center was started by the late Sister Mary Dominic Ray in 1958. Upon her retirement, the collection was sold to University of Colorado, Boulder, according to AMRC’s website.

As details of the transaction were finalized, AMRC’s new director decided that Vallejo’s work would remain in California with McGettigan, who didn’t waste any time poring over the boxes of material.

Among the items McGettigan discovered were the Mission Pageant's scripts, compositions, and programs.

Typically scheduled for the third week of June, the performances coincided with the mission’s founding date, June 27. A compilation of music, song, and dance, the pageants celebrated the mission’s history, while providing much needed revenue for its longevity.

Accompanied by a orchestra and dancers, each play’s ensemble included anywhere from 100 to 150 actors, according to McGettigan.

Some performers, like Will Rogers Sr., Bing Crosby, and Irene Duncan, were drawn from Hollywood. Others were recruited from theater classes at Santa Clara University and San Jose State College. However, most were locals with little to no acting experience.

Rehearsing for such a grand production was a challenge, as the cast was scattered across California. With no other option, performers practiced their lines, learned their notes, or danced their numbers before arriving in San Juan Bautista, while news of the upcoming pageant carried the day.

On Wednesday, June 18, 1941, The Berkeley Daily Gazette ran the headline, “Pageant-Play Will Be Given.” The play scheduled for Sunday, June 22 was entitled, ‘“ ‘Lilies of Madonna,’ a three-act drama built around an episode in the life of Father Estevan Tapis, one of the early Franciscan padres, who lies buried in the sanctuary of the mission chapel,” according to the article.

As the pageant play approached, people took to the El Camino Real—the road that led to Mission San Juan Bautista.

Almost overnight, the quaint mission town burgeoned into a city of thousands. (In June 1938, a record number, 12,500, arrived.)

Over the next few days, a festive air permeated the mission’s dilapidated environs and the town’s aged streets pulsed with activity.

Dance halls filled. Rodeo fans hooted and hollered. Those who had worked up an appetite feasted on chicken and beef barbecue. Polo players wowed spectators with their horsemanship. On-lookers watched wooden carts languidly make their way through a parade. And on Sunday morning, a multitude of church goers celebrated mass outdoors, as the largest nave of the California mission system was too small to accommodate the congregation.

After church services a grandstand erected in front of the mission church shook with excitement, a sign that the pageant play’s matinee was to begin. (A second performance was scheduled later that evening).

As actors uttered words crafted by Lucy Cuddy and an orchestra played notes composed by Francisca C. Vallejo, Mission San Juan Bautista’s past came alive through pageants like, "Juanita of San Juan," “Dolores and Jose” and “The Bells of Orizaba.”

McGettigan’s research has focused on women from the Vallejo side of her family tree, including Francisca C. Vallejo.

The 33rd Annual California Missions conference gave the independent historian a timely venue to introduce people to her grandmother and to the famous Mission San Juan Bautista Pageant Plays she co-produced.

“The conference provided the perfect stage to get the story out,” she stated in an interview with BenitoLink following her 20-minute presentation.

Books often serve as conduits to understanding history. But as McGettigan pointed out, it can also be learned through “music, song, and dance.”