In an effort to sway the public away from Hollister mayor's attempts to stop development of 400 Block, group proposes its own petition in support of development 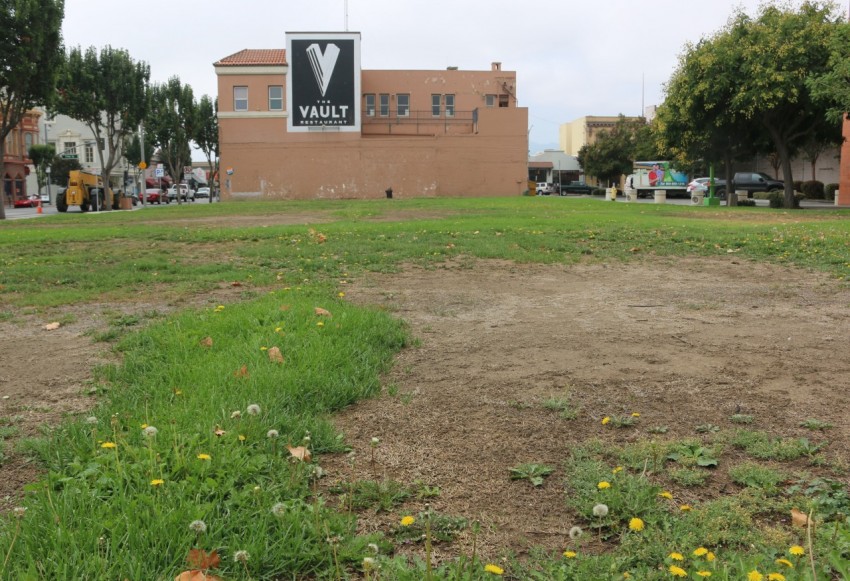 The 400 Block has remained empty and unkempt, for the most part, since buildings were destroyed in the 1989 Loma Prieta Earthquake. Photo by John Chadwell.
×

Business Council President Bob Tiffany penned a request for the organization’s members to sign the petition, with a goal of obtaining 3,000 signatures. As of 5 p.m. Thursday, 209 supporters had expressed their support on the site.

“For 28 years, since the Loma Prieta earthquake, the corner of 4th and San Benito Streets – the “400 Block” – has sat empty,” Tiffany wrote in the membership newsletter. “After many stops and starts over those years, we finally have a viable project to fill that significant hole in our downtown. And it’s not just any project…this is an outstanding development that will include both a mixed-use affordable housing/retail component (built by local builders) and a wonderful Philanthropy Center…that will house the Community Foundation, United Way, CASA, Emmaus House, and the Hollister Downtown Association, among other community non-profits.

“Sadly, although the project has been unanimously approved by the Hollister City Council, it has fallen under attack by a relatively small, but very vocal, group of people…often egged on by a whole lot of misinformation. It’s time that the City Council heard from all of the many citizens, non-profits, and business people that are passionately in support of the 400 Block project!”

As recently as the Aug. 7, during a Hollister City Council meeting, the 400 Block was being discussed in closed session. Velazquez, who owns property just south of the 400 Block, was excluded from the discussion because of his recusals from previous meetings where the topic was on the regular agenda, he said. He also commented that his attorneys, who drafted the petition he championed and personally gathered the majority of the more than 2,400 signatures, assured him that the council did not understand it could not stop him in his efforts to force a referendum to reverse their decision to develop the land. When the other council members came back in chambers, the city attorney reported no action was taken.

In his message to fellow business owners, Tiffany asked them to sign the petition to show their support, to “LIKE” the project on Facebook, and to send the petition link and Facebook page to their friends and associates to let them know of their desire for the city to move forward with the development project.

Kristina Chavez Wyatt, executive director of the Business Council, commented via email to BenitoLink: “Opposition, delays to Re-Storing the 400 Block are hurting those who are suffering in our community, those servants and their organizations who are transforming our community. This issue is unnecessarily causing turmoil in a critical time when we are seeking to create local jobs, career opportunities, grow local businesses, attract investment and bring more affordable housing to our community. Though the Philanthropic Center the Community Foundation for San Benito will help convene diverse voices to address local issues and opportunities in order to connect, build and help transform our community.”

Taking a page out of the mayor’s playbook, the Business Council is also attempting to draw attention to its views and gain support from residents. While some who responded to Velazquez’s social media appeals did so with heated and sometimes profane comments and personal attacks, those responding to the Business Council are, for the most part,  more subdued while expressing their support for the petition.

A person identifying himself as Michael K. wrote: “We’re told this would be a good location for an open space. Yet it sits under the shadows of large walls and next to busy traffic, is detached from the businesses and activities that could make it a lively gathering place, and is too small and narrow to become an urban-nature retreat. We’ve seen nearly no one using the lot on a casual, spontaneous basis for years but are told someday heavy foot traffic will surely be attracted. We see almost no Downtown event interested in using the lot yet are told the lot must be kept open for, yes, events. We’re told mobile vendors and services who are seldom seen around Hollister today will descend on the lot in such numbers as to necessitate three-quarters of an acre of the city’s most central land. And we’re told that Downtown has no open space—if we all ignore the four open spaces that Downtown already has. We can follow these unrealistic visions and create a barely helpful park or plaza that depends on programmed activities to add any new life to Downtown Hollister. Or we can restore the site to the built form that is familiar, tried, and true to Downtown Hollister.”

According to Marla P: “Mixed use development in downtown Hollister will help ensure vitality and success of downtown businesses – this project seems well suited to meet the needs of a variety of constituents.”

Cynthia H said: “We now have San Benito Street back, let’s improve our downtown buildings. There are not enough living areas in downtown. The Community Foundation could have events at this location, bring our residents downtown. Some people have never been downtown, this is sad. We have a wonderful community with local families doing business downtown. Building on this vacant lot will create a beautiful building that can be used by our community leaders and the residents they serve. I feel this is a community service endeavor that will help our local commerce, non profit, a host of benefactors.”

Lynn S noted: “To make our downtown more attractive and inviting. We need downtown to thrive. our downtown has been stagnant for too long. I feel this will help tremendously.”

Michael S wrote: “Hollister City Staff and duly elected City Council followed all laws and protocols, without bias or conflict of interest, to restore the 400 Block property to its original, commercially zoned and/or mixed use designation. I support the Restore the 400 Block effort, even though I already voted for my councilman to represent my interests regarding this public asset.”

And Philip G penned: “Downtown needs to move forward. For years, Ignacio Velasquez (sic) has been trying to engineer something in the block to line his pockets at The Vault, and his property kitty corner to The Vault… The fact residents don’t realize his motivations are 100% to benefit his economic interests are astonishing. Please move forward.”

On Aug. 8, Velazquez wrote a comment on the Save Our 400 Block Facebook page: “I just wanted to let all of you know that today I was told that we officially gathered the number of signatures required to be able to vote on Saving the 400 Block. Thank you to all of you that helped by gathering signatures and to all of you that were willing to stand up and make your voice heard! There is still a lot of work to do, but together we can Save the 400 Block!”

When Sylvia Sahagun commented on the Save the 400 Block page that she had seen the Business Council petition floating around and had not signed it, but it was nice to see democracy at work, Velazquez responded: “It’s not an actual petition, it’s just the people that want to build there trying to get support. All the groups that want to see it built are the same ones that are getting hundreds of thousands of dollars each year from the city and the community foundation.”

Recently, the mayor told BenitoLink that the “good old boy network” that has been operating in Hollister for years has been inept and possibly corrupt. He said of the Community Foundation that it wants to build a palace to its own self-aggrandizement, and that it should use the nearly $1 million donation to renovate one of the many empty buildings along San Benito Street. He claims “the people” want a park where concerts can be held, pop-up restaurants can come to town, and kids can play. He said what they don’t want are condominiums and more empty buildings.