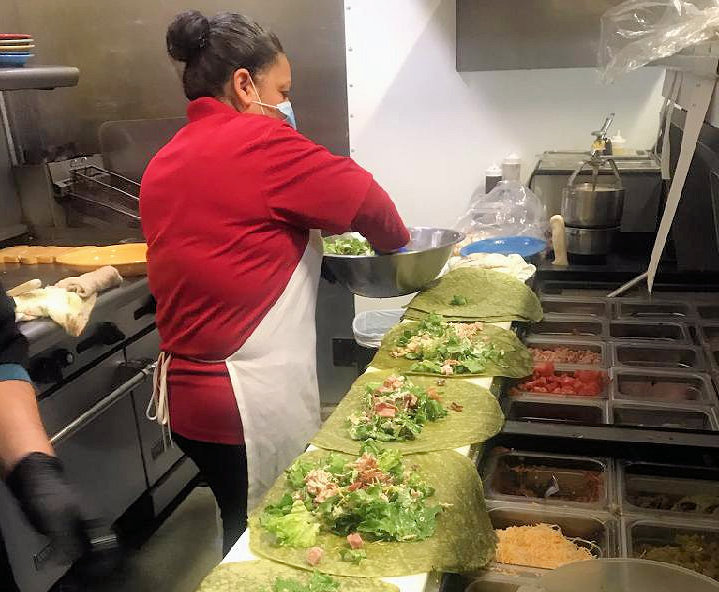 The Great Plates Delivered program is back and the response has been enthusiastic among both the seniors who qualify and restaurants that are participating.

“We are getting about 100 phone calls a day from seniors and 20 or 30 emails a day,” said Ashlyn Archibeque, Great Plates program coordinator for the San Benito County Chamber of Commerce. “They are coming from people who appreciate the program or want to join.”

The Great Plates Delivered program began in California in May and provided free meals to at-risk seniors, sourced from local restaurants and delivered to their homes.

While initially scheduled to last only three weeks, the program was extended several times until it finally concluded in September. According to Archibeque, 38,640 participants across California received 23,626,173 meals in the program last year, delivered from 609 restaurants with 50% of the restaurants being minority owned.

The meal program started again on Jan. 18 and will need to be reauthorized every month, as was the case previously. There was enthusiasm for renewing the program in San Benito County, which required a local organization to do the groundwork.

“The county had offered it to the Chamber of Commerce,” Archibeque said. “The program supports people and local businesses, so we wanted to help. Restaurants are getting cut checks for their participation and they are getting more people than they did last time.”

“It’s a great program for getting our people back on board,” said Chuck Frowein, owner of Relax! Chillin & Grillin. “We’ve been doing about 120 deliveries and it has let us bring back six employees. Not only did we bring people back, but we were able to give out more hours. I had a lot of people working 35-40 hours a week who got cut down to 6-10 hours. So we have been able to get them closer to back to normal.”

Signups have increased from 300 meal recipients enrolled last year to around 500 now. Archibeque contacted previous recipients, offering them a chance to re-enroll as it was opened up to the rest of the public.

“We were busy calling those 300 people,” Archibeque said, “but at the same time, once the media told people about the program, we had another 300 calls from people wanting to join.

Between the previous recipients and the new enrollees, the program is momentarily fully booked.”

Interested residents can still enroll in the program and will be put on a waitlist. Archibeque said Great Plates should be able to accommodate more residents in February.

Eligibility is based on factors such as recipients being 65 or older or considered high risk by the Centers for Disease Control and Prevention, earning 600% or less of the federal poverty limit, and not currently receiving assistance from other programs including CalFresh/Supplemental Nutrition Assistance Program or Meals on Wheels.

Restaurants are reimbursed $22 per meal, including delivery costs. The Federal Emergency Management Agency pays for 75% of the program, with 18.75% paid for by the state and 6.25% paid by the county.

Great Plates recipients get one delivery a day in the morning, with each restaurant responsible for its own deliveries. Previously, County Express handled some of that work. Enrollees are given choices and can order breakfast, lunch and dinner, or individual meals. Most menu items are offered with an eye toward senior citizen customers.

“We try to provide a variety,” said Naomi Ruiz, owner of Flapjacks Breakfast & Grill, “but we are very geared to the special dietary needs for individual clients. We are aware of those who are diabetic or have low sodium diets. We pay attention to any allergies they might have. And we get the food to them early because we are aware that they may be on some medications that must be taken with food. We want to be sure to provide what they need in a timely manner.”

Archibeque said when she approached the restaurants that had participated in the program last time, most agreed to continue. A few more businesses joined up this time, with Farmhouse Cafe being the newest addition.

“They asked us to be part of it again,” said Cindy Clawson, owner of Eva Mae’s Cafe. “We did it the first time and we did very well. Everything is going smoothly—they started us again where we left off in September with 27 customers and they are going to give us more for next week.”

“It is a great service for senior citizens,” Archibeque said. “But more than that, it keeps people employed. It also allows the restaurants to do some networking—we get people calling to ask which restaurants are participating and saying they want to order food from them to show their support. It really benefits a lot of people in the community.”

Great Plates Delivered lends a hand to seniors and restaurants