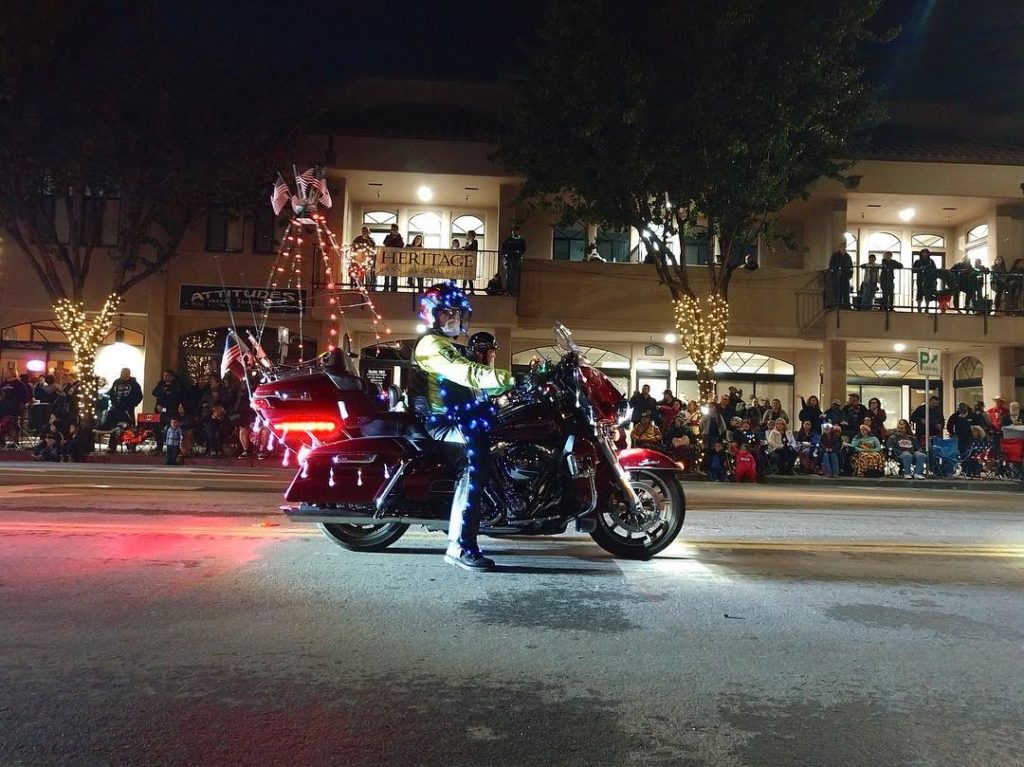 Riding in the 2018 Lights On Parade. Photo by Carmel de Bertaut. The Lights On event and holiday parade brightened downtown Hollister on Nov. 24.

Residents lined San Benito Street as 77 parade entries, some on wheels and some on foot, moved through downtown.

“It is pretty colorful and I like all the lights,” said resident Leila Sadeghian. “It brings the whole community downtown.

The theme of this year’s holiday event was “Through the eyes of a child.” The parade was led by Jamie the Elf, though Santa Claus and Mrs. Claus rounded out the evening.

Fourth-grader Maya Betancourt, who took part in the parade with the Hollister youth band, said the best part was “I got to hang out with all my friends and I got to be in the parade.”

The Lights On event and parade were sponsored by several organizations, including PG&E and Community Foundation for San Benito County.

Prior to the start of the Lights On parade, locals gathered downtown to check out vehicles partaking in a car display. While only six cars participated, folks still gazed at the colorful paint jobs.

Tony Armenta, vice president of Central Coast Muscle Cars and Classics, said he was expecting more than six car owners participating in the car display, but believed the weather was a factor.

Armenta owns a black and red 1969 Dodge Dart. He said he painted it, completed the interior, installed the vinyl top, and rebuild the motor in the 10 years he has owned it.

The interest in cars was passed down from his dad, Armenta said, at an early age.

AJ Moreno and his son, Nixon, displayed a black 1971 Chevelle SS 454. Moreno said he bought it less than a year ago, the primary reasons being to take his family cruising as well as introducing his son to the car culture.

Moreno said he has not put work into it, but is getting ready to do some maintenance under the hood. Buying the Chevelle was on Moreno’s to-do-list since his dad refused to buy him a 71 Chevelle for his first car when he was 16.

“Every time I’d see it on the road I would cringe,” Moreno said. “When we started talking about getting a car that was definitely first on my list.”

The sound, smell, and looks is what makes muscle cars attractive, Moreno said.

Ed Guiza has owned his 1970 Plymouth Road Runner since 1992. It has a 440 engine, automatic transmission, Flowmaster mufflers and modified suspensions.

“It’s loud and obnoxious, but that’s how those cars are,” Guiza said.

The car’s horn, to go along with the vehicle's theme theme, makes the Looney Tunes’ Road Runner sound.

Guiza said he would always take his two children (now 22 and 25) to car shows in the Road Runner and he doesn’t plan to get rid of it. Instead, they might have to bury him in it, he said.

Guiza has also taken the car on the Laguna Seca race track, but limits how much he puts the car in “harms way.”

“Once you crash those cars they’re very expensive to repair again,” Guiza said.